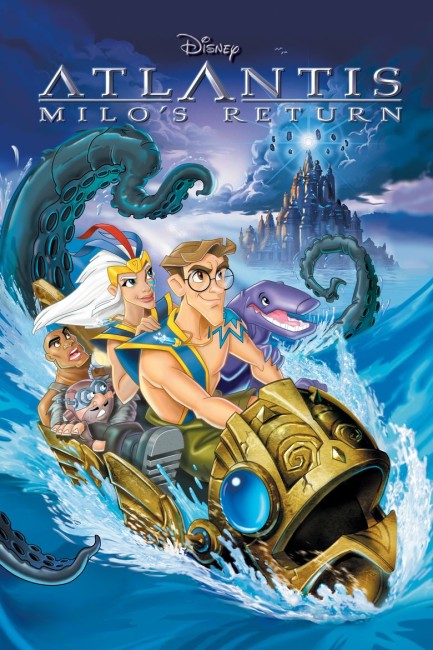 Kida is now the Queen of Atlantis and is well along with rebuilding the city with Milo’s aid. Whitmore and Milo’s other friends from the expedition then make a return. A monster described as being like a Kraken is endangering shipping and they believe it is something akin to the Atlantean Leviathan. Milo and Kida join the expedition as they travel to the town of Krakenstad, where the Kraken hides, ruled over by the possibly immortal Edgar Volgud. Next, they travel on to deal with sand coyotes that have emerged from an American Indian burial ground. This is followed by their having to recover a spear of great power that has been stolen from Whitmore by a madman who believes himself to be the Norse god Odin.

Atlantis: Milo’s Return is a sequel to Atlantis: The Lost Empire (2001). It is a surprise that Disney made a sequel to Atlantis: The Lost Empire, due to the fact that it was one of the least successful of their recent animated hits at the box-office. Although, if anything, Milo’s Return gives the impression of having started as one of the spinoff tv series that Disney frequently make to accompany their animated films and then abandoned after The Lost Empire flopped and the results quickly edited together for video release.

The story seems exactly like three episodes designed to fill half-hour timeslots – one about the journey to the Kraken, the second with the sand coyotes and the third about the spear of Odin. While the original film had an epic feel, Atlantis: Milo’s Return, if anything, now resembles a Tintin story with its band of oddball adventurers.

Sadly, the exercise is thoroughly banal and never amounts to anything more than routine tv filler. In fact, Atlantis: Milo’s Return is probably the slightest and most insipid of all Disney video sequels – you get the impression the animators didn’t care about the stories they were telling. The film is made in the typical limited animation style of these Disney video sequels.