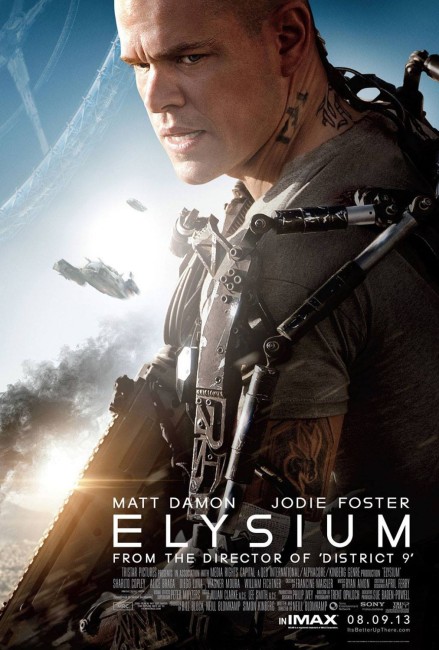 The year 2154. The Earth has become polluted and exhausted. The wealthy live in the space station Elysium, enjoying a life of privilege with medical technologies that can cure any disease, while the working poor have been abandoned in shantytowns back down on Earth. Max DeCosta has grown up in L.A. and always dreamed of being able to make it to Elysium. He has had a chequered life as a car thief but has gone straight and is now working a factory job. While on the job, he receives a fatal dose of radiation and is given five days to live. He goes to his old underworld compatriots and bargains to get aboard a shuttle to Elysium, hoping to use the medical technology there to affect a cellular regeneration. They ask as part of his price that he take part in a heist. Max is outfitted with an armoured exo-skeleton and they hijack the shuttle of John Carlyle, the CEO of the factory, where Max downloads the information stored in Carlyle’s head into his own. What they then realise is that this contains all of the information about the Elysium defence grid that has been given to Carlyle by its Defence Secretary Delacourt who is attempting a coup against the station’s president for not allowing her to take a hardline on incursions from Earth. When Delacourt realises what Max has done, she assigns the mercenary Kruger and his heavily armed team to eliminate him.

Director-writer Neill Blomkamp made an amazing appearance from nowhere with District 9 (2009). This was produced by Peter Jackson while Blomkamp had earlier been attached to direct Jackson’s proposed big-budget adaptation of the Halo videogame after attracting attention with a series of Halo-based short films. With its mix of biting social parable and hardware-heavy action scenes, District 9 became a sleeper hit. It made Neill Blomkamp, who was born in South Africa but had lived in Canada since his teens, into a name with considerable buzz. Prior to District 9, Blomkamp had only directed five short films and had worked as a visual effects animator. Elysium was Neill Blomkamp’s highly anticipated second film.

With Elysium, many of Neill Blomkamp’s weaknesses that were evident but not as obvious in District 9 become more apparent. Blomkamp feels like a director who cannot seem to decide whether he is trying to be James Cameron or Michael Bay. From Cameron films such as The Abyss (1989), Terminator 2: Judgement Day (1991) and Avatar (2009), Blomkamp has inherited the idea of harnessing top-drawer effects technology in the service of great parables of humanism and liberalism. From Michael Bay, Blomkamp has taken a fascination with massive displays of hurtling military hardware and a desire to show everything in sight being pelted with gunfire and blown up.

The early scenes here amaze with Blomkamp’s creation of a working space station – the science-fiction geek in one thrills at the first arrival at the station and seeing the toroid landscape curve up into the sky (although the biggest bugbear to me was the lack of scientific credibility in these scenes such as having the inner circle of the station open to the void – ships come in and land without having to go through any docking or airlocks. Do the designers simply think that all the air is going to stay there because it wants to?)

Both of Neill Blomkamp’s films so far hold stinging social parables. District 9 was a savage political allegory for apartheid era South Africa with the aliens standing in for the dispossessed Blacks and Coloreds under the white regime. Similarly, Elysium becomes another film of the Occupy era tackling the social divides exposed by The Recession, alongside the likes of In Time (2011), Cosmopolis (2012), The Dark Knight Rises (2012), Assault on Wall Street/Bailout: The Age of Greed (2013) and The Purge (2013).

Blomkamp sees a future Earth caught between a financial elite who live in a gated paradise while the poor and working class are forced to live in horribly polluted shantytowns outside their doors. Elysium is a science-fiction fantasy, not unlike In Time, of the poor and dissolute storming the walls of the gated utopias and conducting a social revolution that allows privilege to be freely distributed for all. Not to mention that it has a pointed parable about medicine being democratically distributed that came out at the same time as the politically divisive issue of Obamacare.

The disappointment of Elysium (and the latter half of District 9) is that having set up an amazing milieu filled with all manner of trenchant social critiques, Blomkamp loses either film when it comes to the third act. Here he turns Elysium into an action film amidst much gunfire, things blown up and vehicles flying about. (Exactly the same happened with District 9).

I have no complaints with his handling of the action scenes – these are exciting and get the pulse moving, while the geek in me kept grooving at some of the nifty pieces of hardware and technology that he keeps serving up – but I felt like I was in the midst of a film that had promised to be much more than that at the outset.

Once we get to Elysium, the film does almost nothing to explore life there or the social conditions that created it; instead, all that we end up with is a bigger-budgeted version of Lockout (2012), a film that had no pretensions about being a comic-book of an action movie. That and a few dashes of the mnemonic courier plot taken from Johnny Mnemonic (1995).

I like Matt Damon as an actor but had problems with the film as soon as I saw the trailer with him going into action with shaven head. Damon does a certain type of role well but seems awkward with pasty white shaven skull trying to fill the boots of what should have been a Vin Diesel role that radiates streetwise toughness and nonchalant cool. Apparently, the role was originally offered to rapper Eminem and you could see that working – Eminem does the whole ‘hood kid trying to do good well, whereas Damon seems out of his natural social league trying to rough it and convince us he belongs in the barrio.

Similarly, Blomkamp casts Jodie Foster as the villain of the show. This is something I was looking forward but the great disappointment of the film is that is casts an actress of Foster’s calibre but only ends up placing her in a one-dimensional role that is singularly lacking in any interesting features.

(Winner for Best Production Design, Nominee for Best Special Effects at this site’s Best of 2013 Awards).