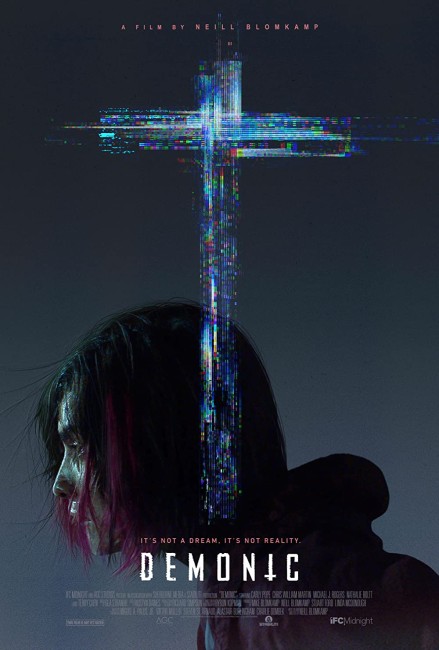 Carly Spencer is contacted by Therapol, a private medical research company, who have her mother Angela a patient at their facility in a coma. Carly has not spoken to her mother for twenty years after she went crazy and was jailed for setting a seniors centre on fire. Therapol introduce Carly to the experimental virtual reality system they have created that can allow someone to enter her comatose mother’s mind and meet with her in her dreamscape. Carly agrees to go in, although her mother immediately urges her to leave. As the Therapol doctors press her to return, Carly discovers that her mother has become inhabited by a demonic presence.

South African director Neill Blomkamp had a big worldwide hit several before this with District 9 (2009), a potent mix of visual effects and biting social commentary that immediately had people rushing to call it a new science-fiction classic. Blomkamp followed this with the equally ambitious Elysium (2013) and the ridiculous Chappie (2015), neither of which delivered the promise that had been heaped upon his shoulders with District 9.

For Blomkamp, this was followed by several years of announced projects – a touted Alien sequel with Sigourney Weaver, a Robocop sequel and what was promised to be a revolutionary idea of making a series of promo shorts to test the potential for a completed film – none of which came about. Blomkamp finally returns with Demonic, which was shot during the Covid pandemic lockdown of 2020-1. Demonic should not be confused with the earlier James Wan-produced Demonic (2015).

Blomkamp’s interest in the film comes from a visual effects perspective. In this case, his interest was piqued by the Volumetric Capture process, which is used in 3D modelling for videogames and virtual reality systems. As far as I understand it, the process creates a three-dimensional computer model in much the same way as the motion capture process does but in photographic detail and builds everything out into a virtual figure or set that can be moved, rotated and so on in any way that one likes.

Blomkamp has clearly shot the film on a medium budget using the resources immediately to hand as did a number of other filmmakers during the pandemic. This resulted in films conducted with limited casts and crew, while bigger more spectacular aspects like action sequences and crowd scenes involving extras were kept to a minimum. This is noticeable here where you feel that a number of sequences have been curtailed far more than they should have been – we see an impressive suiting-up montage as Michael J. Rogers and Terry Chen prepare to head to the hospital to fight the demon but the actual confrontation is never seen, all we get is Carly Pope turning up in the aftermath to find wounded soldiers. Similarly, apart from a few scenes where a monster appears in the shadows in the simulation, we never actually see Nathalie Boltt possessed even though that is supposed to be a central aspect of the story.

Indeed, there is little that Demonic has in common with the standard possession film – for a more detailed overview of the genre see the essay Possession Films. Ever since The Exorcist (1973), the genre has been filled with the same rarely varying images of the possessed with cracked face tied to a bed, taunting obscenities, levitating and rotating heads and the like while Catholic priests stand on chanting “the power or Christ compels you.”

Neill Blomkamp has next to zero interest in following any of the dictates of the genre and must be commended for trying to add something different to the mix. The idea of possession and Virtual Reality was first tried (sort of) in Brad Peyton’s Incarnate (2016), although that was a more standard possession and exorcism film. Although in actuality the idea goes all the way back to the Synchronizer that was used to enter the dreams of Linda Blair in Exorcist II: The Heretic (1977). If anything Demonic belongs more in the territory of The Cell (2000) and the whole body of dreamscape films that have followed from it wherein someone enters the mental landscape of a disturbed individual.

On the other hand, the Virtual Reality scenes feel as though Neill Blomkamp was more absorbed by exploring the technical process than he actually was in making a film. Certainly, what must be said is that this feels like the first film that actually approximates what VR would resemble rather than the cheat most film depictions opt for in creating a full sensory immersion experience that funnily enough resembles this world. There is a certain fascination at the outset to seeing foliage, buildings and people rendered in flattened digital representations broken up with occasional digital  static but beyond the initial novelty it is not that interesting.

Where you expect the climactic scenes of the film to involve the invocation of a series of rituals to drive out the demon, what we have seems more like a standard copy of Aliens (1986) with armed people stalking around a darkened complex hunting a monster. All of which seems about as far away from the theological debate and shock theatrics territory of The Exorcist and its ilk as it is possible to get.

In fact, all of the places that you want Demonic to go – to show us the possessed woman taken over by a demon, the battle between priests and demon, the exorcism process – is something that Neill Blomkamp either avoids and does not seem interesting in following, adding up to an oddly flat and lacklustre film.