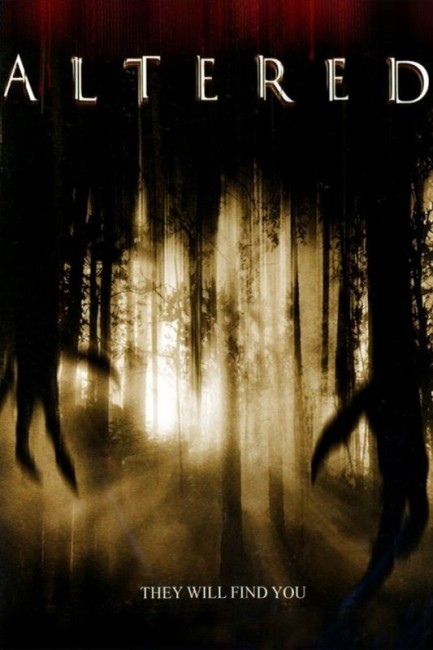 Three friends, Cody, Duke and Otis, succeed in capturing an alien. Not knowing what to do, they take it to a mutual friend Wyatt. All of them were abducted by the aliens fifteen years earlier, although Cody’s brother Timmy failed to return. With the alien bound in Wyatt’s garage, the hot-headed Cody wants to kill it in revenge for Timmy but Wyatt argues that this will only bring the other aliens after them. The imprisoned alien succeeds in taking over Wyatt’s girlfriend Hope’s mind and then infecting Cody with its bite, causing him to start mutating. With tension between the members of the group at a maximum, Wyatt thinks that the aliens, who left him altered in some way during the abduction, have returned for him, despite his attempts to hide.

The Blair Witch Project (1999) was one of the last great cinematic phenomena that came before the turn of the millennium. It was a no-budget, shot-on-video film by a budget of non-industry professionals that became a mass-market phenomenon and one of the top grossing films of the year. There were a number of copies of Blair Witch, not to mention an even greater number of parodies, while the raw low-tech style and the pretence of it being found video footage was immediately emulated by a host of other films.

The great surprise about The Blair Witch Project was that co-directors Daniel Myrick and Eduardo Sanchez subsequently failed to capitalise on that success in any major way. As there always is after a massive hit, their agents’ answer-phones must have been white hot with offers. Surprisingly, neither Myrick nor Sanchez took up any of these for several years. They oversaw the obligatory sequel Book of Shadows: Blair Witch 2 (2000) but even there it appeared that they had both done a George Lucas and retired from the limelight at the peak of their success – only, unlike George Lucas, neither of them put out any other films in any capacity.

One was happy to consign Myrick and Sanchez as one-hit wonders up until 2006 when we suddenly heard from both again – albeit separately and no longer as a creative team up until they returned as producers of Blair Witch (2016). Daniel Myrick turned up as producer of a number of dvd-released horror films, including Rest Stop (2006), Sublime (2007), Otis (2008), Alien Raiders (2008) and The Presence (2010) and returned to the director’s chair with Believers (2007), Solstice (2008) and The Objective (2008). Eduardo Sanchez simultaneous made a return to the director’s chair with Altered, which was released directly to dvd, and subsequently made the horror film Seventh Moon (2008) and Lovely Molly (2011) and co-directed ParaAbnormal (2009), the A Ride in the Park episode of V/H/S/2 (2013) and Exists (2014).

Happily, Altered confirms that The Blair Witch Project was no one-hit wonder. Altered is immediately a film that sits well above the rest of the crowd. It is a small masterpiece of conceptual economy – it features only a handful of actors and Sanchez has managed to contain the action within a single garage for 98% of the film’s running time. (One was immediately reminded of Albert Pyun’s rather dreadful Deceit (1989), a film about a possibly alien visitor that spent the whole of its running time contained within a warehouse). Sanchez immediately draws us into the film’s grip – plunging us into the midst of a situation that we can see within moments is rapidly spinning out of control. Once he gets to the central location, Sanchez keeps winding up the tensions and conflicts and putting unexpected twists on them. His ability to ride up and down a rollercoaster of tensions and twists throughout comes with considerable expertise.

Eduardo Sanchez has more of a budget to hand than he and Myrick did in The Blair Witch Project. Among other things, Sanchez is not unstinting when it comes to piling on a considerable level of gore, which leads to some of the film’s most outré scenes. There is the genuinely out there moment when the others burst into a room to find the alien holding several feet of Brad William Henke’s intestines torn out of his stomach and threatening to sever them. Not to mention Adam Kaufman’s having the task of trying to pile them all back in once the alien is subdued. There is an especially wild scene where Paul McCarthy-Boyington, whose body has been eaten away by the alien infection to the point that bones are showing through, is mind-controlled by the alien and made to keep attacking Adam Kaufman at the same time as his own body is smashing apart.

In some ways, it is not hard to imagine Altered as a sequel to the supposedly true-life alien abduction film Fire in the Sky (1993), which was about a group of rural characters out of their minds and paranoid in the aftermath of an abduction experience. Eduardo Sanchez has an excellent cast on hand who all do an exceptional job in creating their characters. Paul McCarthy-Boyington gives an excellent performance as the white trash hick with a hair-trigger temperament. Adam Kaufman is also fine in the leading role, providing a handsome certainty and level-headed balance amid the panicky chaos around him.

My main problem with Altered was its inconclusive ending. [PLOT SPOILERS]. Sanchez just fades out with Adam Kaufman having blown the house up, causing the alien mothership to depart, and then he and Catherine Mangan departing, hoping to evade the aliens. It is an ending that fails to explain why the aliens are coming after him. It is especially a letdown on the title and various references throughout, which leads us to expect that Adam Kaufman has in some way been altered by his experience. In the failure to explain anything about this at all at the fadeout, Altered cannot help but disappoint, especially in that a good deal of the plot hangs on these issues.