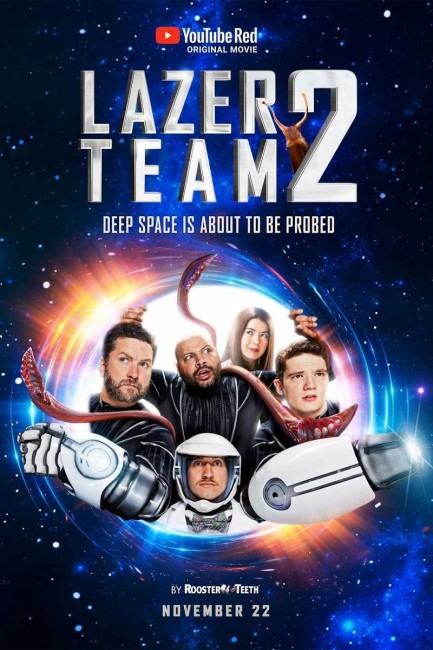 Major Kilborne takes command of The Defence Extra-Terrestrial Intelligence Agency and announces that she is shutting it down. One of the scientists Dr Maggie Whittington protests against this as she has sent Woody Johnson through a wormhole. Maggie contrives to reunite the other three members of Lazer Team on various pretexts. They are all having difficulty adjusting to everyday life since they won the intergalactic tournament against the Antareans. Maggie reopens the wormhole and she and the other members of Lazer Team head through to rescue Woody but are followed by Major Kilborne. Arriving on board an alien ship, they must find a way to stop the Antareans before they take revenge against Earth for their defeat in the tournament.

Lazer Team 2 is a perfect example of the Hollywood think that if audiences enjoyed something the first time then it should be served up again with minimal difference on the assumption people will flock to it again irrespective of quality. I don’t think Lazer Team was anything more than a routine SF comedy filled with easy middle-of-the-road gags. By the point of Lazer Team 2, the gags and characters are placed on a repeat cycle and stretched out to something excruciating.

The only real plot arc the first film had was watching a group of characters that were screw-ups and morons succeed despite themselves. Lazer Team 2 just extends it further, although without the deadline of an intergalactic tournament to drive the drama. I don’t like films where comedy is based on intolerance or poking fun at groups of people – this jeers and makes fun of the lady scientist (Nichole Bloom) for being a nerd at various points. Much of the film also consists of the various members of the team throwing smart-ass insults at one another. That and coming up with demeaning names for the alien that aids them – suggesting cooking fish or calling it spaghetti face. Oh and lots of jokes about Colton Dunn about eating the contents from an alien toilet.

There has been much debate of recent about the death of expertise in contemporary American intellectual discourse – how experts in fields like epidemiology, vaccination, nutrition, climate science and the likes are routinely ridiculed and their views made to share an equal footing with the hot air opinion of someone sounding forth in an internet forum. This has been particularly savage when one watches the US’s attempt to combat Corona Virus – anyone remember hydroxichlorine or injecting bleach? the antimaskers? Lazer Team 2 is like an embodiment of those attitudes – how know-nothing guys armed with merely cocksure attitude and a bunch of sarcastic one-liners can save the Earth against heavily armed aliens, while ridiculing and making put-downs about the scientist of the show. If these are the saviours of humanity, we are doomed.