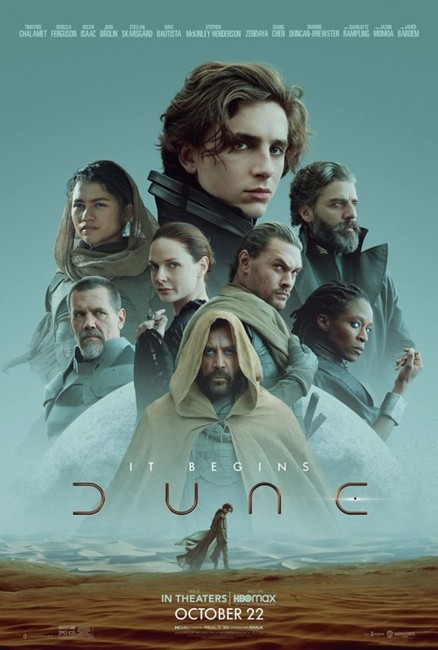 The desert planet Arrakis is the source of the all-important spice used by the Guild Navigators to travel through space. The emperor decrees that House Harkonnen hand Arrakis over into the care of their bitter rivals House Atreides. On the Atreides homeworld Caladan, Paul, the son of Duke Leto, is visited by Reverend Mother Mohiam of the Bene Gesserit, a sisterhood who are engaged in a breeding program to manipulate the bloodlines of the empire. She gives Paul a test and questions him about the dreams he has been having. After their arrival on Arrakis, Paul develops a fascination with the culture of the native Fremen, a fierce people who live in the deep desert regions. However, soon after settling in, the Atreides are betrayed from within as the Harkonnen lead a military force to take back Arrakis. Paul and his mother Lady Jessica flee into the desert and take refuge among the Fremen where Paul sees that this is where his precognitive dreams have been leading him.

Frank Herbert’s Dune (1965) can lay claim to being one of the all-time classic works of science-fiction literature. Herbert created a complex work about a desert planet and its culture nd the intergalactic political machinations that surround it. Herbert drew inspiration for Dune while working as a journalist and being assigned to write an article about the ecology of sand dunes in Oregon. The success of Dune led to a series of book sequels – Herbert wrote five sequels, which expanded on the intergalactic politics to the point they became complex they were difficult to follow, before his death in 1986. In the 1990s, Herbert’s son Brian and Kevin J. Anderson, known for writing a number of The X Files and Star Wars spinoff novels, collaborated to publish a series of Dune books that first expand on manuscripts that Herbert left unfinished and then built out ideas and background events in the series. These have become so prolific they extend to (as of the film’s release) six entire trilogies.

The book has been filmed twice before. Perhaps one should say two-and-a-half times as the first was Alejandro Jodorowsky’s never-made attempt in 1976 – see the fascinating documentary Jodorowsky’s Dune (2013) for details on this wild-sounding project. Ridley Scott was also involved with an attempt in the early 1980s. The first version to actually emerge on screen was the David Lynch directed Dune (1984), which is widely regarded as unsatisfactory by fans of the book and even deplored by Lynch himself, but is a rich and interesting film in its own right. Far more faithful to the book was the tv mini-series Dune (2000), which gives the story strong and effective life. This led to a sequel with Children of Dune (2003) based on Herbert’s first two book sequels. John Harrison and Richard P. Rubinstein, director and producer of the mini-series, are credited as executive producers here.

This remake became caught up in production hell throughout the 2000s/2010s with names attached that made you cringe – the idea of it being made by right-wing pro-military flag waver Peter Berg known for films like Battleship (2012) and Lone Survivor (2013), or Peter Jackson turning it into one of his films driven by effects spectacle and thuddingly heavy-handed amateur symbolism – and others that left you undecided – such as Pierre Morel who went on to make Taken (2008).

The project was eventually taken up by Denis Villeneuve, a Quebecois (French-speaking Canadian) director who first appeared with the French-language likes of August 32nd on Earth (1998), Maelstrom (2000) and Polytechnique (2009) then gained recognition with the international hit of Incendies (2010), which was nominated for a Best Foreign Language Film at the Oscars. Villeneuve found wider acclaim with his English-language debuts with the doppelganger film Enemy (2013) and the psycho-thriller Prisoners (2013), followed by Sicario (2015). Villeneuve then took up science-fiction subjects with Arrival (2016), which had him nominated for an Academy Award for Best Director, followed by Blade Runner 2049 (2017).

Dune: Part One finally emerges on screen less than you feel it should have been. Its’ release had been held back over a year because of the Corona Virus shutdown of theatres. During this time, Warner Brothers implemented their controversial policy of same day release to theatres and streaming platforms. In the midst of this, Dune: Part One did a not immodest $40 million opening weekend return, which is probably $100 million or more less than it would have done in normal circumstances. Given that this is only a quarter of the film’s $165 million budget, there was some question over whether this would be enough for the studios to give Denis Villeneuve the backing to make Dune: Part Two. However, the second part was given the greenlight a week after this film’s release.

Dune: Part One emerges with a determination to do the book justice. This it does in roughly equal amounts to the extent the other versions do, changing little bits here and there. The 2000 mini-series adhered more faithfully to the text the way it was written in the book. This generally does, although opens the beginning out so as to give us more of an explanatory background about the political scenario and the rivalry between the houses. It is some twenty minutes into the film, for instance, before we get to the gom jabbar test scene that opens the book and 2000 mini-series. The only major addition to the book that I picked up on was a scene where Reverend Mother Mohiam visits the Harkonnen home world and appears to be in collaboration with the Harkonnens and pleads for Paul and Jessica’s lives.

Thereafter though, Villeneuve and his co-writers follow the book on all its major beats, giving each scene life. There’s a feel for the world of Arrakis and the culture of the Fremen and the intergalactic politics. For the first time, we get a film treatment that actually shows us Paul’s visions of the future under the influence of the spice, something that even Frank Herbert left undescribed.

Of the three versions of the book, I have to say Denis Villeneuve makes the best of these from a dramatic standpoint. The 1984 film works the best in terms of visuals and design; the 2000 mini-series works the best in terms of telling the story the way Herbert wrote it. Villeneuve is an exceptional dramatist. Lynch can be an excellent dramatist too – see The Elephant Man (1980) – but as a director his interest is principally in surrealistic visuals. Here however Villeneuve absorbs us into the drama of the meeting with the Fremen, the fight with Jamis, the Harkonnen strike back on Arrakis and so on.

Through his various dalliances with the SF genre, Denis Villeneuve has gained an expertise with visual effects and these lead to some of the best sequences of the film – the Harkonnen invasion of Arrakis and in particular the rescue from the spice harvester. The hardware and various spaceships coming into their landings look visually stunning. When I originally read the book, I first came across the term ornithopter – a flying machine that flies by imitating a bird and flapping its wings – but was disappointed to never see this depicted in any of the other films. One of the things that delighted me here was seeing these brought to life as a series of dragonfly-like flying machines. The other thing that Villeneuve does is tease out the appearance of the sandworm, giving us only hints and then making the first time we see it into the big climactic set-piece of the film.

Surprisingly, there are several aspects on which I think the 1984 version is the superior. One of these is the design. Dune 1984 was a stunning work of design with individualistic looks for each of the planets – Caladan in deep woods, Giedi Prime as a dark industrial nightmare world; and a series of baroque technologies throughout. At almost complete contrast, Villeneuve creates a world that feels sparse, although is by no means unimaginatively designed. Rooms are frequently vast echoing and empty of all but a single item of furniture; the Baron and Duke confront one another in a room separated by a vast conference table; Paul goes to the Reverend Mother who sits on a chair in a circle in the midst of a room where the walls are in darkness and so on.

The other aspect where the 1984 film definitely had the edge is in terms of the casting. Timothee Chalamet is not an actor that draws you to him. He comes with a certain aristocratic superiority and haughtiness – although of all the actors to appear in the role, he is the only one who seems like the teenage Paul that Herbert described. I look at Chalamet’s performance and wonder what it is about his poutiness that has the charisma that is going to fire up the Fremen and lead a galactic revolution. When it came to their airings of the role, both Kyle MacLachlan and Alex Newman give fine performances that you felt had what it takes to inspire the masses. Maybe it is something we will see if Dune: Part Two but it is not in evidence here.

Oscar Isaac makes a solid Duke Leto. On the other hand, Rebecca Ferguson seems too ordinary as Lady Jessica. What seems lacking in Ferguson’s performance is the regal elegance of Francesca Annis in the 1984 film. Similarly as Baron Harkonnen, Stellan Skarsgård is a flying fat man but has nothing on the perverse grotesquerie that Kenneth MacMillan gave the Baron in the 1984 film. (The Harkonnen scenes are oddly lacking a Feyd-Rautha, although this was a character that Herbert did not introduce until later in the book so it may be that Villeneuve is holding back until Part Two). Neither this film’s Stilgar or Chani get enough screen time to see which ways they are going to go. Charlotte Rampling, her face entirely hidden behind a veil, makes a coldly autocratic Reverend Mother Mohiam. The only unreserved triumph of the film ends up being Jason Momoa who gives us a Duncan Idaho that is spirited and full of life.