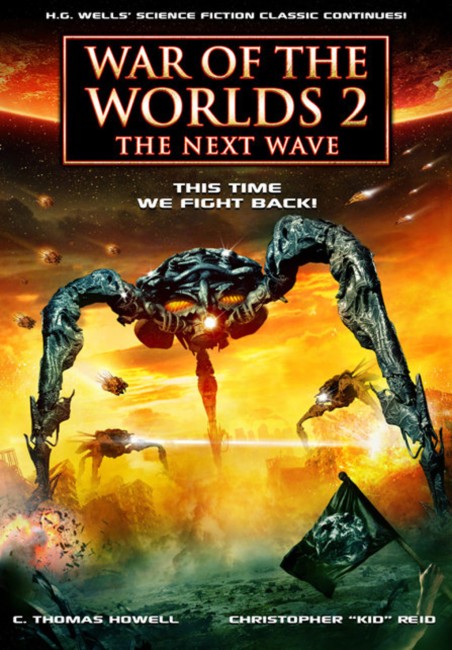 Civilisation is in ruins in the aftermath of the alien invasion. George Herbert is living in a cabin with his son Alex while assisting the military. At the nearby military base, former NASA scientist Victoria Reed has found a means of reverse engineering Martian technology to retrofit fighter planes. She detects a new wormhole appearing and they are witness as a host of new alien war machines emerge to attack the Earth. George is shattered when he sees Alex hit by the teleport ray from one of the war machines and runs towards the machine, allowing himself to be blasted. He finds himself transported aboard the alien ship as it heads back through the wormhole to Mars. There he finds himself in a simulation of an Earth city built on Mars where the aliens are testing viruses in an attempt to eliminate humanity. Through all of this, George tries to find Alex, defeat the aliens and discover a means to get back to Earth.

War of the Worlds 2: The Next Wave was made as a sequel to The Asylum version. (Where I was living at the time, it had the rather amusing effect of being assumed by videostores to be a sequel to the Spielberg film – the other two 2005 versions not being so well known – and you could find copies of it and the Spielberg film sitting together on shelves while it was almost impossible to find a copy of The Asylum original). Here original director David Michael Latt steps back to produce and co-write while the director’s chair has been given over to C. Thomas Howell, the star of the first film, who used the opportunity to make the first of several films he would for The Asylum (see below).

There is surely something daunting about conducting a sequel to a work that is such a landmark classic as the H.G. Wells novel. Not too unexpectedly, The Asylum throw most of the Wells story out the window. For that matter, they throw many of the details of the previous film out too. For example, the first film kept faith with the Wells story and had the war machines disintegrating humanity with a heat ray but here the heat ray has conveniently been rewritten as no more than a beam that teleports people aboard the mothership.

In the first film, the war machines were six-legged, while here they have been truncated to two-legged machines. The first film also eliminated any mention of Mars from the story (quite possibly due to astrophysical reality) but that is restored here – although it is never directly mentioned as the home of the invaders. Oddly, while the film does feature war machines, we never see any of the aliens themselves anywhere throughout.

The film itself is a combination of the usual Asylum cheapness and ambition that goes way beyond the scope of the budget to ever convey it. Apart from a couple of matte shots of a destroyed Washington D.C., the destruction of the world is not portrayed at all. There is some nonsense about the aliens having built simulation of an Earth city on Mars as a testing ground for their biowarfare experiments so that The Asylum can shoot all the Mars-set scenes on the cheap using a bunch of local (L.A.) streets.

On the other hand, you cannot deny C. Thomas Howell’s undeniable ambition – he creates massive Star Wars (1977)-like dogfights between refitted Air Force fighters and alien ships, scenes of the squid walkers roaming the streets and the like – where the imagination that has gone into them clearly far outstrips the budget that was on hand to deliver the effects (which are certainly better than usual for The Asylum).

C. Thomas Howell was a teen actor during the 1980s who has become a B-budget regular since then. He starred working for The Asylum with War of the Worlds and The Da Vinci Treasure (2006). He branched out as a director for The Asylum with a handful of films, including The Day the Earth Stopped (2008) and The Land That Time Forgot (2009). As in the previous film, Howell plays the hero while casting his own son Dash as the son of his character. Here Dash has grown up a little and Howell casts him in a more prominent role. Now one of the overriding themes of the film is how dedicated Howell’s character is to his son with he frequently voicing saying lines of “nothing else matters but my son” as he recklessly races into danger to save him.