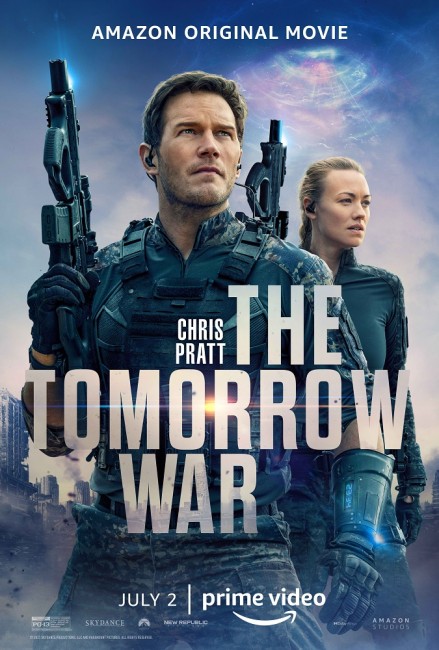 In 2022, high school chemistry teacher Dan Forester is at home watching a live televised soccer game when a portal opens and the pitch is invaded by troops. They state that they come from the year 2051 where the Earth has been invaded by aliens and humanity almost entirely obliterated. Their return has been allowed by the creation of the Jumplink that allows travel between two points in time. The governments of the world agree to recruit people to send through the Jumplink and join the fight, although only 30% of those sent through make it back. Dan enlists and joins a body of untrained civilians as they jump through to the future. There they immediately come under heavy attack from the near-unkillable aliens known as Whitespikes. Dan is guided by the military commander in the future, which proves to be none other than his now adult daughter Muri. Dan is co-opted into helping her capture a Whitespike in order to find a vaccine that could defeat the enemy. In the process, Dan realises that to do he must choose between saving the future and abandoning Muri to die.

The Tomorrow War was another film that ended up being a casualty of the 2020 pandemic. Originally slated for a theatrical release on Christmas Day of 2020, it ended up instead being sold to Amazon Studios and released to streaming in July of 2021 where it proved to be purportedly the most watched film on Amazon’s Prime Video service.

The film comes with the peculiar choice of director in Chris McKay had previously worked in tv animation, most notedly as a director and producer on Robot Chicken (2005- ). McKay made his feature-length directorial debut with The Lego Batman Movie (2017). The script comes from Zach Dean who previously wrote another SF/action film 24 Hours to Live (2017) and before that the heist film Deadfall (2012).

There is a good and solid idea at the heart of The Tomorrow War. The very title The Tomorrow War promises the exciting idea of two different factions travelling throughout time, warring for the future, seeking to alter events in their favour. It reminds of a number of films that we saw in the 1980s/90s fad for Time Travel Films that came in the aftermath of The Terminator (1984) and Back to the Future (1985) – I am thinking of B-budget time war efforts like The Time Guardian (1987) and Apex (1994). You anticipate something akin to the treatment in books like Fritz Leiber’s The Big Time (1961) or Tom Sweterlitsch’s The Gone World (2018), which had been promised as a film by Neill Blomkamp.

Unfortunately, The Tomorrow War raises interesting possibilities but fails miserably at a level of basic plausibility. For one, you have to laugh at some of the military tactics used in the film. The idea of sending untrained civilians off into a combat situation seems ridiculous. While Chris Pratt does have prior military experience, we also see recruits who don’t even know which way an ammunition clip goes into their gun. It is probably no surprise that so many of the recruits end up being killed. The other absurdity is that when the recruits are sent into battle, they seem absurdly underpowered for the enemy they are dealing with. They are using modern automatic weapons and sidearms that seem to have next-to-zero effect on the aliens except when close up – why not outfit them with explosives and armour-piercing rounds? And given that the aliens seem near-invulnerable, it then seems either contradictory or preposterously superheroic to see Chris Pratt defeating one of them with his fists at the climax.

There’s also the opening premise where soldiers appear out of a portal in the midst of a soccer field and appeal to the world to send recruits to fight in the future. And surprisingly enough the rest of the world signs up and allows civilians to be recruited. Now in the real world any politician that willingly signed the populace up for a war where 70% of those sent into combat are killed would find their popularity plummet to near zero – even the massive casualties of World War I only ended up with something like 14% of recruits killed in combat. They would be facing “Hell No We Won’t Go” protests that would make the Vietnam Anti-War effort feel like a country garden tea party. Not to mention in a world where everything we see on tv screens that doesn’t conform to people’s preconceptions is dismissed as ‘fake news’ or where people lead protests against the mild inconvenience of wearing masks to prevent the transmission of a lethal infection, you would expect the debate to become highly politicised.

There is also major holes in the time travel premise. The people from the future travel back in time to recruit people from the past but only those that they know will live into the future. That is all fine except for one small fact – we are told that the 70% of the people they recruit end up dying in the war zone so how is it possible that they also return to live lives in the regular timeline if they have been killed?

And then there is the big dramatic moment where Chris Pratt anguishes over allowing daughter Yvonne Strahovski to die during the Whitespike assault on the Jumplink base in the Bahamas. His anguish is along the lines of “I can’t allow you to stay here and be killed,” while her response is along the lines of “I don’t mind because it’s all about saving the future.” Even when Chris Pratt returns to his own time, he is appealing to Sam Richardson to join the cause with lines about doing it to save his daughter’s life. Unfortunately, what none of the characters nor Zach Dean seems to grasp is the fact that when Chris Pratt returns to the present and does something so drastic as to prevent an entire alien invasion by using the antidote then any future in which Yvonne Strahovski’s character is killed in an alien attack will no longer take place.

I don’t know if it’s my jaded tastes but it feels as though big-budget Action Movies of the 2020s are becoming increasingly more brain dead in their constant efforts to subvert anything that approaches intellectual engagement – something that reviewing Infinite (2021) only three weeks earlier seemed to confirm. The time travel film has always been one science-fiction genre that is filled with conceptually challenging ideas. By contrast, The Tomorrow War feels like anything challenging has been stripped out of the time travel scenario until it is no more than aliens shoot-‘em-ups in the future and then more shoot-‘em-ups back in the present.

Not to mention that Zach Dean writes a script with atrocious dialogue. The lines often feel self-consciously inserted by a writer congratulating themselves on the wittiness of their own dialogue than anything people would actually say – J.K. Simmons’ line “I wish Stevie Nicks would show up in her birthday suit with a jar of pickles and a bottle of baby oil” is probably going to go down on some future list of the most ridiculous lines of the 2020s. Not to mention, Dean inserts elements – the kid with the obsession with volcanoes, Chris Pratt’s father who just happens to repair planes for mysterious backers – that become the Chekov’s Gun equivalent of someone turning up to a pistol duel with a bazooka.

Certainly, what must be commended is that the film fully goes to town in terms of production values. A substantial proportion of the budget seems to have been allocated to the visual effects department and there are some great-looking scenes with the Whitespikes attacking en masse, people fighting them off in a hail of massive artillery fire, helicopters going down as they are swarmed by the aliens in mid-air, and the swarming of the Jumplink platform, including a gorgeous wide-angle shot of Chris Pratt and Yvonne Strahovski’s bodies falling in slow-motion amid a lagoon filled with creatures and aflame. But as I seem to be saying with greater recurrence these days, it is a shame that so much effort has been expended on a work that so little deserves it down at a conceptual or scripting level.