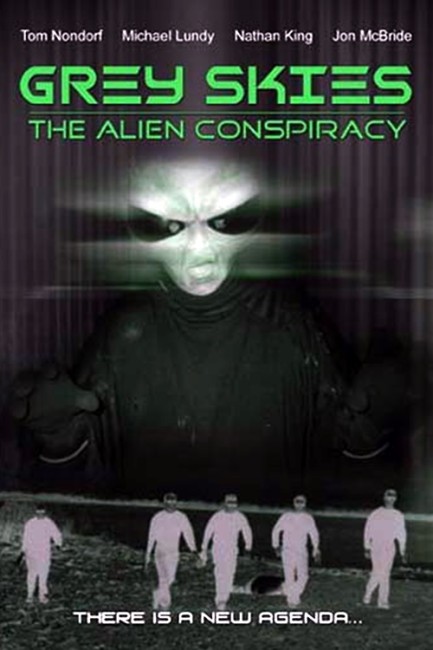 Interviews:- Gonzalez applies for jobs within the biotech industry only to find that a number of his interviewers are not quite human. Abduction:- Danny, the son of two parents involved in the alien resistance, returns to town only to find that everybody has disappeared. The Not-So-Grim Reaper:- Aliens probe the mind of a man shattered by tragedy to try to understand humanity’s fear of death. They watch as the man interviews a jovial Grim Reaper about his job.

The first piece is the hilarious Interviews. The episode hits a wonderfully akilter sense of humour, not unakin to a recurring nightmare, in which a job applicant played by the episode’s director/writer/producer Thomas Nondorf keeps finding the people interviewing him are not entirely human – from the secretary who blankly glares at him and whose lips don’t match the words coming from her mouth; the interviewer trying to enact the instructions on appropriate human behaviour he is getting via an earpiece which, when the hero picks it up, finds is spouting orders to kill him; to the overly friendly woman interviewer who suddenly starts leaking fluid from her elbow. The offbeat note the episode hits is a delight.

The second piece, Kevin Lindenmuth’s Abduction, is slight. The central character’s story will continue in the ensuing films but does not amount to much here. The episode begins with the hero returning to his hometown and finding everybody missing, probably due to an alien abduction. The episode seems to be building to something interesting but cuts off just as the hero is abducted by a UFO and then goes to an enigmatic repeat of the scene where he first arrives in town, but instead changes the direction he takes. Maybe this will all fit into a greater picture in the subsequent films but on its own is inconclusive filler.

The third and longest episode, The Not-So-Grim Reaper, also feels the most out of place. There is a wraparound about aliens probing a man’s brain but that only seems to be there to squeeze the piece into the alien invasion framework. In all other respects, the episode is a light-hearted spoof about The Grim Reaper and has nothing to do with aliens or invasion. The piece falls between the occasionally amusing and the frenetically trying to be funny. There is an occasionally goofily amusing image – the Grim Reaper feeding his son, a baby skeleton wrapped in a blanket, or fending off phone calls from salesmen wanting him to upgrade from a scythe to a tractor. The film indulges in some incredibly corny puns about the Grateful Dead – a line of tombstones going “Thank you, Thank you” – and Plan 9 from Outer Space (1959). By the time we get to appearances from The Easter Bunny, it gets fairly silly. Director/writer/producer Les Sekely also plays the Grim Reaper as a manically skittish character who seems to be doing all his acting with his hands.