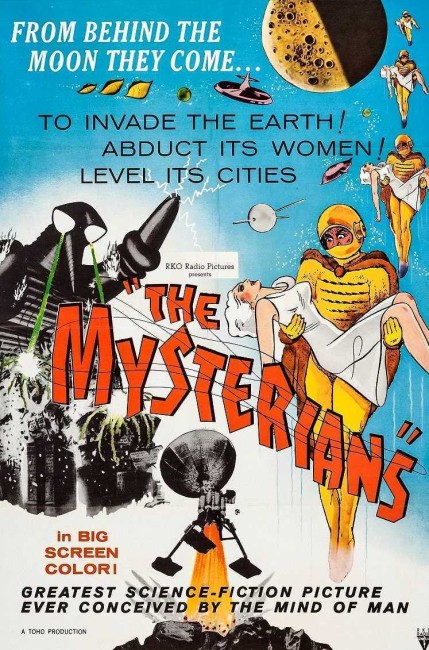 After a Japanese town is destroyed, the military arrive to investigate. They encounter a giant robot that is decimating everything in its path and manage to stop it. A dome then appears out of the ground. A group of scientists are invited to enter. Inside, they meet the alien Mysterians from the planet Mysteroid, a star that once existed between Mars and Saturn but was obliterated. The Mysterians have come in peace – all they ask humanity for is three square kilometres of land and the right to interbreed with Earth women to repopulate their species. Outraged at such a suggestion, humanity declares war on the Mysterians.

Toho Studios and director Ishiro Honda had had great success with Godzilla, King of the Monsters (1954), which enterprisingly copied the American The Beast from 20,000 Fathoms (1953), but where they added their own unique spin to make a startling metaphor for the pain the Japanese felt over the dropping of the atomic bomb on Hiroshima and Nagasaki. Following the international success of Godzilla in 1956, Toho and Ishiro Honda made The Mysterians. In the same way that Godzilla had borrowed from The Beast from 20,000 Fathoms, Honda and Toho likewise turned to American alien invasion cinema and in particular the highly successful The War of the Worlds (1953).

With The Mysterians, Honda and Toho inaugurated the Japanese space opera, a genre that gained its feet during the 1960s. While American alien invasion cinema was generally more anxiety ridden, Japanese alien invasion cinema – films like Prince of Space (1959), Battle in Outer Space (1961), Invasion of the Neptune Men (1962), Atragon (1963), Evil Brain from Outer Space (1964), The Last War (1966), Latitude Zero (1969) and then various atomic monster/alien invader crosshatches such as Monster Zero (1965), Destroy All Monsters (1968), Destroy All Planets (1969), Attack of the Monsters (1969) and Voyage Into Space (1970) – developed into a colourful pulp, filled with wonderful models, costumed superheroes and a madcap array of flashing raybeams.

The plot of The Mysterians scours some of the hoariest cliches of pulp science-fiction and offers up an entertaining blend of giant flying robots, rayguns, UFOs and bubble-helmeted aliens abducting human women. The effects are variable – the giant robot looks like a fat, clunky anteater, while the opticals for the ray blasts look extremely cheap. However, the attack on the dome with scenes of the aliens blowing up planes and melting tanks and with humanity launching a special rocket to save the day is most entertainingly mounted. Certainly, up against this, the human element is almost entirely irrelevant. And the science is downright nonsensical – like the talk of a group of stars located between Mars and Saturn.

It is interesting to make comparison between the Japanese alien invasion films and their Hollywood counterparts of the same era. A strong undercurrent of racism and superiority seems to run through certain aspects of tradtional Japanese society. This plays out in interesting ways in The Mysterians in that the aliens here initially come in peace and for once it is humanity that declares war on them. The reason that triggers off humanity’s declaration of war is when the aliens suggest that humanity give them some women to repropagate their species – clearly the idea of racial interbreeding is such a shocking one that humanity has to not merely decline the idea but to immediately declare war at the very suggestion.

Certainly, when it comes to East-West politics, The Mysterians has some interestingly more liberal things to say that most of the American films of the era did with there being a speech at one point: “Whether they like it or not America and the Soviet Union live on the same Earth … You can be sure that unless all people on Earth unite to fight the Mysterians, the entire Earth will eventually be destroyed.”