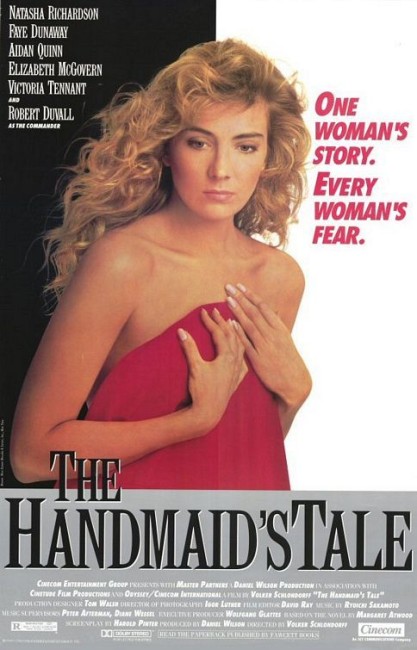 In the future in the fundamentalist Republic of Gilead, formerly the USA, 99% of the female population is sterile. One woman Kate is captured as she tries to cross the Northern Border with her lover and child but is spared execution when it is discovered that she is fertile. She is placed in a dormitory where she learns that she is to become a ‘handmaiden’ and will be sold to be impregnated by and bear the children of Gilead’s ruling elite. She becomes the property of the Commander Fred, now to be known only as ‘Of-Fred’. As the Commander makes effort to impregnate her, he also secretly befriends her in a forbidden relationship. At the same time, Kate/Offred comes in contact with a rebel group who seek to exploit her friendship with the Commander.

Canadian author Margaret Atwood has become celebrated worldwide for her literature and poetry. She is less celebrated for her ventures into science-fiction, even though she has made a number of these with the dystopian The Handmaid’s Tale (1985), the trilogy consisting of Oryx and Crake (2003), The Year of the Flood (2009) and Maddaddam (2013) set in a future and the attempts to genetically engineer a new species, as well as the Positron trilogy of ebooks set in a dystopian future. Atwood states that The Handmaid’s Tale was inspired by the creeping horrors of fundamentalism in the US and her looking towards both how Nazism became accepted by the general population of Germany and especially by the Iranian Cultural Revolution of 1980 where suddenly overnight the populace went from a Western-styled democracy to women being forced to wear the veil.

The Handmaid’s Tale comes to the screen here. The film holds a good deal of respectable clout with names like celebrated playwright Harold Pinter on script and actors such as Faye Dunaway and Robert Duvall attached. Despite this, the film somehow misses the mark. For one, the finesse of Atwood’s often internal tale is blunted and transformed into a portrait of a Dystopian society that is all written in the large, bold colours of Hollywood making a message.

There is no credible resonance to the fundamentalist dystopia – the future world exists in a cultural vacuum – one kept wanting to ask questions like how the world came to be changed so that this society dominated. Characters have names like Aunt Lydia (a campy whip-cracking performance from Victoria Tennant) and Serena Joy that would seem to belong more on the cast list of an Andy Warhol film. There seems no real reason why the rituals of Ceremony with people dressed in coloured cloth and adopting various positions should have become the way they are (the subsequent tv series expanded on these with much greater depth). Moreover, the film criminally alters Margaret Atwood’s ending for something more upbeat.

The Handmaid’s Tale was certainly the most commercially accessible film of German director Volker Schlondorff, best known for The Tin Drum (1979). Being a director more interested in a story’s images than its drama though, Schlondorff comes somewhat unstuck here. There are a few inspired moments when Schlondorff gets to open up and display his visual flair – the aerial shot across the dormitory floor where the whispers of the girls introducing themselves spread around the room; or the first Ceremony with the veiled Natasha Richardson being forcibly held down on a bed between Faye Dunaway’s thighs while Robert Duvall performs the dispassionate act of sex.

Natasha Richardson’s coy, playful acting is very much out of place in a role that requires her to become subservient and anonymous. Robert Duvall is very good, as is Faye Dunaway’s controlled impatient performance. Best of all is Elizabeth McGovern who gives the film a rare sparkle of colour with her warm, cynically alert performance. The film around them though is dour and never manages to come to life.

The Handmaid’s Tale (2017– ) was tv series remake starring Elisabeth Moss in the role of Offred and with Joseph Fiennes as The Commander. This adapted he Atwood book over the first ten-episode season and then subsequently expanded her story further. This adapted the story with superbly grim effect and its first season won eight Emmies including for Best Drama Series and Best Actress for Moss.