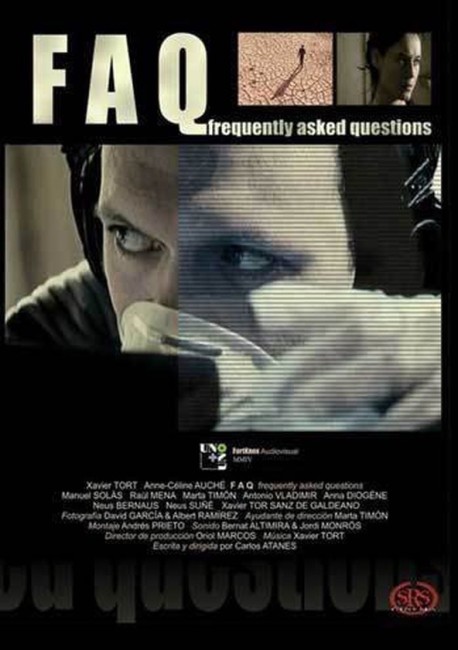 In the future, Paris is ruled by an oppressive matriarchy, The Sisterhood of Metacontrol, who forbid any kind of physical contact between the sexes on the grounds of hygiene. Angeline W.R.S. in inducted into the Sisterhood. Nono, a servant to the Sisterhood who spends his time in cyberspace viewing forbidden images of sensuality, is drawn to her. The two of them travel away together to one of the few remaining fertile areas in the North Pyrenees. On the way back however, Nono stumbles into one of the illegal sexual broadcasts being taped by insurgents and they are arrested.

FAQ: Frequently Asked Questions was a debut feature film from Spanish director Carlos Atanes. Carlos Atanes is a 33-year-old director from Barcelona who has previously made a number of short films. Atanes subsequently went onto make the excellent, reality-bending Proxima (2007) wherein a science-fiction fan makes contact with aliens, followed by Codex Atanicus (2007), a collection of his short films, and two further science-fiction films Maximum Shame (2010) and Gallino the Chicken System (2012).

FAQ: Frequently Asked Questions is a dystopian film. It could almost be, if one could imagine, a variation on George Lucas’s THX 1138 (1971) conducted as a French arthouse movie. There are many similarities to THX 1138 – a future where the controllers of society are obsessed with hygiene and sex is forbidden; where the background of the future is dominated by anonymous voices urging the population to social obedience; and a very similar plot arc where the hero engages in a forbidden liaison with a woman, they are captured, she killed, her breeding capacities resurrected and he flees into an ambiguous place of escape.

For a debuting director, Carlos Atanes’s style and handling of actors has a considerable deal of professional polish. He gets good performances from in particular lead actor Xavier Tort, who has a role that essentially requires to remain passive throughout but where he nevertheless manages to convey a good deal of expressiveness seemingly with his prominent bare forehead alone. Atanes’s depiction of the future is conducted with a spartan minimalism – the controlling cabal of the future consists of three women meeting around a table in a backroom, for instance, while, as in Alphaville (1965), the future is merely contemporary Paris. Atanes directs with a coolly alienating disquiet that holds one’s interest. Particularly impressive here is the musical score, which is composed by the lead actor Xavier Tort, consisting of soulful sax, piano and opera to often haunting effect.

Carlos Atanes has an eye for unusual imagery – Anne-Céline Auché being inducted into the Sisterhood where the other women then put on rubber gloves and masking tape across their mouths before kissing her. There is the odd line, like where she and Xavier Tort depart to the Pyrenees and she requests that he “unwrap the cat and take it with us.” These lead to an at times dry sense of humour upon Atanes’s part – Anne-Céline Auché being followed by sinister heavies in the opening moments, where one of them seems to be ominously reaching for a weapon hidden in a handkerchief, before it is revealed that he is only taking a croissant out of his pocket to eat; the scenes where the militant feminist sisterhood decide to blow up the Eiffel Tower because it is a phallic symbol; or where the hero comes across the revolutionaries making porn movies in the desert with the lead actor (Antonio Vladimir) demanding motivation for his character and complaining that they shouldn’t be treated as objects.

While interesting, FAQ: Frequently Asked Questions also allows its pretensions to get the better of it at times. Though it is a Spanish production, it does have the strong feel of being a French arthouse film – many of the cast are French, the dialogue is predominantly in French and the locations are in Paris. Atanes says that there were several reasons for this, varying from the political iconography that this sets up, his having cast a French lead actress and the alienating effect that the French dialogue provided to Spanish audiences. Whatever the case, FAQ undeniably comes across with the influence (and pitfalls) of French cinema – that is to say that it is more concerned with aggregate non-incidental detail and ruminative character introspection than it is plot. (One critic aptly described French cinema as being about “films where not much at all happens”). This is particularly the case during the middle of the film – during the scenes with Xavier Tort and Anne-Céline Auché wandering around the woods and grounds of a house in the Pyrenees, his making a cardboard coffin to bury the dead cat in, and a scene in the desert where he keeps lifting her seemingly sleeping head on and off of a car horn.

Clearly much of FAQ: Frequently Asked Questions comes laden with a good deal of intended meaning and thought but overall some of this escaped one. Though the film is a dystopian one, there is not the clear sense that there is in almost any other dystopian work of the author having constructed their nightmare future as a warning against some current social trend gone wrong – though Atanes has created a satiric feminist dystopia, one was a little confused about what the central characters were rebelling against.

The film is particularly baffling when it comes to the ending where the hero, who we are told has special abilities to see beyond this realm and into multiple versions of reality, sees his dead girlfriend incarnated in the erotic broadcast and then somehow exercises his abilities and vanishes to appear inside cyberspace with her, only to then emerge out of the broadcast picture and onto a set where they are surrounded by a film crew. I could grasp the idea of a hero projecting himself into a cyberspace broadcast – there seems clear parallels here to Keanu Reeves’s Neo in The Matrix (1999) – although was baffled as to why this broadcast was then shown to merely be a studio set. Perhaps some comment upon the ultimate artificiality of the virtual scenarios? or perhaps that this is one of the hero’s multiple reality incarnations?