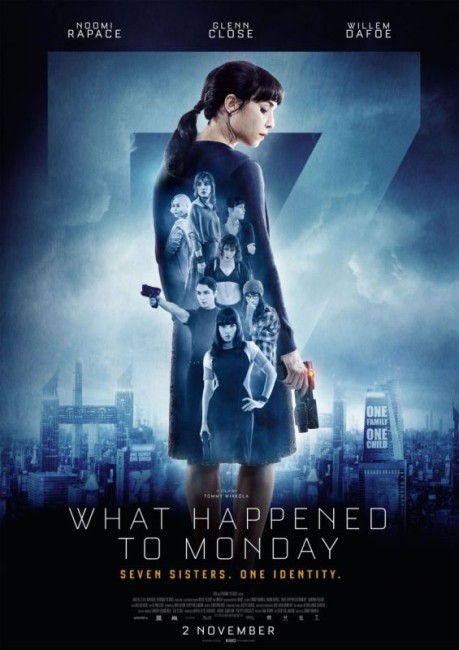 In the future, due to overpopulation, the governments of the world have instituted the Child Allocation Act, which mandate that families can only have one child. The Child Allocation Bureau has been instituted to enforce this with any extra children being placed into cryosleep to be reawakened at a point in the future when the population has sufficiently dropped. Among the genetic deformations, Terrence Settman fathers seven identical daughters. He names them each after a day of the week and shelters them from the CAB, allowing each to only go out on their respective day, posing as his late wife Karen Settman. Thirty years later, Terrence has passed away and the seven sisters still live in hiding in their apartment, posing as Karen and each only going out to their bank job on their appointed day of the week. They always keep a record of the day’s events so that the others know what has happened. Things are abruptly thrown awry one day when Monday fails to return home after work. Panicked, the others cautiously send one of their number out to find what has happened. However, CAB has gained wind of their existence and now sends security forces after them.

What Happened to Monday was the sixth film for Norwegian director Tommy Wirkola. Wirkola first appeared with Kill Buljo: The Movie (2007), a low-budget splatter-heavy parody of Quentin Tarantino’s Kill Bill films and then had a midnight hit with the Nazi zombie film Dead Snow (2009). This led to the Hollywood-backed Hansel & Gretel: Witch Hunters (2013), as well as sequels to both his earlier films with Kill Buljo 2 (2013) and Dead Snow 2 (2014), as well as the horror comedy mockumentary Kurt Josef Wagle and the Legend of the Sea Witch (2010).

I can’t say I am much of a fan of Tommy Wirkola’s films – the Dead Snow films were clumsy horror comedies getting by on little more than splatter effects and genre in-jokes; Hansel and Gretel: Witch Hunters was brain dead. On the other hand, Dino De Laurentiis’s daughter Raffaella, esteemed actors like Willem Dafoe and Glenn Close, not to mention ten different European production companies seem to think Tommy Wirkola has something to offer and have backed him to the extent of a $20 million budget. (It should be pointed out in this case that Wirkola is simply a hired gun brought in as replacement director on someone else’s project).

What Happened to Monday is a science-fiction film, Tommy Wirkola’s first venture into the genre. The premise is a bit of a head-scratching one. The nearest you might compare it to is the tv series Orphan Black (2013-7), which features Tatiana Maslany playing some nine copies of herself, all of whom interact as distinctive central characters. There is also something that reminds of the Philip Jose Farmer book Dayworld (1985) and sequels, which were touted for a film adaptation at one point, and are set in a future where, due to overpopulation, each member of the populace can only remain awake for one day of the week.

The Romanian locations make for a passable lived-in future. The effects do a seamless job of allowing seven distinctive versions of Noomi Rapace to interact with one another. The film should in theory have been interesting – only it isn’t. One part of it is a premise that fails to sit as being plausible. Twins you can accept but the idea of seven identical twin sisters stretches your suspension of disbelief a huge way. Firstly, you have to understand that the birth of septuplets is so rare that have only been two circumstances ever in recorded history. So the entire premise of the film is based on an occurrence where the odds are trillions to one. The film does some muttering about genetic mutations so you can sort of give it a pass on that one.

However, it soon becomes apparent that this freak circumstance has been contrived so as to offer a novelty dramatic hook amid the dystopian future that the film has devised. Even then, in order to make the story work, the script has to stretch plausibility and have the sisters with a skill level at hacking information and surveillance systems that outstrips the powers of the security force sent to apprehend them.

One of the big implausibilities of the film is why the security forces seem so constantly hobbled in their efforts to apprehend the sisters – the CAB know where the sisters are living so why don’t they just cut off their power, lock off access from their palm id chips, or else throw in a few tear gas canisters or kick the door down in overwhelming force like every SWAT team does when they bust a drug den. Glenn Close gives some line about not wanting to attract attention but, given that this is the security team only doing their mandated job, that seems only there to dramatically stretch out what is already an improbable scenario.

Even then, the film does little to make its set-up interesting. You get one or two twists on it at the end but it is a dystopian scenario that is only construed in terms of black-and-white villains and heroines fighting for their own survival rather than in terms of ideas. Like both Z.P.G. (Zero Population Growth) (1972) and Soylent Green (1973), the film gets all riled up about drastic measures taken to curb overpopulation and sides with ordinary people opposed to these strictures. In all of these cases, none of the films posits a solution that is anything other than having protagonists defying a harsh system. Not that one is advocating incinerating children but surely the end of the film that dismantles the one child rule and allows people to breed freely and consume resources with abandon once again is just a return to the future that the opening montage outlined in drastic terms.

Even aside from reducing its ideas to nothing much more than one-dimensional heroes against an evil dictatorship, all of this drags the film’s two hour running time out to is a series of tedious action sequences. The idea of playing seven different copies of oneself sounds like a meaty role that any actor/actress anybody would jump at. The film’s failing is that, unlike Orphan Black, Tommy Wirkola and Noomi Rapace never do enough to make the seven sisters distinctive enough from each other as characters. Several of the sisters are killed throughout but so little has gone into making them stand out as characters that you sit there thinking “Now which sister was that meant to be?” The end of the film hinges on a betrayal by one of the sisters but this feels entirely like a plotting switch that comes out of the blue, not one that emerges out of any of the inherent character tensions established throughout the film.