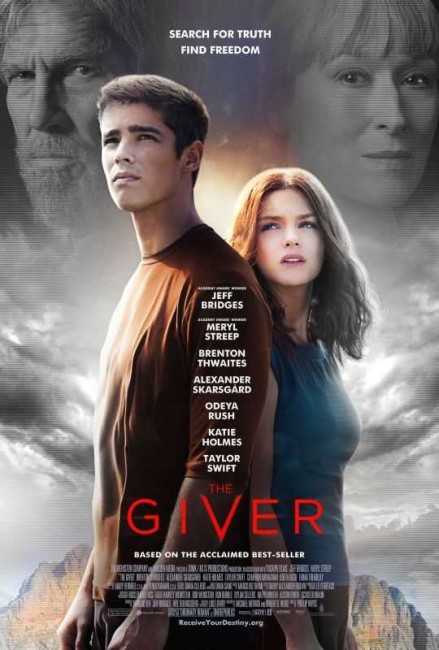 In the future, the populace have agreed to create a stable society where everybody is the same. By their code, no one may lie, unambiguous language is banned, clothing and architecture are uniform, and emotions are suppressed by drugs. It is the time of The Ceremony where youths are selected for the roles they are to perform in life. Jonas is the last to be selected and is given the rare position of Receiver. He meets the aging man known as The Giver and learns that he is to be the living inheritor of memories from before the world used to be the same. As The Giver, he is not required to live by the rules everybody else does, including having the right to lie. Absorbing memories from the touch of The Giver’s hands, Jonas begins to experience new emotions and is able to see colour for the first time. He becomes giddy with these new experiences, wanting to introduce them to Fiona, the girl he likes. However, these also attract the attention of the Chief Elder who regards him as a threat. The Giver also introduces him to memories of pain and suffering. Armed with this new knowledge, Jonas determines to defy the rules of the society and reintroduce everybody to emotions again.

The Giver (1993) is a classic novel by Lois Lowry. A work of Young Adult literature, it works essentially as a dialogue in which the young twelve year-old Jonas talks to the aging man known as The Giver and receives memories that slowly awaken in him an understanding of the past that has been erased from the socially-engineered perfect society he lives in. In his growing awareness, Jonas learns about things like music, art, emotion and suffering and eventually rebels against the society. The book received several prizes for Young Adult literature and has become studied in schools, although is also a work that conservative parental groups have challenged. Lois Lowry has written four follow-ups set in the same future with Gathering Blue (2000), Messenger (2004) and Son (2012).

Following the success of The Hunger Games (2012), the Young Adult dystopian multi-book series is all the in thing this year. Filmmakers everywhere are flocking to make their own Young Adult Dystopias before it goes out of fashion and we have seen the launch of Divergent (2014) to great success with sequels to follow and followed by The Maze Runner (2014). Here The Giver is flaunted as the next latest Young Adult Dystopian work, although the fairly indifferent box-office reception surely means that it is unlikely to continue as a franchise.

The Giver is apparently a project that Jeff Bridges personally shepherded in for many years and he acts as a producer on the final film. The film comes from Australian director Philip Noyce who emerged in the 1970s and gained a solid footing on the international stage with the psycho-thriller Dead Calm (1989). Noyce has steadily worked away as a mainstream director with films that vary between the reasonable and unremarkable such as Blind Fury (1989), Patriot Games (1992), Sliver (1993), Clear and Present Danger (1994), The Saint (1997), The Bone Collector (1999) and Salt (2010), as well as more personal works such as The Quiet American (2002) and Rabbit Proof Fence (2002).

I am at somewhat of a disadvantage not having read the Lois Lowry novel. From what I am able to gather from those who have read the book, the film waters down a story that is essentially a conversation between an old man and a boy, bumps the boy’s age up until he is in his teens, adds a romance and a clearcut villain, and substitutes a conceptual awakening for standard dystopian tropes.

The film settles in with what feels like a host of familiar tropes from the dystopian genre – the society where emotions are suppressed or else drugged a la George Orwell’s Nineteen Eighty-Four (1949) and films such as THX 1138 (1971) and Equilibrium (2002); the discovery of forbidden knowledge – almost any dystopian work; the hero gone rogue who becomes hunted by his best friend – Logan’s Run (1976); the society where everybody slots into pre-chosen lifetime job assignments – City of Ember (2008), Divergent and especially Aldous Huxley’s Brave New World (1932); the hero who ventures into the forbidden realm beyond the hermetically-sealed utopia – Logan’s Run, THX 1138; the rebel in the world where everybody is forced to adopt an identical sameness – Nineteen Eighty-Four, THX 1138, Gattaca (1997).

The Giver starts out seeming promising. Philip Noyce chooses an interesting way of depicting the slow awakening of Brenton Thwaites’s senses by showing the world in black-and-white where occasionally flashes of colour start to show, gradually opening out into full colour by the time he becomes emotionally freed. Here The Giver undeniably reminds of Pleasantville (1998), Gary Ross’s allegory about characters entering into a world of a 1950s black-and-white television show and gradually changing the way people think to open them up into colour.

Maybe if you want to think of The Giver as Divergent by way of Pleasantville – only a much better directed film than Divergent was, even if in the end Philip Noyce fails to make a terribly interesting out it. We are somewhat carried through the hero’s triumphs, struggle, emotional awakening and so on. But by now it all seems terribly generic and the film hits the cues without any genuine affect. For a film that is all about defying the need for everybody/everything to be the same, there is precious little that The Giver does to craft its own individuality and stand out from the sameness of the rest of the genre.