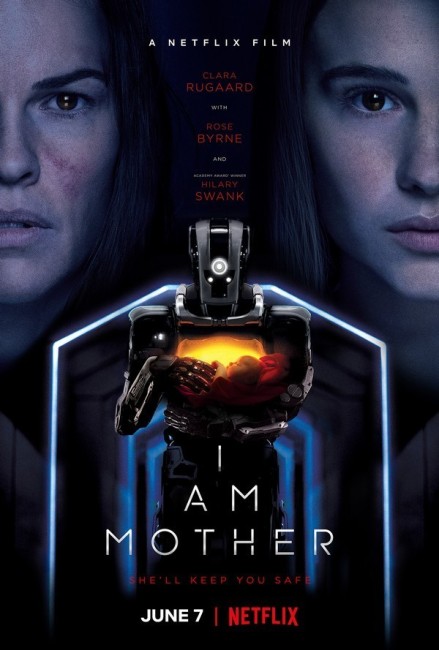 The earth’s surface has undergone an extinction level event. At the Unu Hwk Repopulation Facility, the robot Mother tends 63,000 human embryos that are kept in storage. Mother makes the decision to bring one of the embryos to life, producing a girl that she names Daughter. As she grows up into her teens, Daughter longs to go outside but is told by Mother that the surface is lethally infected. One day, Daughter hears another human outside and makes the decision to let the woman there into the airlock. She tries to hide the woman’s presence from Mother but Mother discovers her. Fearful of letting Mother anywhere near her, the woman tells Daughter of a very different truth to the one she knows – that the remaining humans on the surface are being hunted and killed by robots identical to Mother. Mother denies this. Daughter cannot believe Mother would do such a thing and tries to decide whose account she should believe.

I Am Mother was a directorial debut for Australian newcomer Grant Sputore who had previously only made a single short film. The screenplay for the film sat on the Hollywood Black List. Sputore was able to attract a sufficient budget to bring in well-known name stars like Hilary Swank and fellow Australian Rose Byrne (who voices the role of Mother), as well as afford the facilities of the Weta Workshop for the design of the robot. The film premiered at Sundance, played at several film festivals and then became a word of mouth hit on Netflix.

The fallout shelter drama has a certain lineage in science-fiction cinema. There have been efforts such as The Divide (2011), which brutally depicted the collapse of social cohesion among a group of survivors in a shelter in the aftermath of a nuclear war. I Am Mother comes the closest to the likes of Air (2015), Hidden (2015), 10 Cloverfield Lane (2016) and It Comes At Night (2017) that feature survivors in shelters uncertain about what may or may not await them on the surface. There was also the Crypt (1977) episode of tv’s Logan’s Run in which we had a shelter of six cryogenically sleepers chosen to rebuild the world before the discovery that one among their number was a murderer. You could even include here Chosen Survivors (1974) with a group in a shelter being attacked by vampire bats.

I Am Mother does similar things to works like Air and 10 Cloverfield Lane. Once Hilary Swank enters the show about thirty minutes in, the film becomes a game of doubts as to who Clara Rugaard can believe – the caring robotic mother who raised her or else stranger Hilary Swank who claims that the robots have been progressively eliminating humanity on the surface. This the film plays out with quite a reasonable degree of tension and doubt on either side. The complaint might be that the film keeps hinting and suggesting a big revelation about what is happening but the end arrived at is nothing too surprising – merely the confirmation of which of the two sides is right.

What makes the film stand out though is the robot. The filmmakers have attained some exemplary work from the Weta Workshop in the design. What gives the film something unique are its opening scenes where we see Mother tending the facility, hatching the embryo and raising the child. It is a montage sequence filled with beautiful and tender images of the robot holding the baby to its chest, feeding the infant and then painting, holding hands with and hugging the child as she grows up. It is these opening moments that makes I Am Mother something that one immediately pays attention to.