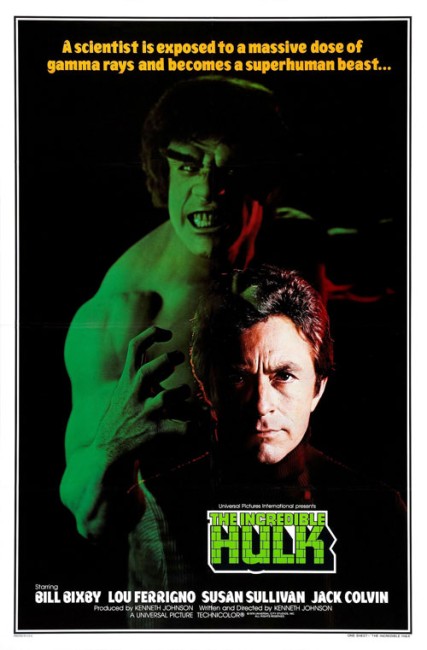 Scientist David Banner is haunted by the death of his wife who burned to death in a car accident because he was not able to summon the strength to get the door open. He is conducting research to find why some people have adrenalin rushes that allow them to lift entire cars in similar circumstances. He finds that such people have a common type of DNA, something that he also possesses. He wonders why he could still not find the strength to save his wife and then realizes that solar flares were particularly strong on the days that each of the other subjects experienced their bursts of strength. He subjects himself to a high dose of gamma radiation in the laboratory, although to no effect. Later however, when Banner has a flat tire and experiences a flare of anger, he transforms into a huge, muscular green-skinned creature that smashes the car up. He discovers that he accidentally gave himself a very high dose of gamma radiation and that this causes the hulk to emerge whenever he gets angry. However, when the hulk tears up the lab and kills his assistant, David is forced to go on the run, carrying the secret of the hulk inside him.

The Incredible Hulk was the most successful of a series of Marvel Comics adaptations that were sold in a package to tv in the late 1970s. First to emerge was the dreary short-lived The Amazing Spiderman (1977-9) series – see the cinematically released pilot Spider-Man (1977) for details. There was one tv pilot of Dr. Strange (1978) and two Captain America pilots, Captain America (1979) and Captain America II (1979) but these failed to go to series. A planned version of Sub-Mariner was axed because of the recent flop of the tv series The Man from Atlantis (1976-7), while a version of The Human Torch was canned because of network fears that it might inspire kids to set fire to themselves.

Created by Stan Lee and Jack Kirby, the character of the Incredible Hulk first appeared in a six-episode comic-book run The Incredible Hulk in 1962, although this was not a success. The Hulk then guest-starred in various other Marvel titles, before eventually earning his own long-running comic-book line in 1968. The comic also saw spinoffs such as The She-Hulk, beginning in 1980. Certain changes were mandated for the comic’s adaptation as a tv series – Bruce Banner was renamed David (apparently because some network executive thought Bruce was not an heroic enough name – Bruce Willis was then of course a total unknown); while the Hulk goes from grey to green skin and loses the ability to talk, becoming merely a hulking mindless brute. All of the super-villains and alien threats that the Hulk regularly encountered in the comic-book were reduced to mundane ordinary people dramas.

The Incredible Hulk tv series lasted for four seasons between 1977 and 1981. This was the pilot episode. The subsequent series reduced the comic-book to a simplistic formula, no more than a variation on The Fugitive (1963-7) with Bill Bixby drifting from one place to the next each week, somehow managing to get a job despite his lack of identity papers (the series by implication seemed to promote the view that all employers pay workers under the table) and invariably stumbling into a situation where the Hulk would emerge through some trivially contrived trigger incident and go on a rampage. The Hulk would shred Bill Bixby’s wardrobe (all with the exception of his pants) and everything would be put right again by the end and Bixby would continue on, without ever feeling the need to undergo anger management therapy. It was an incredibly banal and insipid tv series.

The pilot is the only episode of the series worth watching. Here for about the only time you see the Hulk as a mindlessly rampaging force of anger and Banner having to deal with the consequences of its actions. The subsequent series only ever turned the Hulk into a plot deus ex machina – it was supposed to be a force of anger but it managed to be a benevolent one, its rampages conveniently occurring whenever Banner needed to get out of a tricky predicament or save someone. Though the Dr Jekyll/Mr Hyde nature of the character was unique, David Banner ended up being a variant on the wandering do-gooder hero that inhabits much fantastique tv.

The pilot was directed by Kenneth Johnson, a producer who had previously worked on the superheroic tv series The Six Million Dollar Man (1973-8) and created The Bionic Woman (1976-9) and would go onto other genre tv series such as V (1983) and Alien Nation (1989-90) and later cinematically direct the nauseating Short Circuit 2 (1988) and another comic-book superhero adaptation with Steel (1997).

Having seen a number of episodes of the annoyingly insipid series beforehand, the pilot comes as a surprise. Kenneth Johnson invests a reasonable degree of atmosphere into the story. The initial appearance of the Hulk in the rain, smashing up Banner’s car and throwing it down a hillside, contains a certain primal ferocity. Even better are the scenes of the Hulk tearing an entire pressure chamber apart. Balanced out against this is a degree of tenderness – the script does make the point that the Hulk is only an expression of Banner’s unconscious and would not do what he himself would not. The scenes of it in the woods coming upon the little girl and the father’s subsequent attack upon it consciously evoke memories of the Boris Karloff Frankenstein (1931). There is also a very nice shot of the Hulk transforming back into Bill Bixby seen reflected in a pool of water.

The pilot was later edited together with the episode 747 and released theatrically outside the USA as The Incredible Hulk (1979). Why the other episode was added is anybody’s guess, as the pilot on its own is a perfectly good film. Certainly, the first half-hour with Bill Bixby and Susan Sullivan trying to work out the secret of adrenalin bursts is tedious going and in the theatrical release this is cut out altogether and the film jumps right into the laboratory experiment. 747 has Bill Bixby travelling aboard a plane to meet a scientist who offers a potential cure, only to run into a hijack attempt by the cabin crew in order to steal Ancient Egyptian antiquities, ending with Banner having to land the plane. It would have been harder to come up with an episode worse chosen to complement the pilot and it often verges on the laughable in the scenes with the green-skinned Hulk trying to fly an airliner.

The series second pilot Death in the Family was later reedited as a tv movie Bride of the Incredible Hulk (1978). Although this has no known cinematic release, it appeared under the latter title in dvd release in recent years. Following the demise of the series, the character of the Hulk was later revived in three tv movies – The Incredible Hulk Returns (1988), The Trial of the Incredible Hulk (1989) and The Death of the Incredible Hulk (1990). The first two of these have the novelty of introducing other Marvel Comics characters, respectively Thor and Daredevil, to the screen. The last was directed by Bill Bixby and kills David Banner off (ironically Bixby himself died not long after). Ang Lee’s Hulk (2003) was a big screen revival of the comic-book with Eric Bana as Banner and this was followed by The Incredible Hulk (2008) with Edward Norton in the role, while the Hulk also appeared in the Marvel Comics superheroes team-up The Avengers (2012), Avengers: Age of Ultron (2015), Thor: Ragnarok (2017), Avengers: Infinity War (2018) and Avengers: Endgame (2019) played by Mark Ruffalo, all of which incarnate the Hulk in giant CGI form. Marvel has also spun a series of animated films of from their superhero titles, which include Hulk Vs (2009), Planet Hulk (2010) and Hulk: Where Monsters Dwell (2016), while the Hulk also appears as a member of The Avengers in Ultimate Avengers (2006) and Ultimate Avengers II (2006) and we meet an aging Hulk in Next Avengers: Heroes of Tomorrow (2008).