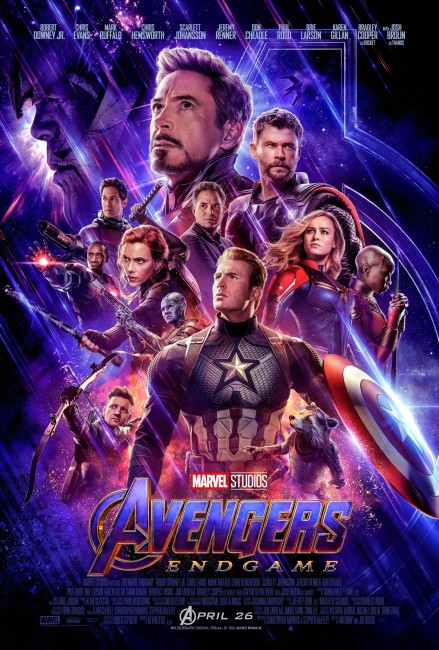 In the aftermath of Thanos’s activating of the Infinity Stones and using them to obliterate half the population of the universe, the remaining Avengers track Thanos down on a remote planet. There he reveals that he used the Stones to destroy the Stones before Thor kills him. Seeing no hope of restoring the populace, The Avengers slump into a resigned acceptance of the situation. Five years later, many of them have settled down with Tony Stark having had a daughter with Pepper Potts. Scott Lang suddenly re-emerges from the quantum realm where only five hours have passed for him. He comes to The Avengers trying to convince them that the quantum realm offers possibilities for time travel and that they could go back to before Thanos snapped his fingers. Tony Stark at first rejects the idea as impossible but then runs tests and finds a configuration that works. This allows them to build a series of suits that can travel back in time. The remaining Avengers are reunited for an ambitious plan to travel back to the various zones where the Stones were located, obtain them before Thanos does and then use them to restore the populace in the present. However, things are thrown awry when Nebula’s journey back to the planet Morag activates the cybernetic network of her counterpart in the same timezone and Thanos is able to access it to view the records of their plan.

Ever since Samuel L. Jackson’s cameo at the end of Iron Man, Marvel have been building their characters together into a grand unified universe. This, which was subsequently named the Marvel Cinematic Universe, first merged together in The Avengers film. Ever since then Marvel has been to trying to build more and more on top of that – as with the recent Captain Marvel, that has even involved going back in time and retconning events so as to fit more backstories into the grand scheme. By the time that Avengers: Endgame arrives on screen, it is bigger than big, packed with more cameos of people who have appeared throughout the history of the MCU than it seems possible to easily enumerate, Indeed, looking at massive character line-up in the above cast-list, it should be noted that many of them have only one or two lines. In the cases of Nick Fury, Jane Foster and Peggy Carter, their appearances are limited to merely their presence in a couple of scenes with no actual lines spoken.

In this regard, a major disappointment is Captain Marvel who was built up at the end of Infinity War and especially in the post-credits scene of Captain Marvel as the last hope for the universe. After all that, she only gets to appear briefly at the start to affect a rescue but is then sidelined for most of the show, making occasional minor appearances (with the addition of a new highly unbecoming haircut) and then turns back up as part of the big end battle. After such a big build-up, it is a letdown to see her shuffled aside as just another character in the overspilling ensemble of characters on screen.

In contrast to Infinity War, Avengers: Endgame is slower in pace. Where Infinity War was wall-to-wall superheroic action scenes without let-up, Endgame slows right down – fully the first hour of the show takes place without any superheroics. During these scenes, it is character-driven, even introspective and pessimistic, which comes in considerable contrast to almost any other Marvel film, let alone one directed by the Russo Brothers. Indeed, apart from a few brief scuffles at various points throughout, it is only the major climactic punch-up where the film actually gets its act together to approach the same big action scenes that Infinity War offered.

In some of these scenes, you get the feel that the Russo Brothers are trying to go for the same character humour that Joss Whedon delivered in his two Avengers entries but most of these come out as awkward – silly scenes with Ant-Man and Hulk competing over posing for selfies with fans; most of the scenes with an overweight Thor; and a slightly more amusing one at the end with Thor and Peter Quill contending for who is in charge of the ship.

This does bring us to the plot. The idea of introducing time travel to get out of a seemingly intractable dead end is workable. The talk of time travel via the quantum plane is no more than science-fictional handwave science that doesn’t bear a moment’s serious scrutiny. The script kind of critic proofs itself by namedropping other time travel films – Time After Time (1979), Somewhere in Time (1980), The Terminator (1984), Bill and Ted’s Excellent Adventure (1989), Timecop (1994), Hot Tub Time Machine (2010), and especially Back to the Future (1985) – even throwing in lines like “You mean Back to the Future’s a bunch of bullshit?”

The problem with this is that despite quoting a bunch of other classic time travel films, Avengers: Endgame fails to hold a candle to any of them. For all its stating that Back to the Future is a bunch of bullshit, it seems happy to borrow from that series, in particular from Back to the Future Part II (1989) and the way it staged events around the margins of the original. Here much of the middle of the film involves the team travelling back and having adventures around the edges of happenings of The Avengers, Thor: The Dark World (2013), Captain America: The Winter Soldier (2014) and Guardians of the Galaxy. However, there is no particular cleverness to any of this. The most imaginative the Russo Brothers get is having two versions of Captain America facing off against one another in one scene. At another point, Tony Stark meets his father (John Slattery) who is excited about the fact his wife is pregnant with Tony – but Tony Stark is too cocky and sarcastic a character to seem convincing when he gets all emotional about reconciling with his father.

The cleverest use of the time travel themes is where Nebula travels back and her proximity activates the network of her past counterpart allowing Thanos to play her memories back and gain access to The Avengers’ plans, even foreknowledge of his own death. On the other hand, the film misses the opportunity to do anything clever with this. All that it becomes is the opportunity for a massive punch-up between The Avengers and Thanos and his army.

This is part of the problem with the Russo Brothers’ way of directing films where they are constantly cutting back and forward between concurrent pieces of action. They are never plot driven films – although the first hour of Endgame gives some hope in this direction, surprisingly little happens. The crucial thing in watching the big battle is that you end up losing track of when it is meant to be taking place – past or present – and are suddenly surprised by the appearance of vast amounts of other Avengers out of nowhere before you realise that the unsnapping having clearly taken place off screen. Certainly, the Russo Brothers mount the show to an epic-scaled climax with just about every Marvel superhero and character in existence coming together to defeat Thanos – at times, the sequence ends up reminding of the Battle Royale that Steven Spielberg staged in Ready Player One (2018).

However, this does leave a major hole in the time travel logic. If the big battle takes place on Morag shortly before Thanos obtains the Infinity Stone and ends with The Avengers eliminating Thanos, then this surely erases Thanos and the events of Infinity War from the timeline ie. with Thanos dead, he is no longer able to snap his fingers. That also means that The Avengers have just erased the timeline they came from in which half the populace of the universe is destroyed. That would also mean that there would be no future in which Tony Stark has a child left for them to return to as we see happen at the end. Not to mention that this would leave a universe where there are now two versions of each of The Avengers running around. While the script gets a laugh out of dismissing Back to the Future as bullshit, you cannot help but feel that it is failing to notice the massive logic hole it creates in its own script.

Which does bring one to the aftermath of the battle. This ends up two members of The Avengers dead, another deciding to retire, another an old man and the latter two handing their icons of power over to others. Indeed, of the original six members that appeared in the first Avengers film in 2012, only two of them still remain. While the characters have had careers that last for decades on the comic-book page – in the case of Captain America, he has been around since the 1940s – it is a surprise to see them being retired after just over a decade on screen. (In all cases, these are fates that are different to the ones that the characters have on the comic-book page where all are still going strong). Among the films that Marvel has announced in the future, there are no plans for any further Avengers film. Not to say that there is no possibility of the various characters being revived – the comic-book genre is notorious for casually killing off characters and then later reviving them – and given that there is a Black Widow standalone film slated for 2020, it is likely that she will be revived in some way. Not to mention with Avengers: Endgame now being the biggest box-office film of all time, it would be commercial suicide for Marvel/Disney not to make more.

Part of the problem here is simply actors that age in real world terms – a 54 year-old Robert Downey Jr is notedly showing his age this time around – whereas comic-books can keep actors around the same age for decades (Superman, for instance, has appeared in his mid-thirties since the actual 1930s). More so than that is the issue of the stars’ contracts where it would appear in many cases that the number of films they were slated to appear in has reached an end, As was the case with 20th Century Fox’s X-Men films, the series became a victim of their own success in that the massive popularity of the films boosted the stars’ profiles and put their asking price out of the range of an ensemble film. 20th Century Fox dealt with this by creating a series of prequels but in that Marvel is so tied to a threaded continuity this well prove difficult – given that the series depicts the formation of The Avengers, this seems to preclude the possibility of being able to go back and do The Young Avengers. Nor does one see an easy ability to recast the parts with different actors. It may well be that in the era of the massive Marvel continuity build up that we have just watched the biggest line-up of their heroes they can pack together on screen and that after this all that is left are team-ups between C-listers.