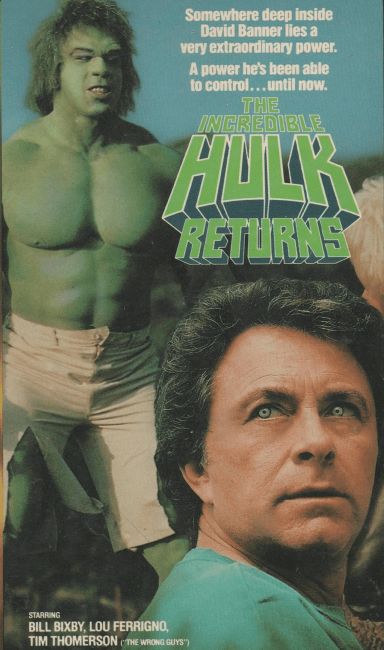 Hiding under the name David Banyon, David Banner is now working for the Joshua Lambert Institute in California where he has nearly finished building the Gamma Transponder, which promises great scientific advances. He has also become involved with co-worker Maggie Shaw. He has been free from transformation into The Hulk for two years and is hoping that the Gamma Transponder will rid him of The Hulk forever. However, he is discovered by Donald Blake who attended one of his lectures years ago. Donald insists on telling David the incredible story of what happened when he stumbled into a cave while mountaineering. Inside, he found a tomb that contained a Viking hammer that was able to call the Norse god Thor back to life. When David proves sceptical about the story, Donald produces the hammer and calls up Thor. This immediately triggers The Hulk in David. It fights with Thor, during which the laboratory is wrecked. The incident attracts the attention of Jack McGee who comes snooping. As David and Donald join forces to repair the damage and deal with their mutual counterparts, a Cajun gang determines to steal the Transponder.

Way back before Marvel Comics took over our movie screens, there was another whole generation of Marvel adaptations. During the late 1970s, a package of Marvel properties appeared as tv series – the dreary short-lived The Amazing Spiderman (1977-9) series – see the cinematically released pilot Spider-Man (1977) for details – as well as tv pilots of Dr. Strange (1978) and Captain America (1979) and its sequel Captain America II (1979) that failed to go to series.

The most successful of these was the tv series version of The Incredible Hulk (1977-81) starring Bill Bixby (where the hero was renamed David Banner apparently because some executive decided that Bruce wasn’t manly enough) and with body-builder Lou Ferrigno playing the transformed Hulk. The series was incredibly banal, shrinking all of the comic-book elements until we had no more than a variation on tv’s The Fugitive (1963-7) with Bill Bixby as a roving do-gooder who each week would wander into a situation and help some soul in distress while trying to deal with The Hulk who inevitably emerged and went on a rampage. The pilot episode was released cinematically as The Incredible Hulk (1977).

Way before the Marvel Cinematic Universe became the biggest thing since sliced bread, it was all done before by Marvel here. It is hard to know if this was just a dry run for an idea that was percolating in Stan Lee’s head about what he could do if someone would give the films the budgets they deserved or else it was Marvel having fun with their universe and trying to piggyback others characters in on a popular hit to see if they would take off. Whatever the case, these films – The Incredible Hulk Returns and The Trial of the Incredible Hulk – saw the first screen incarnations of respectively Thor and Daredevil. What we also had was the first ever live-action attempt at a Marvel crossover – although this had occurred before in animation with some of the Marvel animated series of the 1960s and 70s.

The odd thing about the incarnation of Thor here is that Eric Kramer’s casting, which is usually ridiculed, is far closer to The Mighty Thor of comic-books than we received in the Marvel Cinematic Universe incarnation with Chris Hemsworth in Thor (2011), Thor: The Dark World (2013), Thor: Ragnarok (2017) and The Avengers films. We get an actual appearance of Donald Blake (played by Steve Levitt), whereas in the modern films Blake was nothing more than a spare set to clothes and an id badge given to Thor in Thor. The relationship between Donald and Thor is slightly different here than in the comic-book – there Blake would transform into Thor (not unakin to Shazam/Captain Marvel) after striking the hammer, whereas here Thor is a physically separate entity that Blake summons using the hammer. This Thor also wears a winged Viking helmet just as he does in the comic-book, something that was eliminated in the film versions as looking too silly.

On the other hand, The Incredible Hulk Returns is far less interesting whenever it starts acting as an Incredible Hulk film. I was never much of a fan of the tv series. Bill Bixby’s pained sincerity made for a bland hero. This was also the era of what I call mundane superheroics as seen in shows such as The Six Million Dollar Man (1973-8), The Amazing Spiderman and The Greatest American Hero (1981-3) – ones in which, despite having superpowers, the heroes were trimmed back to little more than 1-2 super-acts per week, which were usually denoted by people running and throwing things in slow-motion. Fairly much all fantastical elements and crucially any of the super-villains of the comic-book were written out in favour of standard crime drama plots.

Even when it comes to a more fantastical character like Thor here, any mention of Asgard and the complex mythology of the comic-book has been eliminated and the superheroics merely consist of Thor appearing and throwing hoods into the surf. The plot here seems contrived – once again, Banner has gotten a highly skilled job despite his lack of identity papers (and presumably references); Donald manages to track him down for no particular reason when a seasoned reporter like McGee has been unable to; hoodlums want to steal the transponder well because.

Eric Kramer is not particularly bad as Thor – certainly, not as much as the camp value reputation that The Incredible Hulk Returns has gained would have it. His greatest crime is that he tends to look like a Swedish bodybuilder and has none of the wry charm that Chris Hemsworth brought to the role. There are rumours that Thor was being considered for his own spinoff tv series, although it is hard to see how it would have worked (at least as presented here) – a big bodybuilder who magically appears and throws people around and his longsuffering nerd companion doesn’t seem to have the crucial spark to it. Most of it seems construed as odd couple and fish out of water humour At least the scenes with Thor spouting warrior speak and trying to adjust to normal human conveniences provide the film with some amusement and Kramer gets into the spirit of it, carrying the role with a gregarious vigour.