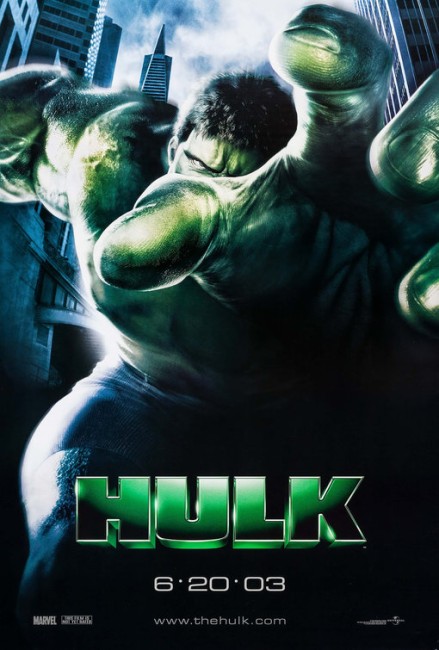 Scientist Bruce Krensler is researching to find a means of allowing soldiers to instantly regenerate when wounded on the battlefield. Bruce is then accidentally caught in the path of a high dosage of gamma radiation. This should normally kill a person but instead Bruce feels invigorated. While in hospital, he is contacted by a janitor from the lab who claims to be the father that Bruce never knew, who tells Bruce that his real name is Banner. Bruce now finds that whenever he starts to become angry, he turns into a giant-sized green-skinned monster that has enormous strength and is invulnerable to all damage. He realises that this is a result of a combination of the gamma radiation and genetic experiments that his father conducted on himself before Bruce was born. Caught between his human self and the uncontrollable hulk, Bruce is hunted by both the military who see him as a threat, commercial researchers who want the secrets of his DNA, and his crazed father who wants to complete the experiment he began in the 1960s.

Created by Stan Lee and Jack Kirby, the character of the Incredible Hulk first appeared in 1962 in a six-episode comic-book run The Incredible Hulk, although this was not a success and was killed off. (In the original version, The Hulk was grey and required a machine to affect the transformation every time he changed). However, The Hulk proved persistent as a character and regularly guest-starred in various other Marvel titles over the next few years, before eventually earning his own popular comic-book, which began in 1968 and still continues to this date.

The comic-book was first adapted to the screen with the tv series The Incredible Hulk (1977-81) starring Bill Bixby (where the hero was renamed David Banner) and with body-builder Lou Ferrigno playing the transformed Hulk. The series was an incredibly banal reduction of the comic-book, shrinking all of the super-villains and science-fiction elements until the concept was no more than a variation on tv’s The Fugitive (1963-7) with Bill Bixby as a roving do-gooder who each week would wander into a situation and help some soul in distress as The Hulk inevitably emerged and went on a rampage. The pilot episode was released cinematically as The Incredible Hulk (1977). After the demise of the series, there were three tv movies made – The Incredible Hulk Returns (1988), The Trial of the Incredible Hulk (1989) and The Death of the Incredible Hulk (1990) – the first two of which had the novelty of introducing other Marvel Comics characters, respectively The Mighty Thor and Daredevil, to the screen.

The surprise that came with Hulk was the announcement of Ang Lee as director. Ang Lee had just had an enormous international hit with the phenomenon that was Crouching Tiger, Hidden Dragon (2000). The surprise about the choice of Ang Lee as director is that Lee is an arthouse director, someone who seems artistically at odds with the nature of the big-budget blockbuster, let alone the pulp medium of the comic-book adaptation. The Taiwanese-born, American-naturalised Lee had first emerged with genteel Chinese-American culture clash comedies like The Wedding Banquet (1993) and Eat Drink Man Woman (1994) and then showed an exceptional versatility, moving from the Jane Austen adaptation Sense and Sensibility (1995) to the 1970s excavation The Ice Storm (1997), the Civil War drama Ride with the Devil (1999) and finally his native Chinese Wu Xia balletics with Crouching Tiger, where he reinvented the genre with an extraordinary visual poetry and a lushly romantic storyline that wowed audiences worldwide. Hulk was followed by the subsequent hugely acclaimed gay cowboy love story Brokeback Mountain (2005) and other award-winning works like the quasi-fantastical Life of Pi (2012), Billy Lynn’s Long Halftime Walk (2016) and a return to the science-fiction genre with the action film Gemini Man (2019) in which assassin Will Smith faces off against a younger clone of himself.. Hulk was Ang Lee’s first American studio film.

Usually the idea of an arthouse director dabbling in mainstream blockbuster material has the feel of condescension to the genre, excepting for the fact that Ang Lee has an amazing versatility at being able to hop genres and seem perfectly at home in almost any period setting. There is the sense some of the time here that Ang Lee is merely a hired gun guiding a big juggernaut through its motions. Nevertheless, Lee does make his own imprint, even if Hulk will probably never stand as his great masterpiece.

Ang Lee adds much in the way of backstory to the Hulk’s origin – the first third of Hulk consists of a great many flashbacks to both Bruce and Betty’s childhoods. Bruce gets an entire psychological backstory about his father’s genetic enhancements and his repressed angers over and above the mere gamma radiation lab accident origin story used in both the comic and the tv series. Hulk was slammed by some critics for attempting to add an overly Freudian weight of baggage to the story. This seems frivolous fault-finding and in truth it is just the standard dark and moody psychological motivation for the superhero that has crept into filmed comic book adaptations since Batman (1989). Certainly, none of the characterisation here is particularly deep – the script trades in stock characters such as the hard-headed military general, the slimy corporate suit, the cliché love interest – and is fairly much by-the-numbers as comic-book adaptations go.

While most modern comic-book adaptations go to great lengths to set things superheroic inside a realistic milieu, Ang Lee contrarily goes the opposite way and attempts to make Hulk literally resemble a comic-book. He adopts a unique method of styling the very look of the film as though it were a comic-book, with the screen splitting up into frames and panels, and a series of wipes and morphs between the background of one scene and the next. The artistic merit of this seems dubious – it seems self-conscious, a gimmick that might work fine for an MTV clip, but seems more distracting when applied to a story and at feature-length. Moreover, both the self-consciously styled visuals and the constant dives between flashback and even down into animated genetic material bubbling away tends to constrict and make somewhat murky what is otherwise a straight-forward superhero origin story.

It is not until the film gets the origin story out of the way that Hulk starts to open up and become fun. The one advantage of the big-budget, big-screen adaptation treatment is that it has far greater freedom to be a comic-book and engage in the superheroic, something that the tv series seemed afraid of doing. There is a good deal of fun to be had when Ang Lee unleashes the full-on superheroics with the Hulk throwing around and tearing apart tanks, jumping onto helicopters and wrestling them to the ground, biting the heads off missiles, making graceful 1000-foot leaps through the air across the desert and flying up into the stratosphere while grasping the back of a jet fighter. Lee even manages to arrange a super-villain for a classic superpowered showdown at the climax.

On the minus side, the thing Hulk had going against it, something that caused studio executives to panic when previews were seen over Superbowl weekend, is that the giant-sized Hulk looks exactly like it is – a great big green cartoon figure. While the effects shots are often clever, the film cannot quite transcend the artificiality of its title character’s presence. In comparison to say the utterly captivating suspension of disbelief we saw in the conception of the entirely CGI-created Gollum in The Lord of the Rings: The Two Towers (2002) a few months earlier, the results are a disappointment.

Amid the cast, Eric Bana and Jennifer Connelly give competent performances in by-the-numbers roles of no particular distinction, while all the real acting is left to the barnstorming veterans of the cast – Sam Elliott and Nick Nolte, who both rise to the occasion with flair.