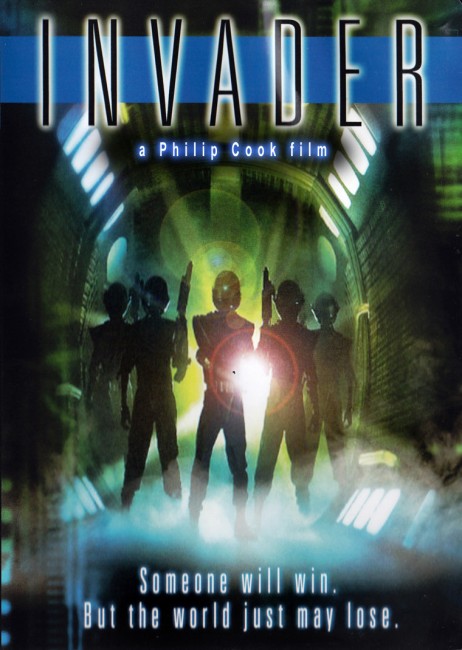 1986. Frank McCall, a tabloid journalist for the National Scandal, is sent to Clarksburg, Virginia to obtain photos of several soldiers who have been killed. McCall becomes intrigued by the happenings on the nearby Air Force Base. He sneaks onto the base to witness a demonstration of the new F-23 stealth fighter that is powered by the A.I. known as ASMODS (Automated System Managing Offence and Defence Strategies), only to see the computer go amok and cause the plane to crash. McCall is then forcibly dragged away by soldiers who attempt to place him into a brain induction machine. Department of Defence agent Harry Anders bursts in to rescue McCall at gunpoint. They are then hunted by soldiers whose minds have been taken over, as well as a UFO. Escaping to Washington D.C. in a stolen stealth fighter, McCall and Anders try to tell the higher-ups what happened but encounter difficulty having their story taken seriously. Realising that ASMODS has been built with technology taken from a crashed alien ship, they try to stop the A.I. as it starts taking over the entire US military network with the intention of starting a war that will eliminate all the US’s enemies.

Invader is a completely (and justifiably) ignored low-budget science-fiction film. Director Philip J. Cook has made two other low-budget science-fiction films with Beyond the Rising Moon (1987) and Despiser (2003) and the tv series Malice (2012-3) and its various spinoffs, which are also equally ignored. There are no names on the credits that one recognises from anywhere else – the sole exception being that Invader is a co-production from 21st Century Film Corporation, the company set up by Menahem Golan of Golan-Globus fame after the collapse of Golan-Globus in 1989. 21st Century Corporation made a handful of films, including Captain America (1990), Death Wish V: The Face of Death (1994), several B-budget action films, and the remakes of The Phantom of the Opera (1989) and Night of the Living Dead (1990). The most famous property that 21st Century Film Corporation had on their hands during this time was the one film they never made – the planned Albert Pyun version of Spider-Man.

Invader is a complete head-scratcher, chiefly in terms of trying to work out what is going or even what type of film it is that you are watching. Initially, we seem to be in some type of high-tech fighter plane plot a la Firefox (1982) or Blue Thunder (1983). The film keeps suggesting that this is crossbred with an Amok A.I. plot, perhaps akin to something along the lines of Stealth (2005) or the artificially intelligent helicopter plot of Identified Flying Object (1985). On the other hand, there is also a UFO buzzing about and various soldiers who seem to be operating either under mind-control or having been taken over by body snatchers, which, along with the title Invader, gives the impression of an alien invasion/alien body snatchers type plot. And then there is the A.I. having been given the unsubtle name of ASMODS, which leaves one wondering if we don’t have the thoroughly bizarre notion of a fighter plane that is possessed by The Devil!

The film is filled with laughable plotting – like the scenes where DOD agent A. Thomas Smith and tabloid journalist Hans Bachmann make an escape from the pursuing mind-controlled soldiers by stealing a stealth bomber and flying it to Washington D.C.. The end explanation involving the appropriation of UFO technology in the design of the defence computer A.I., which has then run amok, created a UFO and possessed the minds of soldiers, and is now spouting ultra-nationalistic speech as it prepares to declare war on the rest of the world, makes little sense. Not to mention other parts that strain credibility in a major way – like how a tabloid reporter manages to walk onto a military forensic site with no restriction and starts snapping pictures without anyone present raising eyebrows.

Philip J. Cook’s direction is bad on almost every level. His action scenes are devoid of any conviction. One scene where A. Thomas Smith bursts into rescue Hans Bachmann after he is captured holds a remarkable lack of credibility – Smith stands in open sight and fires his gun at the soldiers who all stand surrounding Bachmann; the soldiers all go down in the exchange of gunfire, yet remarkably neither of the good guys manage to be hit during the exchange.

Cook also conducts all the special effects himself. Most of these are sub-par – some very poor shots of the fighter plane doing a strafing run on the runway, a cheap-looking model UFO. There is also a giant alien robot that briefly turns up at the climax but only looks incredibly tatty. There is also an extremely tinny canned score. I thought Identified Flying Object was absurd but Invader may well take the award the most ridiculous plotting and action scenes in any Air Force action film ever made.

The film features some extremely amateurish performances in places. Robert Biedermann is hilarious as an investigating Department of Defense officer who plays every scene with a lollipop in his mouth as though such a weirdly overstated affectation is meant to equal characterisation. On the plus side, the two leads are not too bad. A. Thomas Smith plays with a convincing credibility that gives the material far more seriousness than it deserves. Also amusing is the performance from Hans Bachmann who goes through the entire film with an “ahh geez” expression on his face, protesting everything that happens with a disgruntled sarcastic backhand.

Though Invader was released in 1992 (and even appeared to have a theatrical release), various references within the film give the impression that it has been made earlier and sat on shelves for several years. There is the stated 1986 setting for one, while the seated generals make a comment about how “the Reds are going to crap” at the new fighter plane when the Soviet Union was a thing of the past by the time that the film was released in 1992. One of the more amusing aspects is the film’s pre-dating of the widespread prevalence of the internet and its outmoded description of various aspects – reference to the ‘datanet’ or the suggestion that they should pull the phone lines out to stop the A.I.’s infection from spreading.