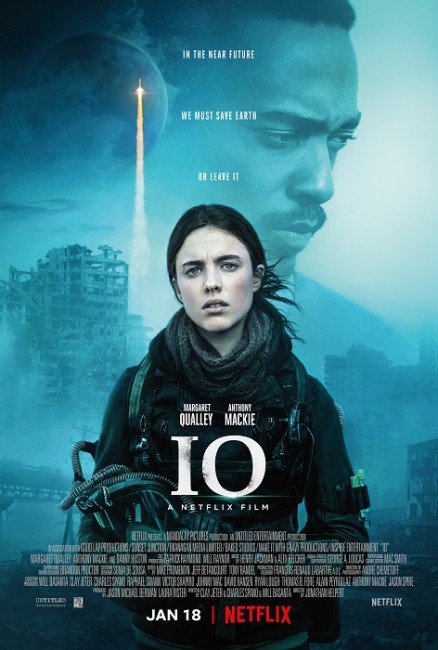 The Earth’s atmosphere has become poisonous due to climate change. Humanity has relocated en masse to Jupiter’s moon Io. Sam Walden is the daughter of scientist Henry Walden who argued against leaving Earth and held the radical idea that the climate situation was not as bad as it appears. Sam tends her father’s research station in a clean pocket of air on a mountainside. She maintains an email relationship with a guy on Io who urges her to join one of the last Exodus shuttles to leave Earth. Sam is jolted out of her reverie by the arrival by hot air balloon of Micah who needs to talk to her father. She allows Micah to stay and is reluctantly forced to admit that her father died and she has been maintaining things as though he still were there. Micah urges her to join him in travelling to board the shuttle. In so doing, the two connect with one another.

Io was the second film from director Jonathan Helpert. Helpert had previously made House of Time (2015) with an interesting sounding premise – of a man who claims to have uncovered a Nazi time machine – that makes me intrigued to check it out.

A few years ago, Io would have been an indie arthouse science-fiction film; today it is a Netflix release. Which I suppose says something positive about how Netflix’s domination of the marketplace is fostering smaller independent voices and allowing them the freedom to make individualistic works. (On the other hand, I have major gripes about the way in which Netflix is dismissive of older material).

The immediate disappointment that becomes apparent about Io is that despite taking the name of Jupiter’s moon as its title – I was hoping for maybe something in the neighbourhood of another Outland (1981) – it takes place entirely on Earth. Io is merely where the rest of humanity has relocated, although we do get one or two shots of the space station in orbit around Jupiter.

On the plus side, Io comes with an original and interesting concept. It is one of the first filmed ‘cli-fi’ (or climate fiction works) that takes place in an environmentally devastated future. Rather than the usual cliches of a destroyed Earth and the remnants of civilisation, if offers an original set-up in which Earth’s atmosphere has been depleted and Margaret Qualley must live on a mountainside, the only remaining area where there is sufficient oxygen left to breathe. The roads leading to the areas below where it is no longer safe to venture are even marked off with painted warnings.

All of that said, I feel that Io makes disappointing use of its premise. Despite creating an interesting scenario, all that Jonathan Helpert does is develop a relationship drama. The film has been stripped down to essentially play out with two actors – Andie McDowell’s daughter Margaret Qualley, whose name has been on the rise of recent, and Anthony Mackie in a role that stretches beyond MCU’s The Falcon – plus a handful of flashback scenes with Danny Huston as Margaret’s father. The story follows predictable arcs about Margaret inviting Anthony in, they connecting and eventually getting together. All of that said, the emotional connections never seem particularly deep, while the resolution of the show seems to come to an abrupt halt, followed by a positive upbeat ending that doesn’t feel earned.

The other issue I would raise about the film is the ending. [PLOT SPOILERS] Here Margaret Qualley makes the decision to take off her helmet down in the city … and after trepidation, discovers that she can breathe after all. It is supposed to be a big revelation but all it left me thinking was the film’s lack of grasp of basic scientific methodology. Would humanity have really made as drastic a move as to vacate the entire planet without someone leaving behind atmospheric measuring devices that could tell whether conditions have changed? Doing such involves existing technology we have today and that doesn’t even require a stretch of science-fiction. Would Margaret not have made some measurement of the atmosphere to show Anthony Mackie before taking off her helmet – it seems a high-risk manoeuvre based solely on a hunch? What it ends up with is almost a film that seems to advocate faith and pseudo-science – of having a belief in some certainty that goes against the grain of scientific orthodoxy and holding true to that despite all evidence indicating otherwise – which when you think about it is exactly the position of climate change deniers.