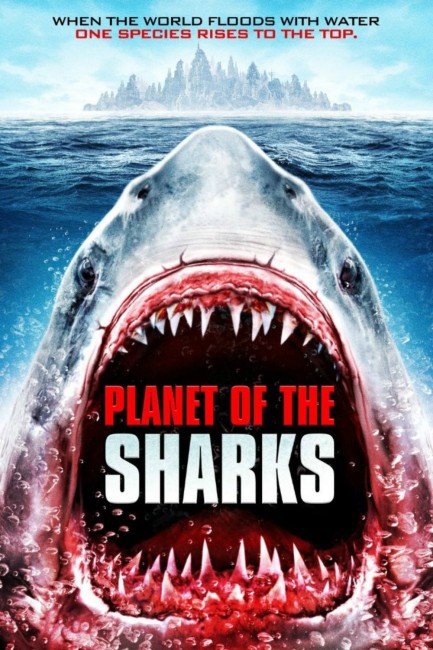 It is in the future after the polar ice caps have melted. The land mass of the world is underwater and the survivors live in ramshackle floating shantytowns. One of these shantytowns, Junk City, is now destroyed in an attack by a school of sharks. The residents of nearby Salvation try to work out what has happened. At the Vestron Oceanic Research Station, scientists under Dr Roy Shaw want to fire a missile that will set the C02 levels of the atmosphere back to normal. In heading to Salvation to trade for needed spare parts, they come up against attacking sharks. As they flee the destruction of Salvation, they realise that the sharks are being led by an alpha shark that controls the others via electromagnetic fields.

Planet of the Sharks joins Ice Sharks in being a move in a slightly different direction for The Asylum. Seemingly as though figuring they have gone about as far as it is possible to go with the gonzo killer shark film, they are now offering up titles that would normally be treated as absurd but are playing them seriously. (Not that some of Planet of the Sharks does not end up being ridiculous in its own way – more on that in a moment). By seriously one means in as far as most B movies sustain an inherent suspension of disbelief about what is happening on screen, as opposed to Sharknado and most of the abovelisted gonzo killer shark films that loudly signal that they are meant to be taken with tongue placed entirely in cheek.

Planet of the Sharks has essentially been conceived of as Waterworld (1995) with killer sharks. We get the same future scenario we had in Waterworld – the polar ice caps have melted and the whole world is beneath water with the survivors left clinging to ramshackle shantytowns on the surface. The crucial difference is that Waterworld was one of the most expensive films ever made at the time it came out, while Planet of the Sharks is made on a low budget. At which you have to say it at least does a fair and reasonable job of conveying the world of scavengers afloat on the ocean with penny-pinched resources.

Ever since Mega Shark vs Giant Octopus with its classic scene where a shark jumps out of the water to attack a plane, The Asylum has specialised in delivering wacky shark attack scenes – there is a variation on the scene here where a shark jumps out of the ocean to devour a microlite. Elsewhere, there are some adeptly handled scenes where sharks jump up through the bottoms of boats, and where two men are fighting bent over the side of a boat and a shark leaps out of the water to bite one man’s head off.

The film has a more ridiculous plot than most. One of these is that the writers seem to have inhaled a little too much in the way of conspiracy theory nonsense with the employment of HAARP (High Frequency Active Auroral Research Program) as a plot device. HAARP (now discontinued) was built by the US Air Force during the 1990s to excite the upper ionosphere in an effort to enhance communications technology. It has become a favourite of conspiracy theorists who believe it was built for weapons purpose and that it could variously manipulate the weather, trigger earthquakes and/or control people’s minds. In the film, it is now said to have the power to create earthquakes and tsunamis and suddenly right the environmental catastrophe by bringing the sunken landmasses to the surface, not to mention blast a beam from orbit that handily eliminates all of the sharks. The actual HAARP site is an array of radio transmitters built on a 40-acre site in Alaska; in the film, this has been condensed to a single rickety piece of machinery in a warehouse.

Empire of the Sharks (2017) was a semi-sequel also from director Mark Atkins and set in the same drowned future using the same sets.