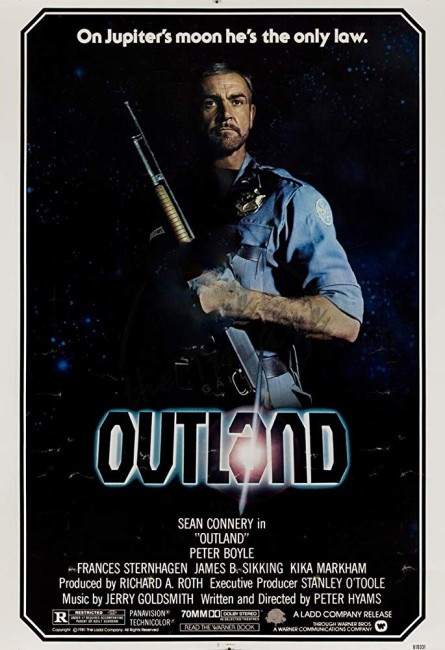 William O’Neil takes up position as the new security marshal on Con-Am 7, a mining station on Jupiter’s moon Io. O’Neil investigates a series of incidents where workers have gone crazy, killing people or walking out of airlocks without spacesuits. O’Neil’s investigation reveals the causes of such behaviour to be a drug pushed by the Company that increases work output but makes the brain burn out with long term usage. The Company attempt to buy him off and when O’Neil refuses they bring in two assassins to kill him. O’Neil is forced to run for his life through the station, an environment now made hostile by the refusal of any of the workers to stand up to help him.

Outland is one of trilogy of science-fiction films made by Peter Hyams in the post-Star Wars (1977) boom. Hyams subsequently quit science-fiction, although returned to the genre – less effectively – a decade later by which time he had become a much more commercial director. During this time, Hyams also made the wittily intelligent faked Mars landing thriller Capricorn One (1978) and the excellent and underrated 2010 (1984). (See below for Peter Hyam’s other genre films).

It has been customary to lambast Peter Hyams for his bad science – Harlan Ellison wrote an infamous review that is utterly damning of Outland. Although this is an aspect that has been overrated and in fact Peter Hyams’s trilogy should be noted for its uncommon degree of intelligence among the dearth of Star Wars clones that were being made around the time.

Invariably without fail, reviewers point out the similarity between Outland and the classic Western High Noon (1952), usually dismissing it with “High Moon” type reviews. To get it over with, yes, Outland does steal High Noon‘s basic plot of a sheriff in a small community taking a lone moral stand against a corrupt landowner. It often seems to be a conscious homage – like the station barroom that has swing doors.

However, the Western plot transfers to outer space surprisingly well. There are a few absurdities and scientific implausibilities – Outland is one of the most notorious films that promotes the scientifically absurd cliche that heads will explode as soon as they are exposed to a vacuum. In another scene, Sean Connery (seemingly still in James Bond mode) improbably manages to avoid a killer’s garrotte with a strip of plastic conveniently placed around his neck.

On the other hand, Peter Hyams creates a strong and effective portrait of a bustling and credible lunar colony and Philip Harrison’s rat’s kitchen of colony sets are impressively gritty and realistic. The special effects are good with some breathtaking vistas of Jupiter looming over the station as backdrop to the action.

Hyams conducts action well with some fine chase sequences through the constricted sets and out around the outside of the colony during the last twenty minutes of the film. Sean Connery’s wry sense of humour enlivens a film as always, and Frances Sternhagen’s gives worthwhile support as a grizzled, hard-drinking doctor.

Peter Hyams’s other genre films include:- Stay Tuned (1992), a comedy set in a Hell that is like a tv networks; the time travel/action film Timecop (1994); the monster movie The Relic (1997); the End Times action film End of Days (1999); and the Ray Bradbury adaptation A Sound of Thunder (2005). He has also produced the quirkily appealing Universal monster homage The Monster Squad (1987).