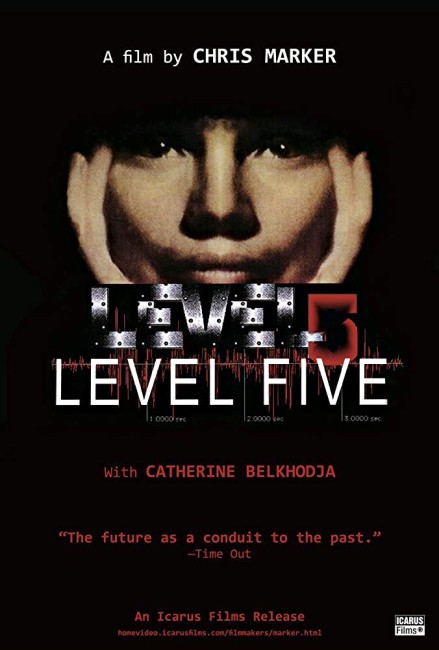 Laura is designing a computer game based on the Allied conquest of Japan in World War II. When it comes to the Battle of Okinawa, she attempts to edit it out as being of minor relevance but the computer refuses to ignore it. She searches the world net link OWL (Optional World Link) looking for survivors from Okinawa and comes to realise that Okinawa in fact decided the outcome of WWII. The Okinawans were conditioned to hating Westerners and were told that it was shameful to surrender to the enemy, meaning that when the invasion of the island came a third of the population committed suicide. The more she searches, the more Laura comes to realise that Okinawa was used by the Japanese government as a sacrificial pawn to teach a lesson to the Allies.

French director Chris Marker (born Christian Francois Bouche-Villeneuve) is best known for his famous short La Jetee (1962), which used melancholy French New Wave contemplations on time and memory to create a superbly haunting time paradox story. Marker has made numerous films between the 1950s and his death in 2012 but most of these remained unseen outside of France. All of these are also documentaries. A good deal of Chris Marker’s body of work is Marxist in nature – he having made films about the Cuban and Chilean revolutions and the likes of A Grin Without a Cat (1977/1993), a history of the Leftist movement since the 1960s, and The Last Bolshevik (1992) about a forgotten filmmaker of the Russian Revolution. A number of his films – The Kumiko Mystery (1965) and A.K. (1985), a documentary about director Akira Kurosawa, and including Level Five – have travelled to Japan to find their subjects.

Level Five is not only Chris Marker’s return to the science-fiction genre for the first time since La Jetee – an absence of 34 years, which must count as some sort of record – but also his first work of (quasi)-fiction during that time. However, Level Five is an incredible disappointment. When I saw Level Five it at a film festival, it was screened alongside a revival of the beautifully lyrical La Jetee. Seen next to each other, it is hard to believe the two films are by the same director. La Jetee is a science-fiction classic; by contrast, Level Five seems to have been made with little understanding of science-fiction.

I think I would have liked Level Five better if the film had come out and stood as a straight documentary. About half of it consists of Catherine Belkhodja chatting in a rambling and unstructured way to the screen – and this is regrettably the usual pseudo-intellectualism that takes up much of French cinema, covering such subjects as the meaning of life according to game metaphors and a (rather naive) view of the internet. At about the point that she started having imaginary conversations with a plastic parrot, I gave up on the film.

Certainly as a documentary, Level Five is not uninteresting. It has a point-of-view, which is all too rare in documentaries these days. When making a case as to how the camera conspires to ‘kill’ people it is filming – where Chris Marker shows footage of a woman jumping from the cliffs at Okinawa and a man trying to fly from the Eiffel Tower to his death in a crackpot set of wings, with both looking at the camera in a moment of doubt and then jumping because it is there – or when he is deconstructing the truth behind the raising of the flag at Iwo Jima – that it was posed by soldiers who were never there in actuality – and showing the unused footage of the napalmed Vietnamese villager that became one of the great shock-horror images of the Vietnam War (the unused portion showing the villager getting back up unharmed) – Level Five is highly persuasive. The film’s recounting of how the entire population of the island of Okinawa were persuaded to commit suicide as a pawn in the war is horrific.

Marker does stray from the topic frequently and the film’s effect only comes in sporadic moments. There are also times when Marker fails to back up his claims – the ending states that the Battle of Okinawa led to the development of the atomic bomb and the shape of the rest of the 20th Century but offers no evidence to substantiate such an extraordinary claim.