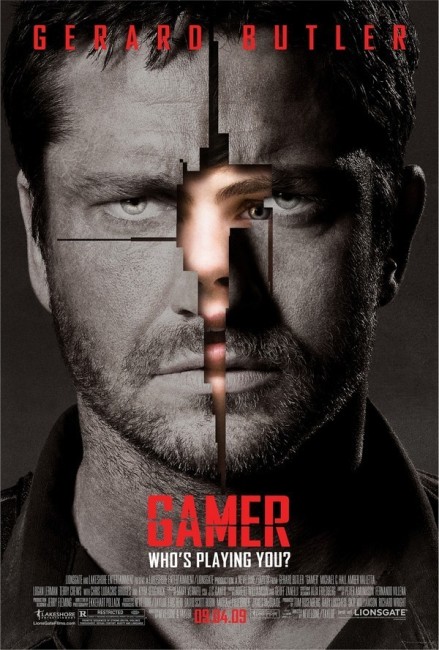 In the near future, Ken Castle has become the most successful businessman in the world with the videogame Slayers. In the game, players control and play real people as they shoot others in combat situations. Those inside the game are former prisoners who have been turned over by the Justice Department where some of their brain tissue has been replaced by nanotechnology, allowing players to control their bodies. Under the name Kable, former soldier John Tillman, who is controlled by the teenager Simon Silverton, has become the most successful Slayer in the world and is nearing the point where he will win enough games to earn his freedom. However, the Slayers games are being hacked by the revolutionary group Humanz. Their hack allows Simon and Tillman to hear one another’s thoughts. They ask Simon to switch the controls off and allow Tillman to make his own moves. This enables Tillman to escape from the game’s confines whereupon he heads back to reunite with his wife and daughter. This also makes Tillman into a fugitive with Castle determined to stop him because he poses a threat to his plans for world control.

Gamer is an interesting effort, although only did modest box-office and received poor write-ups when it appeared on cinema screens. Gamer comes from the creative duo known as Neveldine & Taylor. This immediately sets off alarm bells as any director who only goes by a single name is almost invariably full of pretensions – see the likes of Kaos who made Ballistic: Ecks vs Sever (2002), Pitof of Catwoman (2004) notoriety and most famously McG. In reality, Neveldine & Taylor are Mark Neveldine and Brian Taylor, a duo of multi-disciplinary talents in their thirties who have acted variously as directors, screenwriters, actors and several other cinematic tasks.

The two appeared as the directors of the absurdly hyper-adrenalised action hit Crank (2006) with Jason Statham as a hitman injected with a poison that will kill him if his heart-rate goes anything less than full tilt – the sex in the middle of the crowded marketplace scene must count as one of the most absurd moments on screen in the 00s. Neveldine & Taylor went onto direct the sequel Crank 2: High Voltage (2009) and also churned out scripts for the medical psycho-thriller Pathology (2008) and the DC Comics adaptation Jonah Hex (2010). They subsequently went onto direct the ridiculous Ghost Rider: Spirit of Vengeance (2012), while Neveldine solo directed the exorcism film The Vatican Tapes (2015) and produced Officer Downe (2016) and Urge (2016), while Taylor went on to make the mass insanity film Mom & Dad (2017) and create the splendidly deranged tv series Happy! (2017-9) and the Dystopian future mini-series Brave New World (2020).

Gamer was the first to tap into one of the oddest cinematic fads of 2009 – films about players mentally inhabiting physical avatar bodies, which we also saw played out in both Surrogates (2009) and the mega-success of Avatar (2009). Each of these approached the concept in very different ways. For Surrogates, the practice merely became a slightly more enhanced version of the real world but was eventually seen as something that distanced humanity from itself; for Avatar, it ironically allowed transportation into an anti-technological back-to-nature Eden. Gamer emerges as some weird mix of Surrogates/Avatar, a game of Counterstrike and The Running Man (1987) wherein prisoners were made to fight for public entertainment. This latter theme is a common one in science-fiction, having appeared other works like Turkey Shoot (1983), Death Race (2008), The Hunger Games (2012) and all the way back to Punishment Park (1971).

Neveldine & Taylor make an interesting attempt to replicate the world of a MMORPG shooter game like Counterstrike using real people. However, I have a fundamental problem with the basic credibility of the film’s future world where players can control others and direct them to shoot others in a combat zone. I find it extremely hard to believe that any sane lawmaking body would not be totally outraged at the idea of handing over prisoners to a videogame designer to have their brains partially replaced and them then armed and turned into live target practice for teenage videogamers and given full licence to kill other humans. As with many science-fiction films, you try to give the writers enough rope to see where they take the idea. Elsewhere, the plotting is decidedly slapdash at times – the Humanz, for instance, never seem to exist as anything more than a deus ex machina to get Gerard Butler out of the game and it is never made clear how doing so aids their manifesto.

On the plus side, you cannot deny that Neveldine & Taylor create a fascinating future world, filled with tiny details that make the future seem densely real. There is a great scene where Logan Lerman sits down in his room on a beanbag and activates the touch screen walls all around him using his feet, opening a series of video conversations from other players, which then disintegrate into two teenage girls bitching at one another between video windows. There is another fine scene where we visit the brothel where Amber Valletta works where everyone seems dressed up in Day-Glo versions of Japanese Lolita fashions. The most interesting parts of this is where we follow her through a sleazy seduction scenario to then find that the fat slob (Ramsey Moore) player we see intercut throughout is controlling Amber as opposed to playing the guy role as we might assume, only for Gerard Butler to burst in on the run and drag her away while she is still being controlled and trying to communicate with the player to direct her what to do as they are being shot at. A visit to a rave comes overloaded with way-out visuals including human cat’s cradles, characters swinging on hooks pierced through their skin and a roller derby of dancers. Or background images of a news channel where cynical anchors sit smoking. It is these tiny little touches that make a science-fiction future seem real. However, the basic premise still needed a good deal more in the way of credibility.

The main problem I had with Gamer was Neveldine & Taylor’s overly insistent visual style. Gamer is shot in the same way as the Crank films – a maddeningly hyper-caffeinated, hyper-adrenalised visual blur that feels like it is being filmed by Ritalin-deprived kids. The revved-up action, the blurred undercranked pace and constant jumpcuts soon become visually numbing. Neveldine & Taylor seem obsessed with shots of vehicles spinning in slow-motion, of people being often bloodily shot and these are repeated ad nauseum. I know all of this is meant to involve you in what is going on but with me it had the contrary effect of only drawing attention to its self-conscious posturing. There seems no reality, no viscerality to it, just empty graphics. As action, it is no more than mere eye candy.

The characters seem less than one-dimensional. Gerard Butler is a hero that seems a monosyllabic blank. I have developed an increasing respect for Michael C. Hall as an actor, first on tv’s Six Feet Under (2001-5) and especially in his subsequent role on Dexter (2006-13). While Hall excels in these, which require him to play an outwardly square and slightly ill at ease guy with a dark side underneath, he fails miserably at playing a super-villain bent on world conquest here. The role is a comic-book one and Michael C. Hall’s poor decision is to camp it up and go OTT. The most absurd scenes are at the climax when Hall whips off his shirt, exposing his scrawny physique, and starts to kick around the tough and physically buffed Gerard Butler. On screen, it is a laughable action sequence because it only looks like the proverbial pale-skinned, 98-pound weakling trying to beat up the champ, and a scene where neither the directors nor the respective actors seem to have any clue how silly it looks.