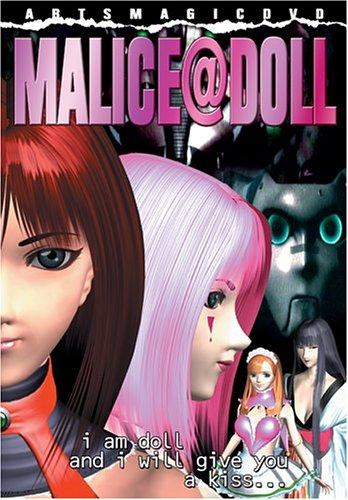 It is in the future where robots are all that remain after humanity has destroyed itself. Malice@doll is one such robot, having originally been constructed for use as a sex doll. She tires of living among the other dolls who all do the same thing every day. She then sees an apparition of a young girl. The girl leads her to an unknown part of the complex where a tentacled creature snatches her. Afterwards, she finds that she has been transformed into a human girl. As she tries to understand what has happened to her, Malice is rejected by the other robots. She then finds that by kissing the other machines, she is able to transform them into living organisms as well. She eagerly goes about kissing them, seeing that in transforming them she is bringing them happiness, while they in turn kiss others. However, as the transformations spread, she starts to see that that the organic forms she has created are something grotesque.

Malice@doll is a fascinating anime. It was first released in three OVA (Original Video Animation) episodes – a Japanese phenomenon where animation is often released directly to video in short episodes – and later repackaged as a feature film. It is certainly a unique and original experiment. The film was computer animated but has been made in a way that is very different to most computer animation. The camera, for example, is static throughout and does not make use of the fluidity of the 3D environment that most CG animated films do.

It is also made on a much lower budget than other CG films and, as a result, feels more like the graphics for a computer game compared to say the equivalent work conducted by Pixar and the almost photographic hyperrealism of the same year’s Final Fantasy: The Spirits Within (2001). You could perhaps say that it is B-budget CG animation. This is clearly evident in many places – the frame frequently remains still, while there is usually only one moving element within in at a time. Yet this is also something that the film also uses to its advantage to create a peculiarly unreal dream-like mood.

The film has a wild and interesting plot. In the interview accompanying the dvd, screenwriter Chiaki J. Konaka says that he was inspired by the Claymation shorts of Jan Svankmajer. Konaka lists a profusion of sources – everything from Alice in Wonderland (1865) to Blade Runner (1982) and vampire movies. If anything, the film tends to play out like a perverse Cyberpunk take on Pinocchio (1940), or maybe a version of The Stepford Wives (1975) conducted in reverse – and with H.R. Giger thrown into the mix.

One quite liked Konaka’s play of ideas. The film has a dreamily slow pace – at the outset, it could be something that plays as a standard Cyberpunk anime but then it slowly opens out into something astonishing. It is a film where one genuinely has no idea where it is going at all. The various organically transformed robots are grotesque creations – the film has a queasy foreboding as one waits to see each new creature it brings out. There is also a perverse undertow to the film – we see flashbacks to Malice’s use as an S&M sub and vignettes of the various non-humanoid creatures engaging in sexual and fetishistic activity, even rape of one another.

As much anime does, the film ends on a transcendental apotheosis that is quite beautiful – even if perhaps it is one where the film leaves explanations for what is going on, and for that matter the agency behind the initial transformation, unexplained. Nevertheless, the result is a peculiarly dreamy fairytale that is both haunting and imaginatively grotesque.