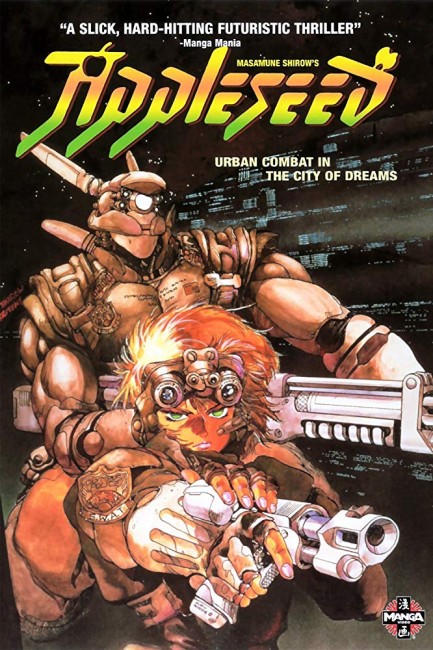 After the holocaust, people live in the city of Olympus where they have been bio-engineered by the General Management Office to be the perfect utopian society. Nan Doonan, a member of a SWAT team that combats terrorists with the use of heavily armed Landmate exo-skeletons, vows vengeance on the terrorist A.J. Sebastian after Sebastian kills her partner. But as she tries to stop Sebastian obtaining the control codes to city’s computer, Nan starts to become persuaded by his arguments in favour of rebelling against the perfect society.

Appleseed is a fairly typical example of Japanese anime from the late 1980s/early 90s. The film is based on a manga by Masamune Shirow that was serialised in Super Manga Blast magazine between 1985 and 1989. The manga and its various anime developments gained considerable popularity in the 2000s after a further series of remakes and sequels.

The film revels in a hard-hitting ultra-violence and large-scale scenes of mass destruction, and comes overlaid with a Cyberpunk cynicism (the nihilism of which is considerably more refreshing than many Western counterparts). It is an enjoyable piece – the battles between the Transformer-like Landmates and the marvellous scenes of destruction as the multipede cannon blasts its way through the city are wonderfully exciting. The heroine is an appealing character, tough and aggressive while still retaining her femininity. (Although one complaint is that with the wide oversized eyes typical to most anime, all the characters seem to be in their teens, which seems somewhat implausible for the hardened SWAT team officers they are meant to be).

Down on the plot level though, a number of confusions exist. Appleseed has a story remarkably similar to Demolition Man (1993). Demolition Man was a Utopian satire that posited the comic idea of a society where current Political Correctness had been extended into the future. Appleseed similarly is an action film dealing with a terrorist who wants to tear down a society where everybody lives in socially engineered harmony. However, Appleseed comes out cautious and uncertain – it seems confused about whether to regard its Utopia of genetically-engineered conformity as a good thing or not. One is never certain whether the film’s loyalties lie on the side of the heroine defending the cloyingly controlled Utopia or on the side of the terrorist trying to tear the system down. The end potently has the heroine, infected by anarchist polemics, just walking away – although the film is unclear about where to, seeming to offer no alternative but a post-holocaust wasteland.

With similar sorts of conceptual confusions the utopia is said to be free of crime, yet it has a police force that is more heavily armed than most armies in the world today; the populace are supposed to be bio-engineered robots but then the film has the heroine trying to appeal to the Hitoshi character’s humanity.

Many of these confusions could just as easily be due to the English dubbing, which gracelessly dubs all the characters over with flat macho taunts and pointless profanity. Although in attempting to create an Anglicised background for the city, the animators don’t do so well themselves – the city is spelt ‘Olumpus’ throughout.

Appleseed (2004) was a CGI-animated remake where director Shinji Aramaki substantially reworked the original Masamune Shirow manga and the background of the future society into an excellent work of considerable depth and is a classic of modern anime. In this version, the background of the society and character conflicts that we see here become much clearer. Aramaki went onto make an original sequel with Appleseed Ex Machina (2007), followed by the prequel Appleseed Alpha (2014).