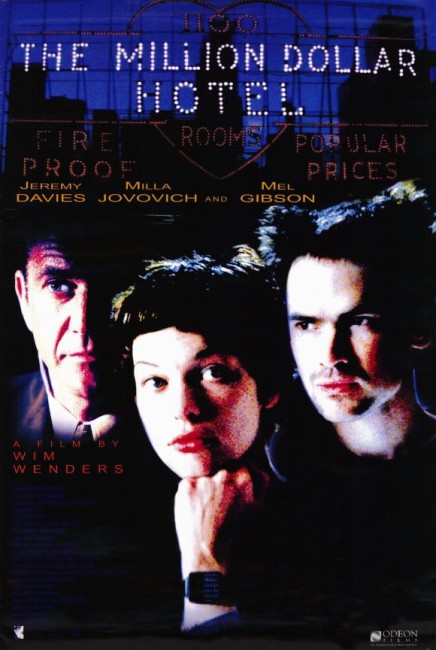 March, 2001. Izzy Goldkiss, the son of a wealthy businessman, jumps off the roof of L.A.’s Million Dollar Hotel, a skid row flophouse filled with social dropouts and the mentally ill. FBI agent J.B. Skinner is pressed by Izzy’s father to find who pushed him. Skinner forms a friendship with the seemingly mentally handicapped inhabitant Tom Tom in an attempt to solve the murder, although he is not sure even if it is a murder or just a suicide. In the course of doing so, Skinner pushes Tom Tom together with the girl of his dreams, fellow tenant Eloise Ash. At the same time, the tenants find themselves in the light of the media attention. Izzy’s roommate, the Indian Geronimo, passes his own paintings off as Izzy’s. When attention starts to gather around these, the inhabitants of the hotel come up with a scam to sell the paintings for a great deal of money.

For a time, although probably less so from the middle of the 1990s onwards, Wim Wenders seemed like one of the world’s great directors. Wenders is a cinematic poet – maybe someone like a Bob Dylan who had turned out as a filmmaker instead of a musician – whose films seem to depict bittersweet characters trying to express or touch something greater than they are. Wenders’ films over the last decade before this became increasingly fantastic – from his duo of angel fantasies Wings of Desire (1987) and Faraway, So Close! (1993) – to the near future road movie Until the End of the World (1991) and subsequently Palermo Shooting (2008) where a photographer encounters Death played by Dennis Hopper.

Until the End of the World, the subsequent The End of Violence (1997) and The Million Dollar Hotel, form a trilogy of sorts – they are cool meditations on the individual and modern society and come filled at the edges with litterings of science-fiction gadgetry. The Million Dollar Hotel, although it could function quite ably without such trappings, sits on the edge of being a science-fiction film – it is set a year in the future from when it was made (although by the time it was released to the majority of the US, its setting date of March 2001 was redundant) and features a proliferation of science-fiction gadgetry such as the three-wheeled cars and designer motorised scooters in the streets, hi-tech bugging systems, and Mel Gibson’s earpiece cellphone (this was way before the advent of Bluetooth) and weird spinal implants.

The Million Dollar Hotel represents a collaboration between Wim Wenders and Bono, lead singer of the mega-successful rock group U2. Bono and U2 have collaborated on the soundtrack all of Wenders’ films of the 1990s and have credited Wenders with inspiration on their records. Here Bono not only composes several songs and makes a brief cameo appearance in the background of the hotel’s lobby, but also co-produces and came up with the original story idea for the film. It is an interesting meeting of minds as U2 are a group that touch upon the same poetry and internal aches that Wenders does and in their often flamboyant stage shows – particularly the ingenious 1994 Zoo-tv tour, which crafted the amphitheatre of the concert arena into a meta-fictional tv studio that aggressively deconstructed the media image – come close to reaching some of Wenders’ quest for meaning between individual and modern society.

Unfortunately, The Million Dollar Hotel never quite comes off. It received a critical savaging from the point of its premiere at the Berlin Film Festival in February 2000. Wenders has clearly set out to make a film about a group of marginalised social dropouts – junkies, the mentally ill – in an L.A. fleapit hotel. However, it is a romanticised vision of a fleapit hotel that has probably been crafted by people who have never been inside such a place in their lives – it is a vision that most noticeably seems far too homely and far less squalid than the real thing, even though it was shot in the actual L.A. Million Dollar Hotel (which gave Bono the inspiration when U2 shot the videoclip for Where the Streets Have No Name there in 1987).

Wenders’ cast of eccentrics also tires one’s patience, especially the indulgence of some of the performances, notably Peter Stormare in a mock-Liverpuddlian accent insisting that he wrote all The Beatles songs, a performance that should have been given at least half the screen time it ends up getting. So too do Milla Jovovich and Jeremy Davies’ mutual handicapped mannerisms, although at least when these two get together they become quite sweet.

The film seems like two hours of ungainly exposition in search of a structure. The plot toys with various avenues. It is structured like a film noir thriller. And, although this is a genre that Wenders’ has some aptitude for – see Hammett (1983) – the script never tightens the central mystery and offers little in the way of twists and turns to involve one much. At one point, it introduces a twist concerning stolen paintings by name artists but fails to explain anything about what the stolen paintings were doing in the hotel in the first place. Humour lurks in the script and the characters and there is the great satiric notion of the underdogs exploiting their sudden-found media popularity but Wenders gives all this a straightforward reading and leaves most of the inherent satire unvoiced.

Mel Gibson is cast as a resolute detective. Indeed, Gibson’s Icon Productions even co-produced the film but Gibson has misguidedly attempted to play the part as a caricature of a resolute, lantern-jawed Elliott Ness-type detective. Aided considerably by the prop of a metal neck brace and Wenders’ crafting the character as a social wet blanket, Gibson instead comes off as wooden. Some of the scenes between he and Harris Yulin reveal more layered depths – of a character driven by a straight-arrow purity of purpose, but mostly Gibson just seems awkward.

All that is left is a film that spends two hours indulging its cast and circling a plot that never shapes into anything until its last quarter. Certainly, at the end it does bring things to an adequate resolution, playing the characters off and ending on a memorable sense of haunting hope as a dying character makes a very Wenders-esque bittersweet paean to the ordinary beauty of life. Up until then though, the film tires one’s patience.

The One Dollar Diary (2001) was a documentary about the making of the film. Its depiction of Wim Wenders’ unassumingly low-key approach actually makes for a much more interesting portrait than the film itself ends up being.