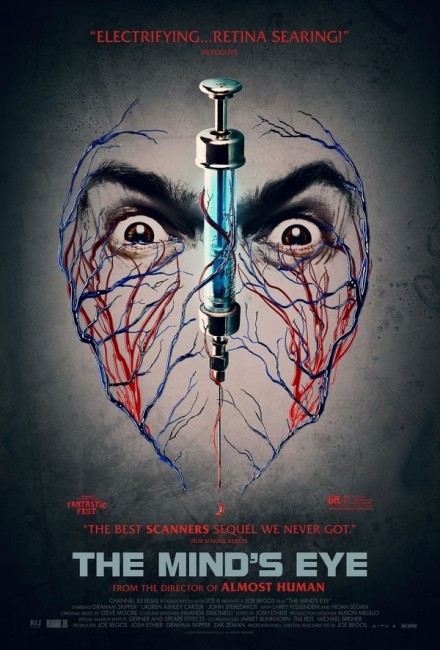 Rhode Island, 1990. Zack Connors is arrested by police in the course of which he demonstrates psychokinetic powers. Zack is placed into the custody of Dr Michael Slovak who runs the Slovak Institute for Psychokinetics where he is injected with a drug that inhibits his powers. Slovak reveals that he has Zack’s friend Rachel Meadows, a fellow psychokinetic, at the institute and will let Zack see her if he cooperates with experiments. However, Slovak is draining Rachel’s spinal fluids and injecting them into himself in order to gain psychic powers. As the wait to see Rachel drags out for months, Zack becomes increasingly frustrated. Having built a resistance against the drug, he unleashes his powers, frees Rachel and breaks out of the institute. They go on the run, pursued by Slovak’s security forces. However, Slovak has injected dangerous amounts of the spinal fluids and transformed into a powerful psychic.

The Mind’s Eye was the second film from Rhode Island native Joe Begos who was 28 years old at the time. Begos had previously made the alien abduction film Almost Human (2013) and went on to make the impressively deranged drug trip horror film Bliss (2019) and VFW (2019) with the intriguing premise of war veterans fighting off mutants.

Begos has construed The Mind’s Eye as a homage to David Cronenberg’s Scanners (1981) and the series of cheap sequels that it spawned – Scanners II: The New Order (1991), Scanners III: The Takeover (1992), Scanner Cop (1994) and Scanner Cop II: Volkin’s Revenge (1995). (The film also homages 80s genre cinema with a score that brings back memories of John Carpenter’s synthesizer work). Unfortunately, Begos is operating on a budget that is even cheaper than any of the Scanners sequels were. The so-called psychokinetic institute is no more than an ordinary suburban house, for instance.

I ended up being disappointed with The Mind’s Eye. You would have thought that a fannish enthusiasm for Scanners would have been great grounds for creativity but Joe Begos does nothing with any of the ideas. Indeed, the plot here is no more than a recycling of the basic elements that served most of the desultory Scanners sequels – psychic boy and girl on the run; crazed scientist wants to do experiments with them; pursuit by assorted goons; much in the way of head-exploding and meltdown effects at the climax. Crucially, what made the original Scanners far more than the parade of head-exploding effects that the sequels became was Cronenberg’s exploration of the ideas but Joe Begos lacks any sense of transcending the material in those ways.

Where Begos does almost redeem himself is during the latter third where he goes to town on the (cheap) makeup effects. The battle in Larry Fessenden’s house ends up in an admirably bloody fight scene. The film finally arrives at an extremely gore-drenched climactic bloodbath, involving heads (and bodies) exploding, levitated axes severing heads and splitting torsos in half, and villain John Speredakos suspended in mid-air and being blown apart.

The film lacks much of a name cast. The most well-known of these is Larry Fessenden, a horror director and producer, who plays the part of Graham Skipper’s father, as well as small roles from Noah Segan and Jeremy Gardner, the director/writer/star of the great The Battery (2012). Fessenden has also brought on board a number of actors who have regularly appeared in his films, including John Speredakos and Lauren Ashley Carter. Carter in particular gave an unnervingly intense performance in the title role in the Fessenden-produced Darling (2015) and it proves somewhat unsettling to see her in a regular part here.