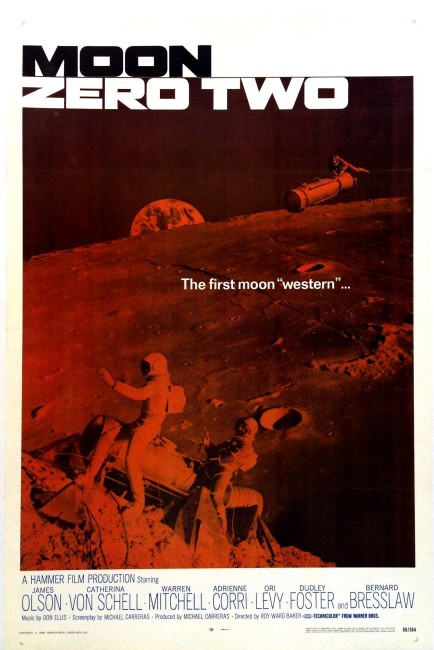 The year 2121. Bill Kemp, once the first man to land on Mars, now works as a lunar salvage pilot in his antiquated, ramshackle ship ‘Moon 02’. He meets Clem Taplin, a new arrivee on the Moon, and becomes involved with her as he helps her investigate the disappearance of her missing prospector brother. At the same time, he is hired by J.J. Hubbard, a crooked billionaire who wants to charter his ship to go and plant rocket boosters aboard an asteroid of pure sapphire so as to land it on the Moon for ready exploitation.

Following their rise in the late 1950s with hits like The Curse of Frankenstein (1957) and Dracula/The Horror of Dracula (1958), the name of Hammer Films had become synonymous with horror. Around the time that they made this film, Hammer were making numerous Frankenstein and Dracula sequels with Christopher Lee and Peter Cushing and assorted other horror films, usually in period settings. Moon Zero Two was one of their rare ventures into science-fiction and is very different to what one had come to expect from a Hammer film.

Moon Zero Two was released two months after the Moon Landing and was clearly an attempt to exploit the then interest in matters Lunar. Alas, it finds Hammer ill at ease in knowing exactly how to handle futurist science-fiction. While they had made various ventures into science-fiction such as X the Unknown (1956), The Damned/These are the Damned (1961) and the Quatermass films – in fact, director Roy Ward Baker had just come from directing the third of these, Quatermass and the Pit/Five Million Years to Earth (1967) – most of these are sf-horror hybrids and do not involved speculative future scenarios.

As a result of Hammer’s seeming uncertainty, Moon Zero Two was billed with the unappealing concept of “the first space western”. The characters are stock types drawn from the Western – the ruthless land baron, the good sheriff, the prospector. The wild frontier aspect is played up with anti-gravity barroom brawls, astronauts riding asteroids that look suspiciously like horses, while even the Farside general-store looks incongruously like it has a tethering post outside it in the vacuum.

Many people look down on Moon Zero Two as a result of the ‘Space Western’ thing – I have heard it called Hammer’s worst film – but I would actually it is not a bad film. In fact, one is prepared to argue its merits as an unsung science-fiction gem. The space western silliness never intrudes too much on the otherwise serious story. It has a more-than-credible screenplay that develops a worthwhile and intelligent story out of a credible Lunar scenario, giving a realistic seeming speculative glimpse of life on The Moon, imaginatively extrapolating facets of technology for dealing with the lunar frontier, which is exactly what a good science-fiction film should do. The journey across the lunar sunrise is an evocative, impressive sequence.

Unfortunately, the film is made on one of Hammer’s usual economy budgets and the effects and sets don’t have what they need to fully carry the vision, especially in having to ignore depiction of the effects of the Moon’s one-sixth gravity. The animated credits and jazz score incongruously mimic the absurdities of 1960s films like The Pink Panther (1964).

Amid the cast line-up, this was the first English-language leading role for Hungarian-born Catherina von Schell [born Catherina Schell von Bauschlott]. She later anglicised her name to Catherine Schell, appeared in various of the James Bond and Peter Sellers’ Pink Panther films, before attaining fame as the perkily sexy shape-changer Maya in the second season of tv’s Space: 1999 (1975-7). American actor James Olson appeared in one other Hammer film Crescendo (1970) and then his big role as the lead scientist in The Andromeda Strain (1971).