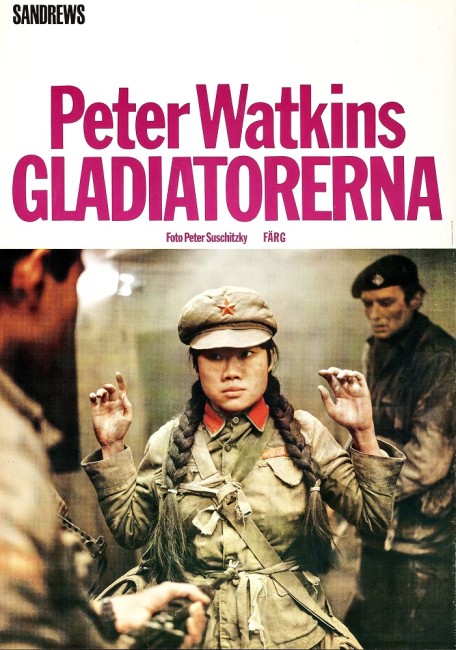 aka The Peace Game
(Gladiatorerna)

In the future, in order to prevent war, the nations of the world hold The Peace Game where selected soldiers from each country fight in a simulated war zone. This has become one of the most popular forms of televised entertainment in the world. The 246th Peace Game is held on the grounds of a chateau in Sweden. The generals gather to watch from the house. Soldiers have been divided into teams made up of Eastern and Western allies. The Western soldiers attempt to complete the mission objective of capturing the control room while coming under heavy fire. At the same time, a disaffected French activist attempts to break in and sabotage the game as a protest against the corrupt controlling system.

Peter Watkins is a British filmmaker who pioneered a form of mockumentary with his first film Culloden (1964), made for the BBC where he depicted the historic battle in a documentary style including interviewing the combatants on the battlefield. Watkins next made the extraordinary The War Game (1965), a fictionalised documentary depicting the outbreak of nuclear war in Britain but this was banned by the BBC before being given a theatrical release. Watkins next broached regular drama with the theatrical film Privilege (1967), a politicised SF film about the manipulation of a rock star. Dissatisfied with that film’s poor reception and the censorship over The War Game, Watkins left the UK and relocated to Sweden where he made The Gladiators/The Peace Game and many of his subsequent films.

Subsequent to this, Watkins made one other SF film with Punishment Park (1971), an incredibly stark work set in a future where prisoners are forced to engage in a death game where they are hunted through the desert, but this met with poor distribution because of its highly politicised content. Watkins has made a number of other films over the years, including Edvard Munch (1974), Evening Land (1977), The Journey (1987), The Freethinker (1994) and La Commune (2000), although no other genre works.

The Gladiators/The Peace Game comes with the interesting idea of a future where war is conducted by proxy armies selected from various nations around the world. There have been some antecedents for this idea on screen before – the Star Trek episode Arena (1966) had Captain Kirk forced to represent humanity in combat, while another Star Trek episode A Taste of Armageddon (1967) saw two planets conducting war where the outcome was decided by computer and the dead simply marched into execution chambers. The same year as this saw the Doctor Who episode The War Games (1969) in which various armies from all over history were plucked out of time to play out in wars.

The basic premise of idea of The Gladiators/The Peace Game trickled into big SF films in the years to come with films such as The Challenge (1970), Rollerball (1975), which saw a future where world peace was maintained by immersing the populace in ultra-violent gladiatorial sports, and Robot Jox (1989) in which the East and West conduct symbolic wars with the use of giant Transformer robots. Like several other works of this era, Watkins sees tensions between Communism and the West extending well into the future when in fact they lasted a mere twenty years after the film’s release.

Perhaps what The Gladiators/The Peace Game presaged more than any of these was the theme in which gladiatorial games, to-the-death fights and human hunting are televised for the masses or snuff internet audiences. It is not a major theme here but is part of the background. Ahead of course would be the like of Rollerball, The Running Man (1987) and The Hunger Games (2012), among others. (For a more detailed overview see my essay Films About Human Bloodsports and Death Games).

In many regards, The Gladiators/The Peace Game is a Peter Watkins film as usual. There are the mock interviews with the soldiers about to go off to war – a technique he pioneered on Culloden. There is also the interview with a revolutionary planning an attack to infiltrate and bring down what he regards as a corrupt system, which prefigures the protestors in Watkins’ subsequent Punishment Park. In common with that film there is also the images of a police force in riot gear seen beating up said protestor, an image that holds a stark echo of contemporary 1960s politics at Kent State and the Long Hot Summer of 1967.

Perhaps the starkest moments come in the contrasts between the callow innocence of the youths we see interviewed at the start and then see fighting in a brutal war situation with the military commanders sitting in comfort in the mansion being served tea and meals, dozing off in their seats or making supercilious comments about the show being placed on before them.

The main failing of the film is that Watkins does not have a good conceptual grasp on how the scenario operates. There’s the soldiers fighting to get to their objective of the control room up against an enemy where we are told that no side ever wins. (The other side remains faceless apart from one captured Chinese soldier). There are also numerous cutaways to a control room and two technicians who push buttons to activate various scenarios where we are told that the deaths have been calculated in advance (presumably by a computer controlling everything). It is not clear how this works in actuality – like how the push of a button could control the actions of soldiers in a combat situation including predicting deaths in advance. You can only speculate that Watkins might have made a very different film if he were making The Gladiators/The Peace Game a few years later and could tie into Virtual Reality themes or even the whole reality tv concept.