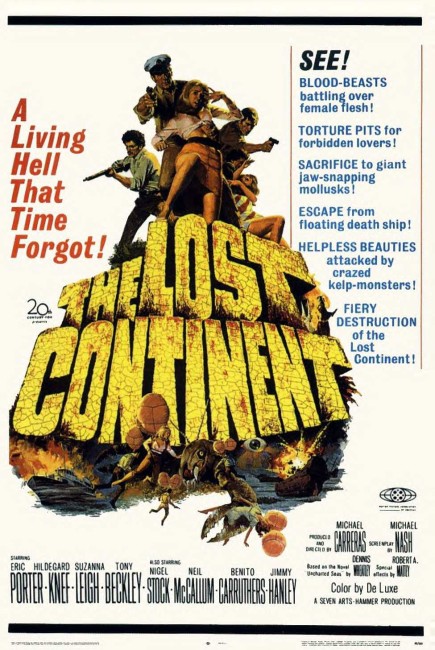 The freighter Corita sets forth bound for Caracas under Captain Lansen with a small handful of passengers aboard. The first officer Hemmings is concerned when Lansen tears up notice of a hurricane warning and orders them to continue into its path rather than return to port. Moreover, he learns that the ship is also hauling a cargo of the explosive Phosphor-4, which is highly combustible when brought into contact with water. They head into the hurricane, at the same time having to deal with a mutinous crew, a fraying generator and a rupture in the hull that is flooding the compartment containing the explosives. Lansen orders them to abandon ship, although they are able to reboard after the hurricane quells. They find they are now in an area of the Sargasso Sea, surrounded by a living mass of seaweed that impedes their progress and is home to monstrous creatures. They also realise that the area is surrounded by ships from all time periods that are lorded over by the descendants of Conquistadors who maintain the Church’s iron control with the help of an Inquisition.

Dennis Wheatley (1897-1977) was a prolific writer and produced a number of books on the subject of Satanism, black magic and the occult. Less known are Wheatley’s historical adventure stories, spy stories and occasional ventures into the lost world theme. These latter include Uncharted Seas (1938), the book from which The Lost Continent is adapted .

Wheatley’s most famous work was The Devil Rides Out (1935), which Hammer Films brought up and adapted to the screen with The Devil Rides Out (1968) and remains one of their best films. Hammer released The Devil Rides Out and The Lost Continent a week apart in the UK, clearly in the anticipation of sparking a boom of interest in Wheatley adaptations. However, the only other Wheatley work they adapted was the Satanism film To the Devil a Daughter (1976). However, Wheatley deplored the abandoning of most of his book and refused to allow Hammer to continue with any other planned adaptations. The only other of Dennis Wheatley’s works on screen has been The Haunted Airman (2006), a BBC adaptation of The Haunting of Toby Jugg (1948).

Hammer Films were at the peak of their success in 1968, having hit a box-office stride with their reworkings of the horror classics beginning a decade earlier with The Curse of Frankenstein (1957) and Dracula/The Horror of Dracula (1958). Throughout the 1960s, they had made a string of sequels to their Dracula and Frankenstein films and a number of other horror works, which had enjoyed great popularity. (For greater detail see The Anglo-Horror Cycle).

The Lost Continent is different to most of Hammer’s other works and should be considered adventure rather than horror. A couple of years earlier, Hammer had created a prehistoric adventure cycle with One Million Years B.C. (1966), which they followed with Michael Carreras’s Slave Girl/Prehistoric Women (1967), When Dinosaurs Ruled the Earth (1970) and Creatures the World Forgot (1971). They had also ventured into the lost city adventure with their version of She (1965). The Lost Continent should be grouped among these films.

In contrast to these films, The Lost Continent is a modern film – it has more in common with A Night to Remember (1958) than it does One Million Years B.C. Indeed, the film here essentially created the template of a group of modern or more commonly Victorian travellers encountering a prehistoric world inhabited by monsters and dinosaurs that became a lucrative theme that was mined by Amicus, director Kevin Connor and star Doug McClure a few years later with a series of films – The Land That Time Forgot (1974), At the Earth’s Core (1976), The People That Time Forgot (1977) and Warlords of Atlantis (1978). The premise of a lost corner of the ocean where ships go missing and there is a society made up of descendants from the Conquistadors existing into the present-day almost certainly influenced the Peter Benchley-adapted film The Island (1980), which substituted pirates for Conquistadors but is otherwise similar.

Surprisingly, the titular lost continent doesn’t turn up for more than half the running time. (Continent does seem to be stretching the description, as all we have are a few ships stranded in a floating mass of seaweed and a small rocky outcropping). There is the even further oddity of a lost world film opening with a folk song on the soundtrack.

The dramas aboard the ship hold the interest where all of the characters are crafted with edges that are more interesting than usual, not to mention come with suggestions of backgrounds they are running from and much in the way of backbiting and desperation. (The disappointment of the film is that these backgrounds prove of very little relevance to the rest of the story). Eric Porter – a Hammer regular in films like Hands of the Ripper (1971) and The Thirty-Nine Steps (1978) – gives a harsh and domineering performance that has some noted moral ambiguities. (The way Porter is made up, you would swear he is a lost brother of F. Murray Abraham).

With the entry of a tentacled monster with one glowing green eye, The Lost Continent abandons all of this and heads for the realm of the cheesily ridiculous. The effects come out as only slightly better budgeted versions of the tatty creatures in the average Doctor Who (1963-89, 2005– ) episode of the same period. The scenes of two giant mollusc creatures fighting looks like something out of a 1960s/70s era Japanese monster movie. There is a somewhat better monster that El Supremo/Diablo keeps in his hold to which he throws interlopers – one is reminded of the Sarlac in Return of the Jedi (1983). It is probably of some consolation to the film that much of the action in the seaweed sea is covered in mist as that conveniently allows them to prevent the monsters from being fully seen.

The images of the orange-lit Sargasso Sea look striking, as is the strange sight of people wading across the seaweed lifted up by balloons and makeshift snowshoes. The world of the Conquistadors when we discover it aboard a sailing ship has an incredible vividity. The complaint might be that the build-up of the film is far more interesting than anything that happens once we reach the Sargasso Sea. The monster scenes never amount to much and the Conquistadors are defeated quickly and then the film is over. You feel like The Lost Continent had the potential to do far much more than that.

The Lost Continent was one of the handful of occasions when Hammer producer Michael Carreras, grandson of the company’s founder, stepped out of a producing role and into the director’s chair. The film had started shooting under Leslie Norman, the director of Hammer’s X the Unknown (1956), but he was fired soon into production. Carreras also directed two of Hammer’s non-genre war films with The Steel Bayonet (1957) and Visit to Canton (1961) and several of their more staple genre efforts such as the psycho-thriller Maniac (1963), The Curse of the Mummy’s Tomb (1964) and the prehistoric adventure Slave Girls/Prehistoric Women (1967).