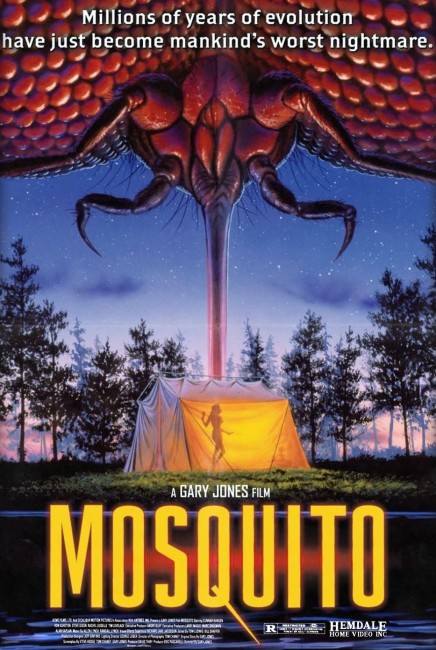 An alien spaceship crashlands near a national park. Ray is driving his girlfriend Megan to her new job as a ranger when a giant-sized mosquito crashes into and damages their car. They are forced to sign into a motel until new car parts can be sent. Ray manages to get them a ride with Parks, a NASA scientist sent to track the meteorite they believe came down. In no time, they are being attacked by ferocious swarms of giant mosquitoes that suck the blood from every human they find. The park’s campsite is slaughtered. To survive, they and a handful of others are forced together in the company of Earl and his brother who are escaping with the proceeds from a bank robbery.

Mosquito came out in 1995 and is poised just between two major trends in the creature feature film – the makeup effects and popcorn horror industry of the 1980s, which was dominated by Alien (1979) copies and low-budget cheesy efforts like Ghoulies (1985), and between the rise of the low-budget CGI monster movie in the mid-to-late 1990s, following the success of Jurassic Park (1993).

As a result, Mosquito is a film entirely premised on the provision of creature effects every few minutes. These are played for a maximum degree of cheesy absurdity. The most preposterous of these is one where a couple are making out in a tent, the guy (Josh Becker) goes out to take a piss while the girl (Margaret Gomoll) lies inside naked, enjoying it as a tentacle creeps up her leg before a giant-sized mosquito bursts in, slavering all over her and sucks the blood out of her butt.

The makeup effects are entertainingly ludicrous, like where the mosquitoes are seen sucking blood up into transparent sacs like pumping machines or where they are capable of reducing a victim to a withered husk in seconds while also causing their eyeballs to pop out. Of the effects, the full-sized animatronic mosquitoes are not too bad, although the optical shots of the flying swarms are much less so.

Mosquito is a stupid film, albeit not unentertainingly so. It is filled with moronic characters – the bullying ranger (John Reneaud), the park boss (Guy Sanville) and especially the two hick bank robbers that accompany the group. There is little attention to script beyond the minimal – case in point being where we see a spaceship crash on Earth in the prologue scenes and then everywhere else it is referred to as a meteorite.

The sole name that has any recognition factor in the film is Gunnar Hansen who played the original Leatherface in The Texas Chain Saw Massacre (1974). Hansen is okay, although there is an inevitable groan-worthy scene where he discovers a chainsaw in the cellar and revs it up saying “Man, haven’t handled one of these babies in twenty years.”