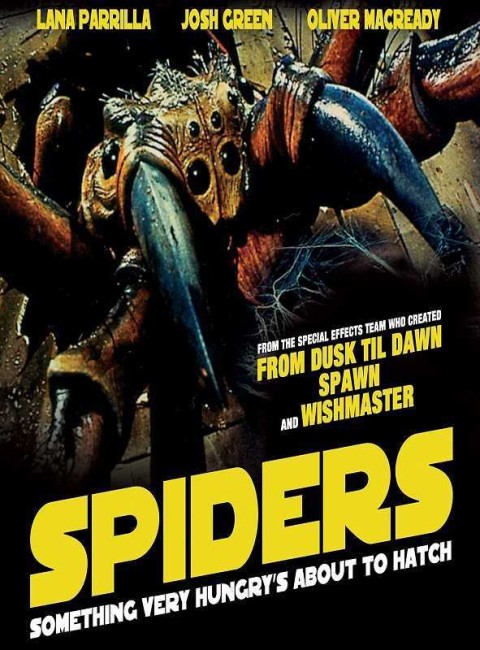 NASA conducts an experiment sending spiders up on a shuttle mission but something goes wrong and causes the spiders to mutate and attack the shuttle crew. Meanwhile, Marcy Eyre is getting in trouble where she works on the Hamden College student newspaper because she constantly tries to run stories about alien abductions. Instead of covering the shuttle launch as she is ordered to, she persuades two co-workers to join her in investigating a locale one of her interviewees identified. There they are then witness as the shuttle crashes nearby. They venture inside the crash to see spiders everywhere. Government agents arrive and remove the astronauts’ bodies before destroying everything. Marcy and the others sneak aboard the truck as it heads back to the agents’ base. Inside they are witness as a large spider emerges from inside an astronaut’s body. Soon the entire facility is overrun by giant spiders.

Spiders is a fairly poorly made film in many regards. There are numerous levels on which it struggles to maintain even a basic level of credibility. One of these is heroine Lana Parrilla whose gullibility about taking crackpot stories seriously and ignoring her actual assignments to follow her own leads, as well as taking other members of staff with her, should have had her fired from any respectable newspaper in about five minutes flat. The script never offers any explanation for what causes spiders sent up on a regular space shuttle mission to mutate into something giant sized. And then there are the government agents who enter a shuttle crash (as opposed to NASA who would surely have tracked the descent) without any quarantine procedures and pick up alien organisms with their bare hands.

The action scenes are frequently ridiculous – the lead characters fall seemingly forever down an elevator shaft and are then saved after they land on a massive spider web that has been spun in the fifteen or so minutes they have been running around the complex. The climax of the film involves Lana Parilla trying to fire a rocket launcher – one that the government agents just leave sitting around untended in the back of a helicopter – at the giant spider as it sits atop a sports stadium before getting a rope caught around her foot and left dangling out the helicopter door while trying to fire directly into the spider’s mouth. Equally, much of the action is just dull – the scenes at the government base, which take up the middle of the film, just consist of lots of running around the corridors of an industrial plant.

Where Spiders does almost redeem itself is in its effects from top Hollywood effects house K.N.B. EFX Group. There’s a fantastic effect where a spider forces its way out of the dead astronaut’s mouth, followed by lots of scenes around the plant fighting off increasingly larger spiders. There’s also a highly entertaining scene where giant spider legs burst out of Mark Phelan’s back, followed by one about the size of a Mac truck rampaging across the campus, at one point stopping to rip the roof off of a cop car.