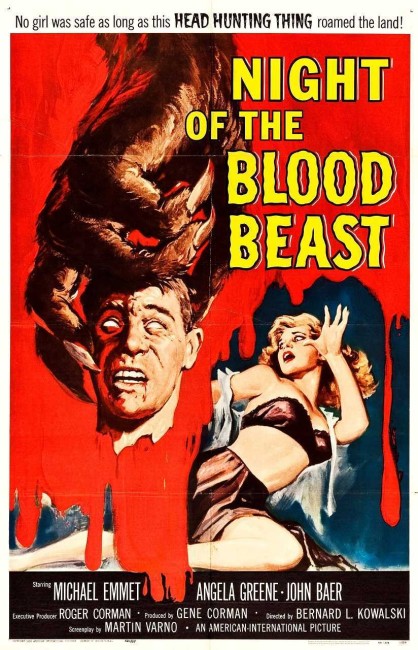 Major John Corcoran has been launched in the X-100 satellite but this crashes down. His support team rush to the crash site and retrieve Corcoran’s dead body. Back in the laboratory, it is determined that something is keeping Corcoran alive. He then makes a miraculous recovery. At the same time, a magnetic field blocks all communication in the area and switches the power off. An alien creature invades the laboratory. Under a fluoroscope, it is discovered that Corcoran has alien embryos implanted in his body. He is certain that the alien’s intentions are peaceful and pleads with the others not to kill it.

Gene Corman has never been as recognisable a name as his brother, the infamous low-budget producer/director Roger Corman. During the 1950s, Gene followed Roger’s lead and produced a handful of B movies – Hot Car Girl (1958), I Mobster (1958), The Secret of the Purple Reef (1960) – and ventured into Roger’s trademark low-budget monster movies a couple of times with Attack of the Giant Leeches (1959) and Beast from Haunted Cave (1959). Gene produced several of Roger’s films during the 1960s and others throughout his career but nothing that comes anywhere near Roger’s extraordinary output of over 400 films.

Night of the Blood Beast would have been one of numerous B-budget films cluttering up drive-in double bills of the era. It was an entry among the alien invader fad of the 1950s. Roger had had success in this arena, directing the likes of It Conquered the World (1956) and Not Of This Earth (1957). Night of the Blood Beast is cheaply made – the monster is simply a suit recycled from Roger’s Teenage Caveman (1958), which was shot around the same time.

The plot is a riff on the one in The Quatermass Xperiment/The Creeping Unknown (1955) of the mutated astronaut returned from space. This was a popular theme among the alien invader fad and was recycled in several other films like First Man Into Space (1959) and The Crawling Hand (1963). This is also the first film in which aliens revive the dead that we saw more extensively used in Invisible Invaders (1959) and Plan 9 from Outer Space (1959). Also the scene where Michael Emmet turns on the fluoroscope and reveals several aliens hosting inside his stomach makes this surely the precursor to Alien (1979) and the whole alien impregnation (and by implication) chestburster scene.

Night of the Blood Beast is cheaply made and directed with what feel like indifferent, hurried set-ups. Most of it is takes place around the laboratory where the group (a cast that in an economy move is contained to five people) ponder what has happened to Michael Emmet who has returned from the dead. He gets to be one of the more interesting characters in the film, arguing against harming the alien and certain that their intent must be peaceful – one of the few 1950s films to do so – before an abrupt turnaround at the end where he joins the group as they eliminate the alien.

Director Bernard L. Kowalski also made Attack of the Giant Leeches (1959) and two other non-genre films for Gene Corman – Hot Car Girl (1958) and Blood and Steel (1959). Kowalski directed a great deal of television between the 1960s and 90s and is best known for films such as Krakatoa: East of Java (1966), the horror Western Black Noon (1971) and one further monster movie SSSSSSSS! (1973).