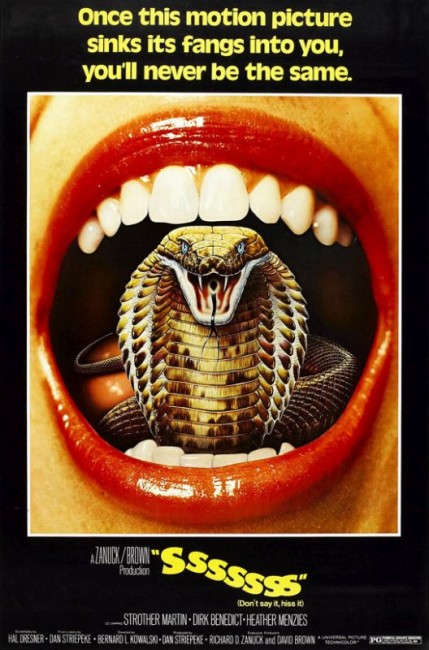 Dr Carl Stoner is a brilliant herpetologist who is regarded as eccentric by his colleagues. Stoner hires David Blake as his new lab assistant and gives him a series of experimental cobra venom injections. As David becomes involved with Stoner’s daughter Kristina, the venom causes him to start shedding skin and his body temperature to lower. What he does not know is that Stoner has injected him with a serum that is causing him to mutate him into a human/snake hybrid that will eventually be capable of surviving a nuclear holocaust.

SSSSSSSS! received a moderately high profile release when it came out. It was an odd throwback to the 1940s mad scientist film. Indeed, director Bernard L. Kowalski comes from this very B movie tradition, having directed the likes of Night of the Blood Beast (1958), Attack of the Giant Leeches (1959) and the horror Western Black Noon (1971). Although what was more than likely at the time was that SSSSSSSS! was conceived as exploiting the interest in Nature’s Revenge films that came about as the result of successes like The Birds (1963) and Willard (1971).

The script was conceived and the film produced by makeup artist Dan Striepike, who had plied his makeup art on all of the Planet of the Apes films and a number of other high-profile films of the era such as Butch Cassidy and the Sundance Kid (1969), M.A.S.H. (1970) and Patton (1970).

The script handles an absurd premise with a degree of straight-faced amusement. Feathery voiced Strother Martin acts his head off as the mad scientist. He has the entire show in the palm of his hands, talking to his snakes, even feeding them alcohol and at one point reading them Walt Whitman.

The use of real snakes is effective, especially when it comes to the various set-pieces bumping off victims. The script holds no real surprise as to what is happening to Dirk Benedict, even though the film takes three-quarters of its running time to unveil this. The snake man makeups are subtly effective, although the finally transformed snake is disappointing and lets down on the careful build-up down.

The film has an interesting cast who all moved onto fame in various late 1970s tv shows – Dirk Benedict starred in Battlestar Galactica (1978-9) and The A-Team (1983-7); Heather Menzies became Jessica in the tv version of Logan’s Run (1977-8); Tim O’Connor was Dr Huer in Buck Rogers in the 25th Century (1979-81) and the following tv series; Reb Brown became the title star of two miserably failed tv pilots, Captain America (1979) and Captain America II (1979); and Richard B. Shull went onto Holmes and Yoyo (1976). Of course, executive producers Richard Zanuck and David Brown would also move onto Jaws (1975) a couple of years later and then the likes of Cocoon (1985), Driving Miss Daisy (1989) and Deep Impact (1998), among others.