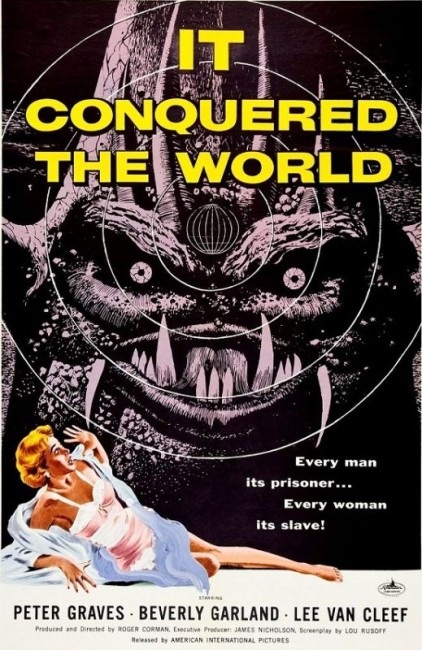 An alien force is sabotaging satellite launches. One such failed launch returns to Earth containing an alien creature. With the aid of the idealistically misguided physicist Tom Anderson, it stops power transmission everywhere and sends forth bat-creatures to enslave the minds of authorities.

It Conquered the World is an essential item in the cult of low-budget director Roger Corman. (See below for Roger Corman’s other films). It was made during the 1950s where Corman was enthusiastically and prolifically churning out next-to-no budget cheapies for exploitation double-bills. The film happily taps into most of the exploitable themes in science-fiction cinema around this period – the alien invader theme, the alien body snatchers theme a la Invaders from Mars (1953) and Invasion of the Body Snatchers (1956), and of course the very topical interest of satellites as a result of the Sputnik launch.

It Conquered the World is a rather entertaining cheapie. There are some undeniably silly bits – like the moment during the power-cut when the cop tells the woman to start cranking her husband’s iron lung by hand. However, if one looks beyond the obvious B-budget tattiness you find a surprisingly high level of out-and-out entertainment. Roger Corman directs in a rudimentary way but some of the possession scenes are good – like the moment technician Karyne Kadler wakes up to find her two fellow technicians have been taken over while she sleeps, they going about their usual thing and it not dawning on us until she finds two dead bats in the soft drink machine. There is a wonderful cheesiness to the design of the fanged cucumber creature, which is lit in such a way that its static rubbery features attain a genuine malevolence.

Lou Rusoff’s plot is squarely centred among the clichés of the alien takeover genre – it is not long before the good old Communist analogies are being wheeled out – when the possessed general wants to impose martial law at the base the readiest reason is ‘Communist Threat’. Surprisingly though, Rusoff transforms the takeover themes into a literate war of ideas – particularly good being when it is shown that the creature is manipulating Lee Van Cleef’s idealistic zeal by pointing out that the creature would create a world where such zeal would be forbidden. In one marvellous exchange, Lee Van Cleef insists to wife Beverly Garland: “I’ll still need you even when there are no emotions,” to which comes the reply that belongs to the dialogue prized among B-movie fans, “For a few dollars you can hire a woman who’ll fulfil all your fetishes. And when you get tired of her you can run down to the employment agency and hire another.”

The ending contains a wonderfully noble eulogy: “He [Lee Van Cleef] learned almost too late that Man is a feeling creature. And that because of it he is the greatest creature in the universe. He learned too late that Men have to make their own way and make their own mistakes and that there can’t be any gift of perfection from outside ourselves. That when we seek such perfection we only find death, fire, loss, disillusionment, the end of everything that’s gone forward. Men have always sought an end to toil and misery and if it can’t be given, it has to be achieved. There is hope but it has to come from Man himself.” That is a fairly good piece of writing for just a B-movie.

It Conquered the World was later remade by Larry Buchanan as the even cheaper Zontar: The Thing from Venus (1966).