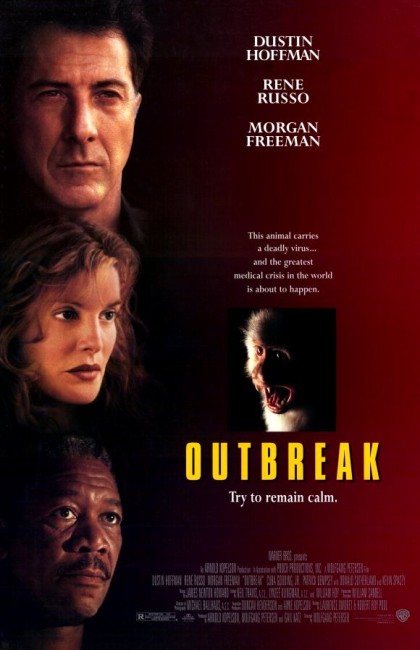 Colonel Sam Daniels, head of the US Army’s viral outbreak crisis centre USARMIID in Maryland, is sent to investigate an outbreak of hemorrhagic fever in Zaire. Daniels is then persuaded by his military superiors to regard the virus as non-lethal. However, a monkey from Zaire is brought into the US aboard a Korean freighter and then stolen by a quarantine employee. The monkey succeeds in infecting people and they in turn infect all those they come in contact with. All die horribly within a matter of hours. Daniels realises the virus has reached the US but his superiors try to prevent him from doing anything about it. Soon entire towns are affected. As Daniels tries to trace the source of the outbreak, he realises that the military are attempting to develop it as a bio-weapon.

Outbreak sought to exploit the scare created in the media over the Ebola virus following the publication of Richard Preston’s non-fiction book The Hot Zone (1995), which detailed the real-life panic that occurred when it was discovered that monkeys infected with the Ebola virus had been imported into the US and the virus was accidentally unleashed in suburban Washington D.C. A film version of Crisis in the Hot Zone planned with Ridley Scott as director and starring Robert Redford. Outbreak was clearly made with the intention of jumping on that expected trend. However, the Crisis in the Hot Zone project never emerged and instead of being a trend jumper, Outbreak became the trendsetter. The book was later filmed as the six-episode mini-series The Hot Zone (2019), produced by Ridley Scott.

Outbreak created a mini-Ebola outbreak trend that was copied by the likes of tv’s The Burning Zone (1996) and films such as Doomsday Man (1998), Thirst (1998) and Venomous (2001). The film’s plot mimics the Hot Zone/Ebola scare closely – the film’s unnamed virus is, like Ebola, a hemorrhagic virus, and has almost identical symptoms. Further, Ebola was first discovered, like the virus here, in an outbreak that wiped out an entire village in Zaire in the late 1960s.

The film has it many ways – it is an action film, a run-against-the-clock thriller, an epidemic outbreak film and a military conspiracy thriller. Petersen marshals the stuff of the epidemic genre with considerable flair. He seems to have a boyish need to play with all the artillery at his disposal and gets great mileage out of the hardware of the epidemic genre – buzzing copters – entire armadas of them, military curfews with jeeps vehicles prowling the streets of small towns and wire fences going up, bombers taking to the air and so forth – and adds a few tricks of his own – such as diving up into air ducts and in one inventive moment even following sneezed germs through the air of a cinema and down into the mouths of unsuspecting patrons. He succeeds in mounting all of this to something exciting, especially the breathlessly suspenseful climax with Dustin Hoffman pleading with the bomber crew to not follow through with their mission.

Behind the film seems to be the strong continuing belief in late 1990s American media – reflected everywhere from JFK (1991) to The X Files (1993-2002, 2016-8) to Body Snatchers (1993) – that the hand of power in America has gone out of control, is being secretly manipulated from behind the scenes by something corrupt and that it is necessary to restore a basic morality. This is most dramatically demonstrated at the climax with Dustin Hoffman in the skies in the path of an onrushing bomber, pleading for human lives below and trying to appeal to the humanity of the people flying the mission and get them to defy the orders of a corrupt high command. It is an extraordinarily potent image.

Outbreak features a large name cast, including some names like Cuba Gooding Jr and Kevin Spacey who were cast in bit parts here just before they became Academy Award winners and got famous. An exacting method actor like Dustin Hoffman unfortunately gets swallowed up, dwarfed by the scale of the action. Hoffman hardly gets what one could call inspiring dialogue and seems to only bawl it out. He does however have some good moments particularly talking to the young girl. Cuba Gooding Jr stands out well. Rene Russo is, as always, bland.