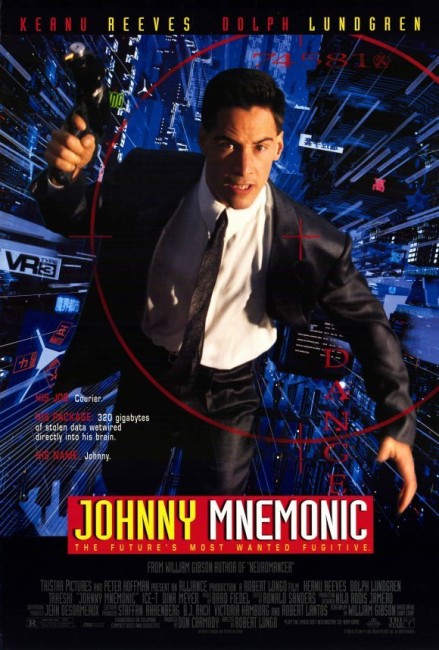 It is the year 2021. Johnny is a mnemonic courier, able to transport data via a silicon wetwire implant in his brain, an effective means of getting around data pirates and hackers. In Beijing, Johnny accepts an assignment from the PharmaKom Corporation and agrees to carry 320 gigabytes of data – which exceeds his 180 gigabyte capacity – because he wants the money. The danger is that if he does not download the data within 24 hours, the resulting neural seepage will kill him. Assassins from a rival corporation burst into the hotel and attempt to kill him. Aided by a female bodyguard and hunted by the assassins who have orders to return with his severed head, Johnny tries to make it to his pick-up point in Newark, New Jersey and download the information before it kills him.

Author William Gibson first came to public attention with Neuromancer (1984), which immediately won the Hugo, Nebula and Philip K. Dick awards in the science-fiction community, something no other novel, let alone first publication, had done before. Even before he had published the next two novels in his connected venue trilogy, Count Zero (1986) and The Mona Lisa Overdrive (1988), William Gibson had become a cult figure. The style of Gibson’s writing was termed Cyberpunk, a phrase coined by science-fiction editor Gardener Dozois that conjured up a world that was neither Dystopian nor Utopian but a densely cluttered outgrowth of the present, inhabited by brand-name consumerism and hi-tech computer gadgetry.

William Gibson and the Cyberpunk genre has always been a natural shoe-in for film adaptation. Gibson’s work is written in a dense visual style that seems naturally cinematic – it is all surface imagery and comes in an at first bewildering burst of fragmentary images. His plots often seem only an adjunct to a densely-laden picture that in itself is only an iceberg tip of a world that it is implied exists beyond the frame of the story. William Gibson is a master of the science-fiction art of conjuring names of objects and casual throwaway descriptions that suggest instead of spell out entire implied cultures and ways of thinking behind them. Not so much information dumping and as what one might call implication dumping.

William Gibson is the only science-fiction writer out there who in any way predicted the nature of the massive contemporary revolution in personal computing in the 1980s, not to mention the fact that he came up with a small notion he termed ‘cyberspace’. His books, with their heroes who are anarchist hackers breaking into shadowy all-powerful corporations, are virtual bibles for hackers and he was celebrated by the likes of the postmodern cultural theorist Frederick Jamieson.

Not surprisingly, Gibson, more so than any other science-fiction writer around, has attracted considerable interest from filmmakers. There have been a number of high-profile directors attached to adaptations of his work – both Russell Mulcahy and Vincenzo Natali have been attached to direct an adaptation of Neuromancer; James Cameron was to have made the short story Burning Chrome (1982); Kathryn Bigelow a version of the short story The New Rose Hotel (1981); and Peter Weir of the novel Pattern Recognition (2003). Gibson himself was attached at one point to the script for Alien3 (1992), as well as several of the aforementioned adaptations of his own work. Gibson tells a funny story about a proposed adaptation of Neuromancer that he found had been financed with laundered cocaine money.

Johnny Mnemonic kicked around as a go-project for a number of years, before going ahead with the unusual choice of celebrated New York artist Robert Longo in the director’s chair. The only other William Gibson works to emerge on screen was Abel Ferrara’s interesting adaptation of New Rose Hotel (1998) and two episodes that Gibson wrote for tv’s The X Files (1993-2002, 2016-8). There have been a handful of Gibson adapted short films, while Gibson himself appears as the subject of the documentary No Maps for These Territories (2000).

For all the popularity that surrounds William Gibson, Cyberpunk has met with mixed success on the screen. Case in point is the film called Cyberpunk (1989), alternately known as Robot Ninja, which was in fact about a psycho with a power drill. There have been a handful of good Cyberpunk films – Blade Runner (1982) (the Cyberpunk film that actually predates Cyberpunk and which Gibson confesses nearly made him give up writing Neuromancer), the Italian film Nirvana (1997), tv’s Max Headroom (1985, 1988-9), the tv mini-series Wild Palms (1993) and the tv series Altered Carbon (2018-20), as well as various anime ventures, in particular Mamoru Oshii’s Ghost in the Shell (1995) and Ghost in the Shell 2: Innocence (2004). There have been a few films such as Hardware (1990), Nemesis (1993) and Death Machine (1995) that have successfully borrowed Cyberpunk imagery for standard killer robot stories. Mostly, films and tv have been only too quick to appropriate Cyberpunk imagery as a kickass future action scenario eg. Total Recall (1990), tv’s Superforce (1990-1), Freejack (1992) and the RoboCop films.

I appear to be in a critical minority in having liked Johnny Mnemonic. When it came out, the film attracted some extraordinarily bad reviews, being variously nicknamed Johnny Moronic and Johnny Numb-onic by critics. It is not difficult to understand the mainstream reaction to it as William Gibson’s dense writing style is not easily accessible to the technophobic. That still does not explain the extremely negative reactions within the genre press. Maybe it was simply that the film lacked pelting action or big effects sequences.

Johnny Mnemonic is a modestly effective film. William Gibson does a reasonable job of expanding his twenty-three page 1981 short story out to a full-length plot. Film necessitates a much stronger story than William Gibson usually has, so he has been forced to concentrate on suspense and character more than he regularly does – even if the plot is appropriated from film noir thrillers like D.O.A. (1950). All the familiar Gibson tropes are there – the social extremes ranging between Japanese executives in designer offices and anarchist data pirates in the ghettos; the journeys into cyberspace via neural jacks; the shadowy Yakuza hitmen wielding ‘monofilament wires’; ghostly AI’s haunting the Net; the lawless ramshackle shantytown built on a disused bridge that was one of the central images in Virtual Light (1992) and All Tomorrow’s Parties (1999) – and it is good to see Gibson visualised on the screen.

Johnny Mnemonic may not be the best science-fiction film ever made but it is still a nifty little effort. And compared to the other would-be Cyberpunk film that turned up at the same time, the mind-numbing Virtuosity (1995), one fails to see what science-fiction has to complain about.

(Nominee for Best Adapted Screenplay at this site’s Best of 1995 Awards).