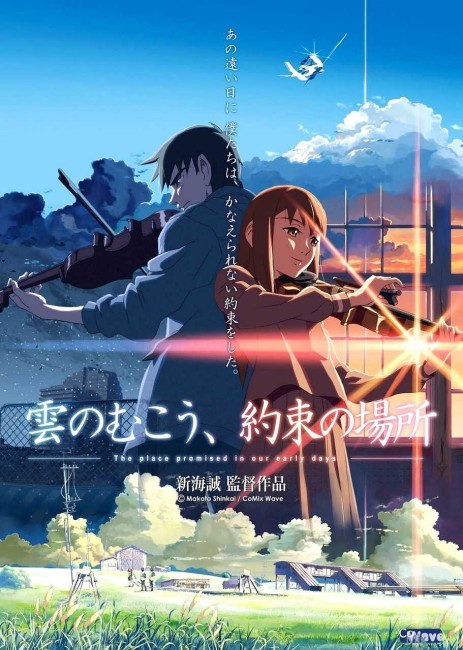 (Kumo no Muko, Yakusoku no Basho)

Since 1974, Japan has been divided into two countries, the American-controlled south and Ezo, the former Hokkaido in the north, which remains secretive and walled off. Ezo has built a mysterious tower of unknown purpose that stretches into the clouds. Hiroki Fujisawa and Takuya Shirakawa are school friends, living in the south near the border between the two countries. The boys take a job in a munitions factory as a means of working on their dream project – a crashed drone plane they are rebuilding and with which they plan to fly across the border to investigate the tower. The boys befriend Sayuri Sawatari, a girl in their class, while Takuya develops an unspoken love for her. They take her into their confidence about the project and she becomes excited about joining the flight. Two years later, Takuya is now working as a physicist with the Americans. The boys abandoned their work on the plane after Sayuri vanished without explanation. The tower has started displacing the area around it with matter from alternate universes. The American military see the tower as a threat and want to bomb it. Takuya now learns that Sayuri has been in a narcoleptic sleep for the past two years and that her dreams are somehow tied to the tower, which was built by her grandfather. He believes that if he and Hiroki can complete the plane and fly Sayuri to the tower, it will awaken her.

Makoto Shinkai is a name that has been gaining growing acclaim in Japanese anime since the early 2000s. Shinkai’s first work was the 25-minute long Voices of a Distant Star (2002) about interstellar email communication. This was followed by the feature-length The Place Promised in Our Early Days and 5 Centimetres Per Second (2007) about a friendship between two people over the years. The work that caused Shinkai’s name to be noticed was Children Who Chase Lost Voices from the Deep (2011), a beautiful fantasy epic in the Hayao Miyazaki style. Shinkai followed this with the non-genre The Garden of Words (2013) and then with Your Name. (2016) and Weathering With You (2019), both of which gained reasonable international attention.

The alternate history theme has gained a surprising foothold in anime, A number of Hayao Miyazai’s films sit there by implication – in particular Laputa: Castle in the Sky (1986) and Kiki’s Delivery Service (1989), as do other more overt works like The Wings of Honneamise (1987), Jin-Roh: The Wolf Brigade (1998), The Empire of Corpses (2015) and The Sky Crawlers (2008). For grater detail see Alternate History Films.

If Hayao Miyazaki were ever to follow through on any of his announcements to retire, Makoto Shinkai would be a clear inheritor of his mantle. He employs a very similar look to Miyazaki – the same ligne claire style, the same detailed backgrounds and beautifully contemplative attitude. The Place Promised in Our Early Days is a film where a great deal of beauty has been invested in depicting the ordinary world. There is a stunning degree of texture placed into the factories and railway platforms, shots of the landscape and the characters walking through them, of sunsets and birds flying through the sky. Shinkai apparently hired students from Tokyo art schools to paint backgrounds and it shows up on screen.

Based on the opening sections alone (the first 25 minutes), I would easily have given The Place Promised in Our Early Days a four star rating. This early section sets up a flawless Coming of Age Story and hint of potential romance, all set against the interesting alternate history backdrop of a Japan that is divided into two countries and of the mysterious tower reaching into the sky that has been built in the other section (my first impression was that this was a space elevator but this turns out not to be the case).

The problem then becomes the rest of the film. Very little is done to explain the nature of the two countries – one gets the impression that Shinkai was trying to imagine Japan divided between North and South in the same way the two Koreas are divided between a Westernised south and a Communist North. (I have seen other commentators state that the North is a Communist satrapy but this is never stated in the film itself).

However, the film then abandons the initial story about the building of the plane and cuts forward two years where the boys have parted ways and Sayuri has mysteriously vanished. It later becomes apparent that she has slipped into a coma. The Coming of Age story is forgotten and we get a different plot about the American-dominated south determining to bomb the tower, which is now displacing matter from other universes and spreading beyond its immediate environs. The boys reunite and find Sayuri who is in a coma and realise that this is somehow related to the alternative universe straddling properties of the tower.

It is an abrupt and confusing jumping of story tracks, least of all for the fact that the plot sketching these things together is vague and not clearly explained. We are never sure why the tower was built, what it is exactly doing and how it is connected to Sayuri other than that she is its creator’s grand-daughter and that her comatose dreams are somehow connected to what is going on (how and why is never made clear).

The film ends abruptly with the boys finally getting the plane working and flying around the tower, which causes Sayuri to wake up just before the tower is bombed. The intriguing alternate history scenario is forgotten by this point and nothing is made of the idea of the tower’s broaching multiple realities – the idea that seemed the most interesting one in the whole show. The ending makes for a sweet romantic conciliation but it is not good science-fiction.