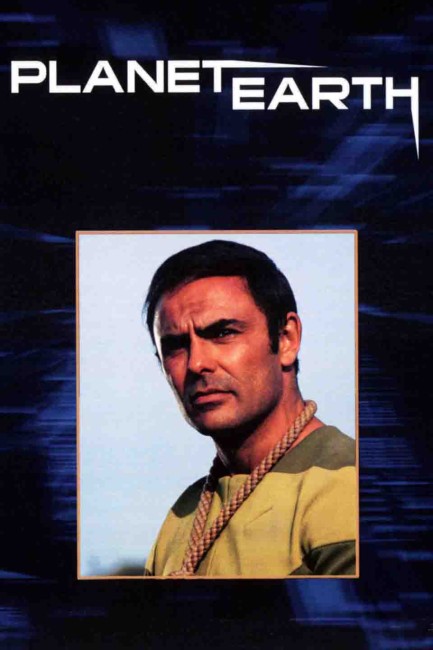 2133 A.D., after the world has been devastated by nuclear holocaust. A team from the scientific enclave of PAX led by Dylan Hunt, the man from 20th Century Earth who was revived from cryogenic suspension, are attacked by Kreeg mutants while on an exploratory sortie and Pater Kimbridge near-fatally wounded. The only person who can save his life is surgeon Jonathan Connor but he has gone missing. Hunt leads an expedition to find Connor. This requires them to travel to the Confederacy of Ruth where women rule and men are kept as slaves. Hunt enters the community pretending to be the property of fellow PAX member Harper Smythe. There he finds that a drug has been placed in the food to make the men docile and afraid. Hunt’s only hope for freedom is to prevent the drug being placed in the food and then lead the men in an uprising.

In science-fiction fandom, the name of Gene Roddenberry has attained the kind of status that the Catholics reserve for saints. Gene Roddenberry is after all the man who created Star Trek (1966-9). Roddenberry has been justly acclaimed for his formative influence on the genre – Star Trek is a point that can be measured where science-fiction matured from bug-eyed monsters of 1950s cinema into a much more thoughtful confrontation with the unknown where Roddenberry showed that sometimes the problem with meeting the alien was more one of humanity’s own prejudices and fears. A more dubious aspect of Star Trek was its social utopianism, where it seemed that every second week the show would create some straw society that would then be dismantled by Captain Kirk and the virtues of freedom and democracy upheld as the best of all possible worlds.

Underneath the fan hagiography that surrounded him, Roddenberry tended to be a heavy-handed polemicist and most of the episodes he personally wrote were little more than sermonising social diatribes – Miri (planet of children), The Return of the Archons (machine-ruled society), Bread and Circuses (a planet based on Ancient Rome), A Private Little War (an allegory about intervention in Vietnam), The Omega Glory (planet where the Yangs and Koms rule and Captain Kirk wins the day by reciting the Declaration of Independence) and The Savage Curtain (where Abraham Lincoln joins the Enterprise crew in battling some of the great villains of history).

Outside of Star Trek, Gene Roddenberry’s career was somewhat shakier. During the 1970s, Roddenberry made a number of attempts to create other tv series, including creating the excellent The Questor Tapes (1974) about an android searching for its origins and Spectre (1977) about occult investigators, neither of which went any further than a pilot. He also wrote/produced one film, the very strange and now laughably dated Pretty Maids All in a Row (1971) about sex and murder in a high school.

The one Roddenberry idea that seemed the nearest to ever making it beyond a pilot was Genesis II, which would have centred around the character of Dylan Hunt, a NASA scientist from the 20th Century who is revived from cryogenic suspension in the 22nd Century by PAX, a scientific enclave that travels the world in shuttle trains attempting to bring together the disparate post-holocaust societies and rebuild the world. The idea first got off the ground with a tv pilot Genesis II (1973), featuring Alex Cord as Hunt who is awoken and engages in a battle against mutant tyrants.

Planet Earth was a direct sequel. (Planet Earth is frequently described as a remake of Genesis II, largely by people who have never seen it and then go on to describe scenes where Hunt is revived from cryogenic suspension, which do not occur in the film). The film reuses the subshuttle sets from Genesis II but the part of Dylan Hunt is recast with John Saxon. Planet Earth was followed by a further PAX tv movie, Strange New World (1975), which was actually comprised of two episodes that were shot for the proposed tv series that never ended up being made. (To add to the confusion, Strange New World was made with John Saxon but without Gene Roddenberry’s involvement where it gives the character a different name and tells a completely different origin story of how he arrives in the future).

Planet Earth tends to represent Gene Roddenberry at his preachy worst. Genesis II, when it came down to it, was only a variant on the basic premise of Buck Rogers (1939) about a man from the present-day waking up in the future and showing people how things should be done with a little 20th Century knowhow and individualism. That is to say, Genesis II was a Buck Rogers with Gene Roddenberry’s social utopianism added to the mix. The various stories of Genesis II that did end up being made seemed to offer up yet more variants on the Society of the Week diatribes of Star Trek – they were stories designed to highlight straw societies that were held up as an object lesson to show how American society right there and then was the best of all possible worlds.

Alas, while the Society of the Week model became all the in-thing in almost every science fiction series made after Star Trek, Planet Earth has not dated well. Clearly, it was made at a time when the Women’s Lib movement was just gathering steam – “Women’s Lib or Women’s Lib gone mad?” John Saxon wonders on the way to the community. Today the concept seems laughably out-of-date, down around the level of outer space sex fantasies of the 1950s like Abbott and Costello Go to Mars (1953), Cat Women of the Moon (1953) and Queen of Outer Space (1958) where astronauts encounter all-women planets and show them the error of their ways with a little old-fashion lovin’. The scenes with John Saxon getting Diana Muldaur drunk and seducing her are essentially a variant of Captain Kirk as playboy of the future. With the various scenes of men being tied up and whipped and Diana Muldaur’s marvellously haughty and authoritative performance, you suspect that the film was servicing somebody’s idea of a sexual fantasy – the men are even referred to as Dinks. Nowadays, the film has a certain amusement value and has even been celebrated as a cult classic by some people who love its idea of a femdom fantasy. Certainly, the silliness makes it a more watchable film than the more ponderous Genesis II was.

Even by the 1970s, stories about ugly-faced mutants running around the post-holocaust landscape in German stahlhelm helmets and speaking in pidgin English were regarded as a thing of the past. The rest of the show’s organised revolutions and urgent countdowns to save someone’s life is the stock dramatics of tv science-fiction of the era. The film is probably better budgeted than the average episode of Star Trek, although the sets and costumes are still the standard pastels and stock studio warehouse interiors that Star Trek used. It’s just that, try as it might, Planet Earth never escapes the sense of being a glorified 1950s B movie. To his credit, Gene Roddenberry later disavowed the story and claimed that the all-women society idea was one that was forced onto him by the network.

Gene Roddenberry had no luck in getting Genesis II off the ground as a series. Indeed, he had little luck at all subsequent to Star Trek. He was instrumental in getting Star Trek back off the ground again with a cinematic revival – Star Trek – The Motion Picture (1979), which was actually based on an unused script written for the proposed Genesis II series – but that ran wildly over budget and failed to recoup its cost. Roddenberry was blamed for the film’s financial loss and shut out from involvement on all the subsequent Star Trek films. He did make a return to series television with Star Trek: The Next Generation (1987-94), however the first three seasons ended up being a revolving door of dissatisfied creative talent and it was not until Roddenberry was shut out of the process there too that the show began to grow into its own.

Roddenberry died in 1991. He has had the peculiar distinction of having inspired more tv series following his death than when he was alive. There have been a further  Star Trek series, Star Trek: Deep Space Nine (1992-9), Star Trek: Voyager (1995-2001), Enterprise (2001-5), Star Trek: Discovery (2017– ), Star Trek: Picard (2020- ) and the animated Star Trek: Lower Decks (2020- ) – and a series based on an original idea he came up with, the lacklustre Earth: Final Conflict (1997-2002). The most interesting of these was the series Andromeda (2000-5). This was a reworking of the basic idea of Genesis II – but transplanted from post-holocaust Earth to an intergalactic setting. Kevin Sorbo was cast as Dylan Hunt, who was now rewritten as the captain of a starship who wakes up after his ship pass through a black hole to find the universe splintered into disparate societies, which he and his crew then set about to unite again.