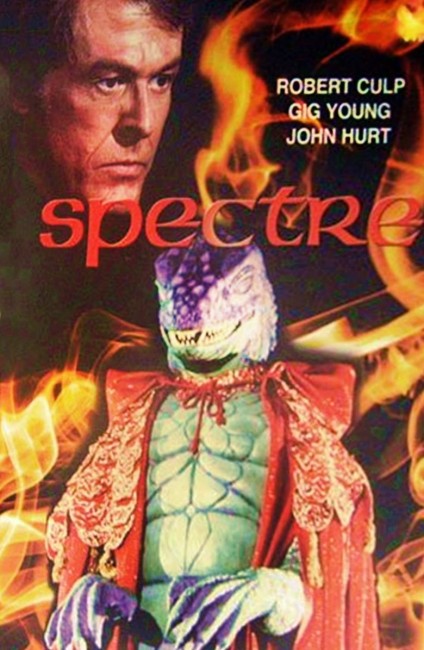 Dr Hamilton answers a call from his old friend, the criminologist William Sebastian. He learns that Sebastian has abandoned criminology and started to investigate the occult – although this has resulted in Sebastian’s heart having been stolen during an encounter with demonic forces. Sebastian and Hamilton are asked to come to the UK by Anitra Cyon to investigate her brother Geoffrey’s strange behaviour, which she believes to be due to demonic influence. In England, they uncover an occult conspiracy and discover that Geoffrey has unearthed an ancient megalithic site and raised up the demon Asmodeus.

Spectre was a tv pilot from Gene Roddenberry. Gene Roddenberry of course was the creator of tv’s Star Trek (1966-9) and became a revered figure in genre fandom. Subsequent to Star Trek, Roddenberry tried to launch several other shows with little success. He produced/wrote one film, the bizarre sex thriller Pretty Maids All in a Row (1971) and several tv pilots, including The Questor Tapes (1974) and most successfully Genesis II (1973) and its sequel Planet Earth (1974), as well as Spectre. However, none of these ever went beyond pilots to become tv series. It was not until Roddenberry revisited the Star Trek franchise with the cinematic Star Trek – The Motion Picture (1979) and then the tv series Star Trek: The Next Generation (1987-94) that he began to regain some of his standing. In both cases though, he was unceremoniously dumped from control of the franchise by Paramount. Roddenberry co-wrote Spectre with Samuel A. Peeples, who had also written Where No Man Has Gone Before (1966), the second pilot episode for the original Star Trek.

Spectre came at the tail end of a cycle of occult films in the 1970s that had been created by huge hits like Rosemary’s Baby (1968), The Exorcist (1973) and The Omen (1976). There were a great many copycat films and on tv, albeit more watered down than their cinematic counterparts. Amid this, there was also a micro-fad for occult investigator films with the likes of Daughter of the Mind (1969), The Norliss Tapes (1973) and most successfully The Night Stalker (1972), its follow-up The Night Strangler (1973) and the subsequent tv series Kolchak: The Night Stalker (1974-5). Although what one suspects inspired Gene Roddenberry here was Hammer’s Dennis Wheatley adaptation The Devil Rides Out/The Devil’s Bride (1968), which Spectre has a good many similarities to, not the least of which is the similarities between the central occult investigator savants of Robert Culp’s William Sebastian and Christopher Lee’s Duc de Richlieu.

With Spectre (as indeed with all of his other tv pilots), one thinks that Gene Roddenberry had the makings of a potentially worthwhile tv series had the pilot ever been picked up. Here Roddenberry at least comes up with an interesting sub-Dennis Wheatley story. Clive Donner directs several memorable moments – Ann Bell being revealed as a succubus in Robert Culp’s office; the appearance of a demon-like figure as Culp and Gig Young huddle in a protective pentacle in an apartment (a scene that reminds strongly of the climax of The Devil Rides Out). The scene that most people remember is the climactic occult orgy and the appearance of the demon, which looks like a green lizard dressed in a scarlet cape. (For cinematic release in some parts of Europe, extra softcore nudity was added to these scenes and remain in most of the versions of Spectre circulating in tv reruns today).

Roddenberry has clearly drawn upon the classic duo of Sherlock Holmes and Dr Watson for the characters of Sebastian and Dr Hamilton. The characters come with some interestingly original spins – Robert Culp’s Sebastian is someone who has had a piece of his heart removed by occultists and keeps collapsing periodically, while Gig Young’s Dr Hamilton is struggling with an alcohol problem. Robert Culp in particular gives a nicely authoritative performance that carries much of the film. On the other hand, Gig Young, a supporting actor from the 1940s, is stolid. (Young committed suicide just after the film, making Spectre his second-to-last screen appearance).

There are some interesting actors around in other smaller parts. James Villiers, a stalwart of the British acting industry, makes for a typically supercilious British upper-class type. A young John Hurt plays his younger brother; while Majel Barrett, Gene Roddenberry’s wife, best known as Nurse Chapel in Star Trek and Lwaxana Troi in The Next Generation, plays Robert Culp’s housekeeper who is also a witch.