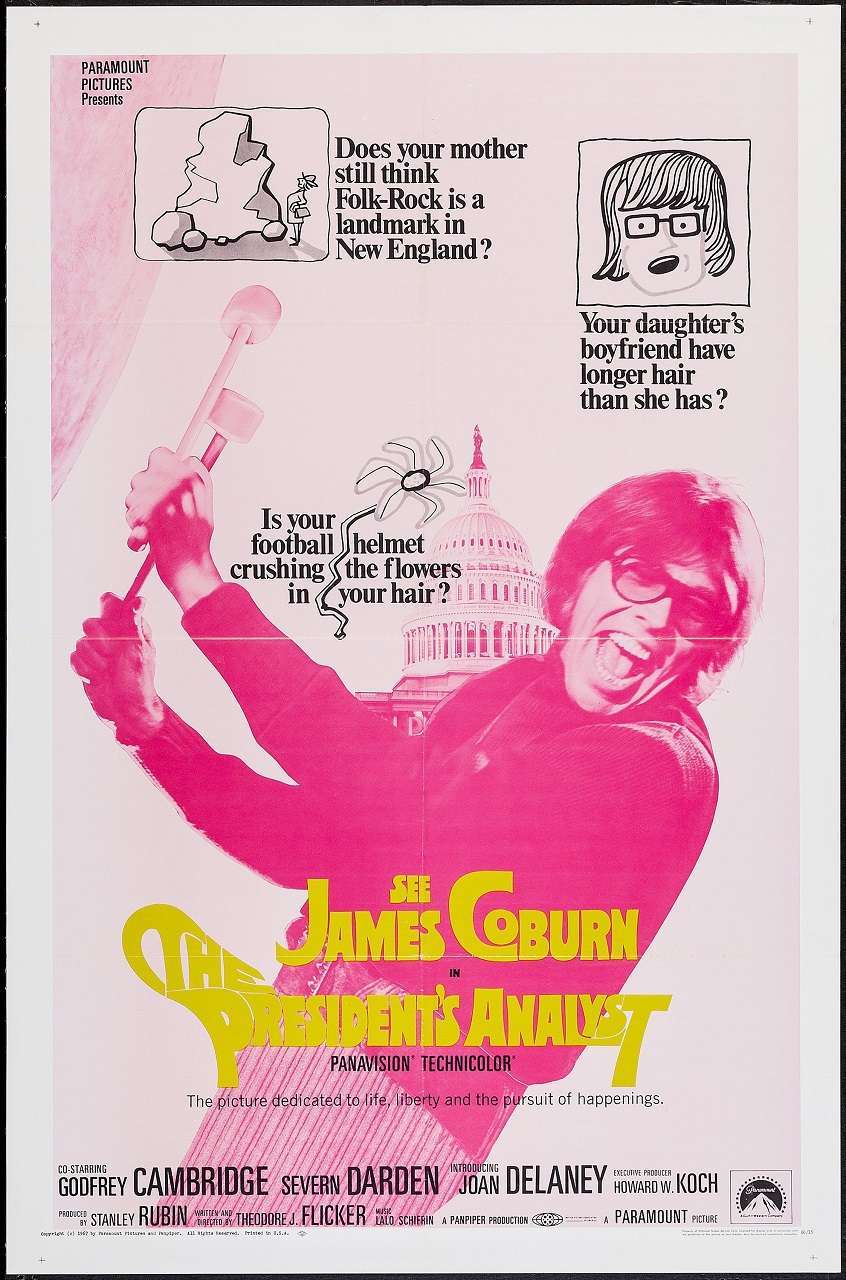 Psychoanalyst Sidney Schaefer is selected by the Secret Service as a suitable candidate to become therapist to The President. However, once installed in Washington, Sidney is driven crazy by the obsession with security – the Secret Service refuse to allow him to spend the night with his girlfriend lest he talk in his sleep and give away state secrets. Unable to take the paranoia anymore, Sidney decides to run away. On the run, he is pursued by every international spy agency who all want to obtain the information in his head, by his own side who want to liquidate him as a security risk, and finally by the Telephone Company who want to enlist him in their scheme to implant micro-sized telephones inside the nation’s head.

The President’s Analyst was one of the better among the horde of mostly silly spy films that came out in the 1960s exploiting the success of the James Bond films. Where most of the other films played out a maximum of playboy innuendo and Swinging 60s giddiness, The President’s Analyst is one of the few among the spy fad that amounted to a sharp and biting satire of Cold War politics. (Star James Coburn had earlier also appeared in one of the more amusing of the silly Bond film copies – Our Man Flint (1966) and its sequel).

The film’s satire veers unevenly between the inspired and the silly. The initial paranoia scenes go on too long and the hippie interlude is dated and even a little sentimental today. The slightly bittersweet sequence where James Coburn analyses the childhood of Russian spy Severn Darden is too protracted and goes against the rest of the film’s grain. For the most part though, The President’s Analyst succeeds.

There are many funny sequences that have an appealing bite – like those with the militant suburban liberal Quantrills – “We’ll disarm when the conservatives disarm” – and the end scenes with the Telephone Company and their particularly believable plans for implanting neural telephones (something that seems to have come close to unnervingly real post the revelations of Edward Snowden and the NSA or of companies like Google and Facebook tracking cellular communications). Director Theodore J. Flicker throws in one fabulously funny visual sequence where James Coburn and Jill Banner make out in a field, their position only designated by balloons above the grass, while unnoticed around them a whole ring of spies skulk and eliminate one another.

Director-writer Theodore J. Flicker is a filmmaker who should have had a greater career than he did. Flicker worked sporadically in television and his only other films of note are the revenge black comedy Up in the Cellar (1970) and the children’s fantasy film Jacob Two-Two and the Hooded Fang (1979).