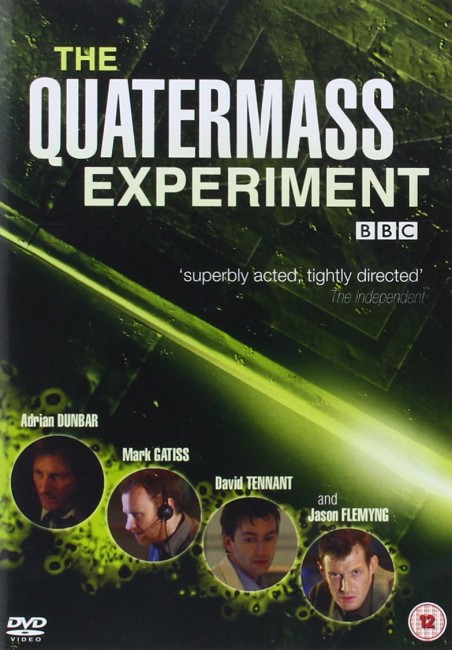 The British Experimental Rocketry Group headed by Professor Quatermass has put a privately funded rocket expedition into orbit. However, something has gone wrong and all communication has been lost with the ship. The rocket then suddenly comes back into contact and they are able to bring it to a safe landing. When Quatermass and his team rush to the site, they find only a single astronaut, Victor Carroon, in the capsule. The other two astronauts that were on board have mysteriously disappeared and Quatermass and his team are baffled as to how or where they went. Carroon is delirious and ill. In trying to discover what happened, Quatermass and the others are startled when Carroon starts speaking in German. They realise that he has somehow managed to absorb the consciousness of the expedition’s German engineer Ludwig Reichenhein. Carroon makes an escape from the hospital as Quatermass realises that his body has been taken over by an alien force that absorbs other lifeforms into its biological mass, including the missing crewmates and a cactus in the hospital. As Carroon heads across London, they realise that the creature is about to replicate and that, unless stopped, it is capable of taking over the entire planet within a matter of hours.

The Quatermass Experiment (1953), written by Nigel Kneale, is one of the classics of British science-fiction television. The serial was originally broadcast live in six weekly half-hour episodes and was a huge hit, where it developed the reputation among audiences of the day as something extremely scary. Nigel Kneale and the BBC made two sequels Quatermass II (1955) and Quatermass and the Pit (1958-9), which both also aired as live tv plays. The success of the tv serials was such that the rights were brought up by Hammer Films, a couple of years before Hammer would create a revolution in British horror with their versions of Frankenstein and Dracula. Hammer made three theatrical Quatermass films – The Quatermass Xperiment/The Creeping Unknown (1955), Quatermass 2/The Enemy from Space (1957) and Quatermass and the Pit/Five Million Years to Earth (1967), which enjoyed much success. Kneale also later wrote a belated follow-up Quatermass/The Quatermass Conclusion (1979), which was screened as both a tv serial and a theatrical release.

The Quatermass Experiment/Xperiment was mentioned as a possible cinematic remake throughout the 1990s. Such plans never amounted to anything though until this revival by the BBC. The Quatermass Experiment 2005 is essentially a reworked version of the original 1953 serial, although it has been condensed from a three-hour running time to a single 97-minute broadcast. Nigel Kneale, who was in his eighties (and died the following year), does not write the script this time but was closely consulted on the changes made.

Some elements of the story have been eliminated and others changed, most notably those involving enemy agents attempting to abduct Carroon, as well as the location of the climax, which goes from a landmark like Westminster Abbey to the Tate Modern gallery (the former Bankside Power Station). (If anything, the script for Quatermass Experiment 2005 adheres more closely to the Hammer film version than it does to the original tv serial).

The other notable aspect is that the remake is also a live tv broadcast as the original 1953 tv version was. This falls into a fad for live broadcasts of tv shows that has emerged in recent years, where series like ER, The Bill, Coronation Street, Will and Grace and The West Wing have conducted the gimmick of broadcasting live episodes, as well as the remake of Fail Safe (2000).

The live broadcast is conducted surprisingly well. In fact, watching the film (alas not live), it would be impossible to tell that it had been shot live did one not know that that was the case. In retrospect, you can see that the show has had to resort to various tricks to allow scene transitions or for the cast to have a breather – cutting to set-ups with other actors, flashbacks to film footage of the training for the mission and aboard the rocketship, cuts to soundbites from BBC news reporters or panoramas of London. Occasionally there are pieces that seem contrived – like the move from the press conference to the hospital, which is improbably located in the room just behind. The cast reportedly often had something like only 90 seconds to move from one location to the other and the results are remarkable considering the logistics required.

The original 1953 broadcasts were much more primitive than today – they came only a few years after the beginning of commercial tv broadcasts – and with technical advances that have occurred in the interim, colour for one, the remake is a much more sophisticated production. It is to the show’s considerable credit that, despite the enormous limitations provided by the live environment, it still manages to maintain a degree of suspense, particularly during the scenes of Carroon’s transformation and the sinister looks Andrew Tiernan keeps giving behind Indira Varma’s back.

The pace is well sustained throughout. There are some particularly good supporting performances from the likes of Indira Varma, The League of Gentleman’s Mark Gatiss and Adrian Bower, not to mention later to be Doctor Who (1963-89, 2005- ) David Tennant cast as a doctor. These become even more impressive when one considers that these are performances given live, where the director does not have the option of choosing the best of several shots and that the considerable subtlety of reactions have all been conducted in one lengthy take.

The role of Quatermass has been recast with Jason Flemyng (who is incidentally the son of the director of the two Doctor Who theatrical movies). It takes a little getting used to Flemyng as Quatermass. For one, all the other actors to have essayed the role of Quatermass have been in their late forties and fifties – the youngest to play the role was Quatermass and the Pit 67‘s Andrew Keir who was 41 at the time. Jason Flemyng is aged 39, although looks only around 30. This serves to give the role of Quatermass a different spin than it has traditionally had. Other actors in the part such as Keir, Andre Morell, Reginald Tate and John Robinson played Quatermass as a sharp-witted, no nonsense genius who has an instinctive understanding of the threats facing the world. In the first two Hammer films, Brian Donlevy gave us a Quatermass who was bullish and arrogant and in the 1979 serial John Mills played Quatermass as a frightened old man, nevertheless one who still had his wits about him. Jason Flemyng’s Quatermass lacks the authoritative decisiveness of the previous actors in the role. We do see the urgency and indecision play out in him and Flemyng’s performance comes to the fore with considerable strength during the climactic scenes but ultimately he seems more a team player who patiently listens to the advice given him and decides the best he can, rather than someone who can save the world (literally) by the power of reason.

On the minus side, despite some promisingly creepy moments in the hospital, Hammer’s The Quatermass Xperiment still has the more effective edge during the middle and end sections. The remake fails to sustain it once the action gets out of doors. The scenes where Carroon encounters the kid, where he breaks into the pharmacy and where the couple on the South Bank see something in the water feel like padding and never generate anything eerie and spooky. The filmmakers also make the choice not to show the monster this time – just like in Nigel Kneale’s famous tv series Beasts (1976). However, this does not fully work. One is tempted to say that the remake is being a little too faithful to the primitive economies of the original – but in fact the original Quatermass Experiment broadcast did show a monster – it consisted of a glove covered with foliage moving in front of a photographic blow-up of the interior of Westminster Abbey.

Certainly, an unseen monster is something that could be gotten away with in the 1950s but becomes frustratingly unsatisfactory here. Especially when in its place we get scenes such as Mark Gatiss entering into the power station all lit up in nightlight green but never see what he does, or Jason Flemyng’s entrance where he is essentially imploring to an empty stage. These scenes with Flemyng pleading to an empty stage, all lit up in a spot, and with the three men reappearing is highly effective, all the more so for the superb lighting effects that are conducted within the live environment. However, such an ending only seems tame when compared to most of today’s monster movies. Especially when the film raises the urgency of a menace that is capable of destroying the world in a matter of hours, the lack of provision of any visible manifestation of the threat seems akin to sitting down to a meal in a steakhouse and only being served a light salad.