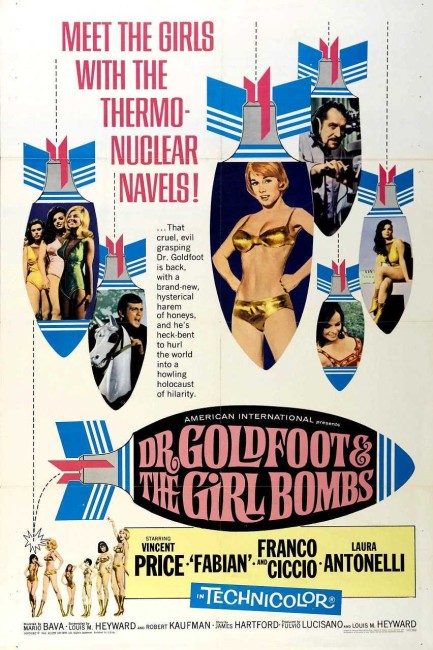 Security Intelligence Command agent Bill Dexter encounters Dr Goldfoot in Rome. Dr Goldfoot is sending out his new army of female androids, which have bombs built inside them, to seduce and blow up NATO generals. Joined by two bumbling Italian SIC agents, Franco and Cicchio, Bill tries to stop Goldfoot dropping the hydrogen bomb on Russia.

This was a sequel to Dr Goldfoot and the Bikini Machine (1965). Dr Goldfoot and the Bikini Machine was a campily silly spoof of spy films featuring Vincent Price that sent up mad scientists and his roles in AIP’s Edgar Allan Poe films. This sequel, made a year later, brought back Vincent Price but moved everything else to Italy.

Dr Goldfoot and the Girl Bombs was directed by Mario Bava. Bava was one of the finest genre directors in continental cinema, having made classic horror films like Black Sunday (1960) and Black Sabbath (1963). This was one of a handful Mario Bava’s non-horror films – and by consensus is Bava’s worst. Bava displayed a sublimely droll sense of humour with the next year’s Danger: Diabolik (1967), one of his best works, but Dr Goldfoot and the Girl Bombs goes disastrously wrong.

Chief among the disasters is the film’s focus around the idiotic clowning of Franco Franchi and Ciccio Ingrassia, two talentless but popular Italian comics of the 1960s – they’re like an inept Abbott and Costello – whose antics are made even worse by the drearily flat dubbing. While the first Dr Goldfoot film was campily silly, this degenerates to infantile buffoonery.

The film is certainly more lavishly produced than Bikini Machine. Mario Bava obtains the tone of camp surreal silliness that the first film aimed at visually but was too pedestrian to ever achieve. Vincent Price often addresses the camera direct and there is a certain surrealism to the spy gags – a bathroom carpet hides a trapdoor, periscopes poke out of trashcans and under conference room tables.

Like the first film, this climaxes on an extended chase sequence where Bava goes totally gonzo with cars crashing into the Coliseum, the characters running around a merry-go-round and an amusement park, taking off in hot-air balloons and encountering angels as they pass through the clouds, a fight aboard Air Force One with fire extinguishers, ending in a spoof of Dr Strangelove or, How I Learned to Stop Worrying the Love the Bomb (1964) with Francho and Ciccio riding a nuclear warhead down to its target, all scored with jaunty silent movie music and title cards in lieu of dialogue.

Mario Bava’s other genre films are:- uncredited co-direction of Riccardo Freda’s I Vampiri (1957) and Caltiki the Immortal Monster (1959); the Gothic classic Black Sunday/The Mask of the Demon/The Revenge of the Vampire Woman (1960); the Greek muscleman fantasy Hercules in the Center of the Earth/Hercules vs the Vampires (1961); the giallo The Evil Eye (1962); the Gothic horror anthology Black Sabbath (1963); the Gothic horror Night is the Phantom/The Whip and the Body/What? (1963); the giallo Blood and Black Lace (1964) the Gothic Kill Baby … Kill/Curse of the Dead/Curse of the Living Dead/Operation Fear (1965); the sf/horror film Planet of the Vampires (1965); the masked super-thief film Danger Diabolik (1967); the giallo Five Dolls for an August Moon (1970); the giallo Hatchet for a Honeymoon/Blood Brides (1971); the giallo Twitch of the Death Nerve/Bloodbath/A Bay of Blood/Carnage/Ecology for a Crime (1971); the Gothic Baron Blood (1972); the giallo/haunted house film Lisa and the Devil/House of Exorcism (1972); and the possession film Schock/Beyond the Door II (1977).