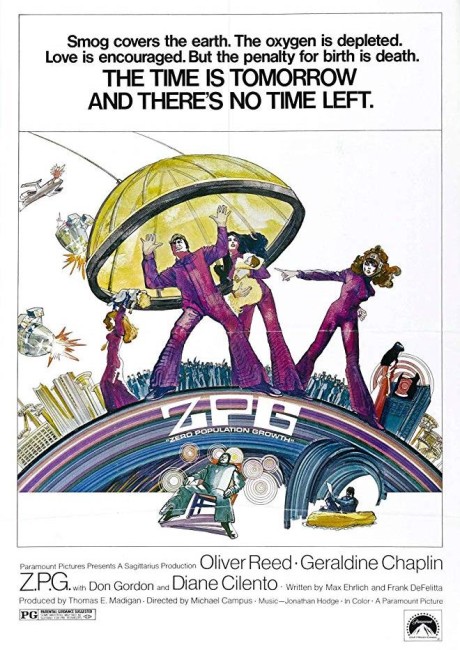 In the future, the world is severely polluted, food comes in a tube, and animals and plants are extinct things of the past. All the nations of the world agree to the Zero Growth Edict where people are forbidden to have children for the next thirty years. Those that break the law are arrested and they and the child publicly executed in asphyxiation domes. People are given lifelike dolls and encouraged to regard them as substitute children. Husband and wife Russ and Carol McNeil work at a museum where they playact the roles of 20th Century couples for curious onlookers. Carol becomes obsessed with having a child and makes the decision not to use the home abortion machine after they have sex. She is forced to hide the pregnancy and subsequently the existence of baby. When this is discovered by neighbours George and Edna Borden, they at first agree to help hide the baby but soon want to share and then have control of it.

I first learned of Z.P.G. (Zero Population Growth) in John Brosnan’s science-fiction cinema book Future Tense (1978). Brosnan, a perpetual nitpicker and cynic, was dismissive of the film – in particular, because of the inaccuracy of the title. Zero Population Growth is a term derived from the nightmare predictions about world overpopulation in Paul R. Elrlich’s book The Population Bomb (1968) and refers to the theory that population be not allowed to grow beyond its current size ie. couples can only have enough children to take their place. Brosnan points out that the title more accurately should have been just Zero Population (although I would quibble with this, all that has happened is that a thirty-year moratorium has been placed on new births). What I found more credulous about the film was the basic premise – that all the nations of the world would readily agree to ban childbirth and execute those who do, or that people would be so psychologically desperate for children in their lives that they would accept lifelike dolls as substitutes.

I had sought Z.P.G. (Zero Population Growth) out for years so it is a surprise after seeing it that it proves a halfway good science-fiction film. It does what a good work of science-fiction should and throws us into a world where familiar things are different – the exterior scenes come under a heavy cloud of smog where everybody wears gas masks; people sit down in restaurants to meals squeezed out of a tube and are constantly complaining about the taste; there are riots in the restaurant after Geraldine Chaplin produces some real vegetables.

Particularly good is the scene where we visit the museum where there are stuffed exhibits of extinct animals like cats, dogs and chickens; where a video wall lists criminals of the 20th Century that include industrialists and The Pope; where people are able to view archaic concepts like filling a car with gas; and where Oliver Reed and Geraldine Chaplin, along with neighbours Diane Cilento and Don Gordon, perform the ritual of a family in an ordinary domestic setting. (One of the more adventurous aspects of the film is that there is the implied sense that in this future the idea of monogamous relationships is a thing of the past and that Oliver Reed, Geraldine Chaplin and neighbours seem to exist in an extended foursome). In another scene, we see people in a theatre watching a documentary where ordinary scenes (to us) of a picnic, a Sunday roast and dining in a restaurant are regarded as horrific and symptoms of a society that was drunk on its own wastage. The essence of good science-fiction is being able to take familiar things and turn them on their head and as such Z.P.G (Zero Population Growth) does an exemplary job of fleshing out such a future.

One of the more fascinating ideas is seeing the people react with wall-sized tv screens in their living rooms. This is something that surely prefigures many concepts that came with the advent of the internet. We see fascinating scenes where people react to psychologists on the tv screens where their fears are coaxed with words that often feel less therapeutic than hypnotic, as all the while the wall patterns behind the psychologist pulse with soothing lights. Another fascinating facet is where we have salespeople who demonstrate and try to sell items direct to the individual viewer via the tv screen – an idea one is surprised the shopping channel hasn’t hit onto yet.

The production designers conduct a good variation on the antiseptic white and gleaming chromium look that was considered the designated look of nightmare futures for a few years after the release of 2001: A Space Odyssey (1968). The overpopulation theme was a prevalent one among a number of films of this era that imagined futures that required drastic measures to curb population growth – see the likes of The Last Child (1971), THX 1138 (1971), Soylent Green (1973) and Logan’s Run (1976). Here it feels as though the filmmakers here have taken nightmare speculations about population growth from authors like Paul Ehrlich (no apparent relation to screenwriter Max Ehrlich) and combined it with the new Sexual Revolution offered in the 1960s by The Pill and blown it up to dystopian proportions. Within this, the film develops its premise and standard theme of rebels/lovers defying a dystopian society out quite well. Particularly good are some of the twists when the neighbours discover the baby and immediately become so covetous they want to share it and then start trying to take it as theirs.

Some of the abovementioned scenarios suffer from mixed moral messages. In Soylent Green, we had a society that was so overpopulated it was having to feed on its dead. The climax featured Charlton Heston making this horrific discovery but you wondered if that was all there was to eat, then was it not an empty protest? Similarly here, we are given the idea of a polluted and overpopulated world where the authorities have had to introduce draconian measures to prevent people from continuing to breed. While acting horrified that this could happen, the film’s solution seems to be to have its couple breed in defiance, where you cannot help but think that, though this is protesting against the dictates of a cruel system, doing so is only adding to the problem that created this society in the first place. Equally, when Oliver Reed and Geraldine Chaplin make their escape by life raft through the sewers to an abandoned missile site, you can only wonder if this amounts to a victory, for where could there possibly be to escape to in this overpopulated and polluted world?