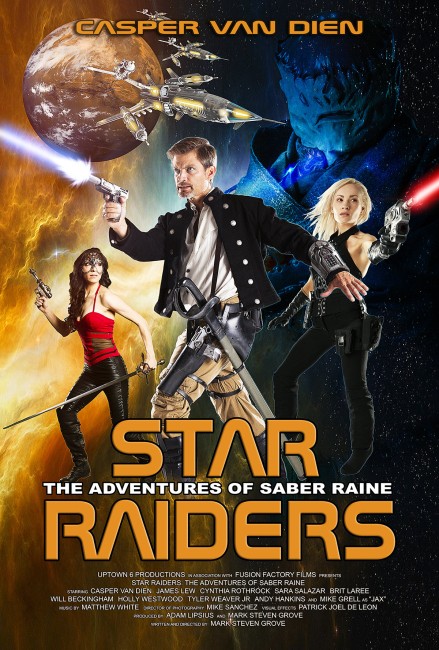 A unit of Cavaliers land on the planet Goros Prime in search of Prince Tyr and Princess Caliope, the heirs of their planet Arisia who have been abducted. The Cavaliers encounter the mercenary Saber Raine who is wanted by Earth government for turning against his own side. Raine aids them in dealing with the perils of the planet. Tyr and Caliope are being held by the Gorosian warlord Sinjin but Caliope switches sides to join Sinjin, wanting the secrets of Arisia’s all-powerful Monostone for herself.

Star Raiders: The Adventures of Saber Raine was the sixth directorial outing from Denver-based filmmaker Mark Steven Grove. Grove has also made Dragon and the Hawk (2001), The Shadow Walkers (2006), Legacy of the Tengu (2014), Mind’s Eye (2016) and the subsequent Gathering of Heroes: Legend of the Seven Swords (2018). In between his directorial outings, Grove also works as a stuntman and special effects supervisor.

With Star Raiders, Mark Steven Grove is making a planetary adventure. This is a genre that closely resembles the space opera of Star Wars (1977) et al but keeps its adventures restricted to the location of an alien world as the heroes travel across it, encountering various aliens, monsters and so on. It is, if you like, a genre that falls halfway between space opera and epic fantasy. The best known examples are probably Flash Gordon (1936) and sequels or John Carter (2012).

Mark Steven Grove is clearly operating on a reduced budget. The alien planet never gets too more exotic than Grove and co having shot in parklands and open area presumably near where they live. There’s none of the strangely coloured skies or mediaeval throne rooms that you usually get in these productions – these are limited to a couple of opticals of Sinjin’s castle and a moon in the sky.

That said, the film is one where those involved are clearly making an effort. It is also one where said effort runs up against the brick wall of lack of resources. This could have been a much better film even if it had the budget of a regular Hollywood B movie. As it is, Grove and co put a great deal of effort into the costuming, props and makeups. Sinjin removes his helmet to reveal a rather cool looking pulsing red brain that takes up half his head, while some of the costumes, especially the outfit that Sara N. Salazar adopts when she goes over to the dark side, look impressive.

The film’s one ace in the hole proves to be Casper Van Dien, a regular B movie actor over the last two decades. Van Dien has just the right quality of solid leading man handsomeness and heroic certainty that you could easily see him inheriting the roles that Harrison Ford used to be offered. He gives the part of Saber Raine just what it needs such that you could easily see the character being spun off into a further series of adventures.