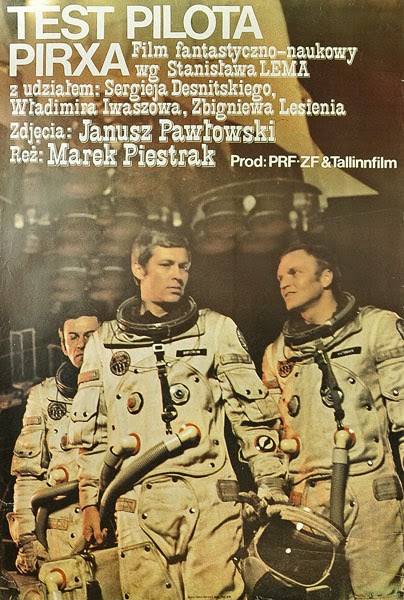 The celebrated space pilot Commander Pirx is chosen for a top-secret space mission. He learns that he is to command a crew of five others. Some among the crew are non-linears – androids that are indistinguishable from humans in all ways – although he is not told who is human and who is machine. It will be his mission to evaluate and report on how they perform for potential use in future space missions. The mission is launched. Soon after, one of the crew reveals that he is a human, while another reveals that he has discovered he is one of the non-linears. Pirx tries to guess which of the other crew are androids. One of the non-linears then sends Pirx a taunting message and announces that it is going to sabotage the mission in order to protect its own uniqueness. Pirx desperately tries to think to a way to use human weakness to outwit the non-linear’s superior abilities.

Test Pilot Pirx is a film based the character of the spaceship pilot Pirx created by Polish science-fiction writer Stanislaw Lem. Pirx appeared in Lem’s short story collection Tales of Pirx the Pilot (1968), which are translated into English in four volumes. The film is based on one of these short stories, which is known as The Inquest in the English-translated version. Stanislaw Lem is best known as the author of Solaris (1961), which was filmed as the classic Solaris (1972) and Steven Soderbergh’s remake Solaris (2002). (See below for other adaptations of the works of Stanislaw Lem).

The film starts out seeming like a typical Eastern bloc science-fiction film of the Soviet era. These tended to be dull and talky and filled with stocky cutout characters that existed more as ideological mouthpieces than as characters. True to form, the early sections of the film are slow and talk their ideas out. These are also padded out with boiler-plate action sequences in which a rival corporation uses a remote-controlled truck to try and kill Pirx, which feels exactly like filler, especially in that the evil corporation have nothing to do with the rest of the story.

However, the film becomes far more interesting once the bulk of its story kicks in – indeed, here it becomes a conceptual science-fiction story somewhat akin to the works of Philip K. Dick. Once the mission is launched, the film turns into a fascinating chamber drama centred around the question of who aboard is and isn’t an android. One of the crew comes forward to confess that they are human and another to tell an appealing little story about how they exposed their wires after cutting themselves in an operating room and realised they were an android (although if it were this easy to tell, one wonders why the question of who is and isn’t machine is not simply determined with an x-ray or a scalpel). The film becomes even more fascinating when one of the androids aboard announces that it plans to sabotage the mission.

A Western film would perhaps have drawn these scenes out more, whereas the film here abruptly cuts to a trial and tells everything that happened in flashback. Also the android megalomaniac ends up being exactly who we suspect it is with no twists or any effort to make a classic whodunnit out of it. Nevertheless, the film picks up from a slow first half-hour and becomes not too bad science-fiction by the point it arrives at its end.

The special effects are variable – not as bad as say Italian space operas of the 1960s/70s, more the equivalent of a tv show around that period. The traversal of the Cassini Gap is one decent sequence. The sets are very good – the spaceship is built as a single set of multiple corridors and has the feel just as though one was there.

Interestingly, the film comes with the display of a number of Western companies – most notably a visit to a McDonalds at one point – while all the signs are written in English. One suspects that the filmmakers had half an eye to the big late 1970s science-fiction boom and were seeking to create something that could be carried to the West, as Solaris had. Alas, such was not the case and Test Pilot Pirx, outside of the odd fantastic festival screening, languished in European release.

If nothing else, this is one science-fiction film more than any other than has predicted a coming trend in space travel – that it will be conducted by robots rather than humans. Although here the film is slightly out in assuming that the robots would have to be humanoid androids, as opposed to the far more practical mechanical variety.