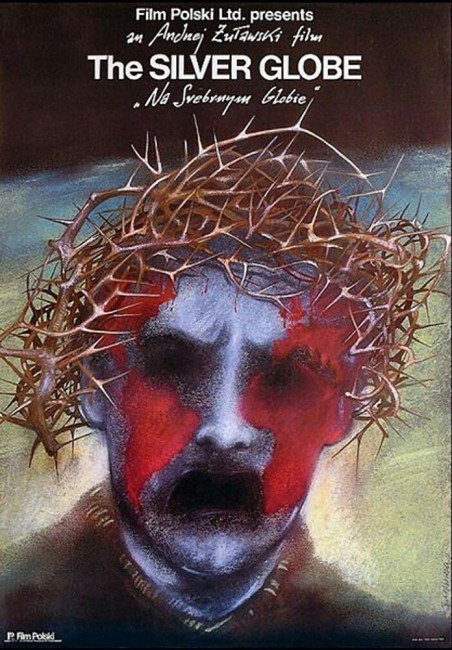 A group of astronauts from Earth land on an alien world and set out to explore it. The woman among the party gives birth and the child grows rapidly. The astronauts die of a combination of madness and the harsh conditions on the planet. Soon a colony of native-born grows up around the lone survivor. Some years later, Marek, an astronaut from Earth, comes to the planet to find what has happened to the first expedition. He is seeking escape from the hurt of a relationship break-up. On the planet, he finds that the descendants of the astronauts have grown up into a savage people with a religion that looks forward to the return of the astronauts. Hailed as a god, he becomes caught up in making peace between the descendants of the astronauts and the human-bird crossbreeds known as Sherms.

Poland’s Andrzej Zulawski (1940-2016) was director-writer who has created a body of work that has enjoyed consistent arthouse acclaim, although much of it remains obscure and difficult to obtain. His second film The Devil (1972), a savage and brutal historical drama, gained attention after being banned in Poland under the Communist regime. Zulawski went onto the critically acclaimed The Important Thing is to Love (1975) and then the surreal horror film Possession (1981), which was also banned in some countries but has developed a cult reputation. Zulawski made a number of other works since including Mad Love (1985), My Nights Are More Beautiful Than Your Days (1989), Boris Godunov (1989), Fidelity (2000) and Cosmos (2015), as well as wrote several novels, although for many years was still a director whose name lurked under the radar rather than enjoyed the acclaim of fellow country people like Agnieszka Holland, Krzysztof Kieslowski or Andrzej Wajda.

Most people know Andrzej Zulawski for Possession, while his other output has only sporadically trickled through to Western shores. Among this, On the Silver Globe has been one of his most troubled and obscure productions. Zulawski shot the film between 1976 and 1978. It was an adaptation of The Lunar Trilogy, a series of books that consist of On the Silver Globe (1903), The Conqueror/The Victor (1910) and The Old Earth (1911), written by his great-uncle Jerzy Zulawski. The Lunar Trilogy is a classic of Polish science-fiction, although is little known in the West. In the books, Jerzy Zulawski takes an epic-sized view of human history and the colonisation of space (in the book, the locale of the planet is The Moon, although this has become an unnamed planet when it comes to the film), addressing issues about history, society and, in particular, the nature of religion.

Andrzej Zulawski adapts The Lunar Trilogy into a single film, condensing the scope of the books and also cutting much of the third book where the people of the Silver Globe venture back to Earth. The film began shooting in areas as diverse as Crimea and Mongolia, in the Caucasus Mountains and on the shores of the Baltic and Caspian Seas. In 1978, Janusz Wilhelmi, the newly appointed vice-minister of cultural affairs under the Communist government of Poland, saw the film’s political allegories as seditious and shut production down, demanding that all prints of the film and the props and costumes be destroyed. Despite this, Zulawski managed to smuggle a print out, while many of the crew hid props and costumes. Zulawski subsequently sought exile in France.

With the weakening of the Communist government in the 1980s amid the rise of the Solidarity movement, Zulawski finally found the freedom to complete the film. With an estimated 15-25% of the film unfinished, he replaced missing sections with footage of everyday scenes passing through the streets, villages and forests of Poland and himself narrated the missing scenes and story of what happened. (Zulawski can be seen very briefly in an image reflected on a shop window towards the end). The finished film had its premiere at the 1988 Cannes Film Festival.

Eastern bloc science-fiction is a very different beast to western science-fiction. While most American efforts can be broadly categorised as either monster movies, adventure/spectacle films or superhero efforts, Communist era science-fiction is much more ponderous and concerned with matters of the meaning of it all. Soviet films of the era – see the likes of First Spaceship on Venus (1959), The Heavens Call (1959), Storm Planet (1962), Voyage to the End of the Universe (1963), Andromeda Nebula (1967) and Moscow-Cassiopeia (1973) – were always about nobly venturing into space but proved stocky when it came to human elements. Poland made a handful of their own ventures into science-fiction around this time with the likes of Test Pilot Pirx (1979), The Golem (1980), The War of the Worlds – Next Century (1981) and Sex Mission (1984). The undisputed master of Communist era science-fiction genre was Russian director Andre Tarkovsky who made epic works such as Solaris (1972) and Stalker (1979).

The spirit of Andrei Tarkovsky hangs over On the Silver Globe. Andrzej Zulawski abandons all Western notion of tightness of pacing. He never quite goes to the lengths that Tarkovsky did where single shots could go on for an unbroken ten minutes or feature 2-3 minutes of characters sitting in silence. Yet there is very much of the Tarkovsky-esque in the long, slow shots, of scenes that seem to never carry the plot but feature characters sitting about silently or cryptically contemplating it all and, above all, the need to constantly philosophise.

It is during these philosophical digressions that On the Silver Globe travels into the undeniably pretentious. Imagine something akin to a Tarkovsky film crossbred with Zardoz (1974). Apparently, many of the actors improvised their own lines and these frequently travel into the incomprehensibly absurd. Take a random sampling:- “I keep forgetting I know everything but cannot remember anything,” “The actor wrings his face and he is like a bad mirror for beauty. The actor is the victory of ugliness.” “You are the gateway, you are the tunnel way. You are the light of the ultimate threshold.” The character of Marek seems to spend a good half-hour in the middle reeling around in anguish at the break-up of his relationship.

It is never an easy film to figure out what is going on. On the other hand, you cannot help but admire Zulawski’s visuals. During the early scenes with the astronauts trekking across the planet, you are amazed at the rawness of the natural landscape they travel across and the wild primality of the culture that grows up around them. The photography, the colour toning, the frequent handheld camerawork gives the film a savage splendour. The middle section with Marek’s arrival on the planet becomes visually stunning with Zulawski lining up vast armies of people in bird people costumes, taking us down into massive underground labyrinths, filling these with hundreds of people in orgies. Or images of the beach covered with bodies impaled on the tops of stakes and the camera craning up to see Michal Bajor there writhing in pain (and still rambling philosophy). Or the vast seemingly half-ruined mission control sets we visit back on Earth in the last section.

On the Silver Globe is a film that has greatness in its conceptual grasp. The scale of the storytelling is something that most science-fiction films never approach, something akin to what Frank Herbert did with Dune (1965). The visuals are epic in scale and amazing. Yet it is also elliptical, frustratingly vague and unclear on a narrative level, not to mention allows its philosophical rambling to go on and on and on.

Escape to the Silver Globe (2021) was a documentary about the making of the film.