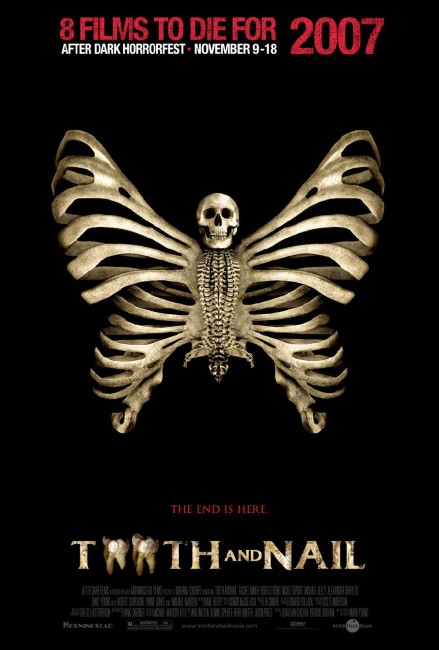 Society has collapsed due to the end of the world’s supplies of oil. A group of young survivors led by Darwin ‘The Professor’ maintain a small community in the ruins of a hospital in Philadelphia. Two of the foragers bring back a new girl Neon but this causes tensions within the group. In the night, someone slits The Professor’s throat – although in the morning the body has vanished and all that the others find is a pool of blood. As arguments ensue over leadership of the group, the building is surrounded by crazies. Neon recognises them as Rovers who subsist by eating the flesh of other people – the same ones that were responsible for killing her family. As the Rovers come after them, the group are forced to flee for their lives.

Tooth and Nail is another post-apocalyptic film. It came at a time when the great post-holocaust action film genre that had been sparked off by Mad Max 2 (1981) appeared to have run to a natural creative end. During the 2000s, the post-apocalyptic genre  started to move in cautiously more thoughtful directions – exploring drought ridden futures, different types of apocalypse, or where action was abandoned in favour of a bleak survivalism beginning with The Road (2009), an angle that was taken up by a number of subsequent films.

Tooth and Nail came in the midst of this period where the post-holocaust genre was clearly looking for new directions. The film doesn’t fully find them, certainly not enough to make a distinctive imprint on the genre, nevertheless is a step in a new direction. I am not sure if I buy the film’s set-up of an apocalypse being caused by the running out of gasoline – would people not have turned to some alternative such as electric cars or fuel substitutes rather than just let society grind to a halt? On the other hand, that is not what the film is about, it is merely backdrop for what happens.

Certainly, the opening scenes on a group of youths living in an abandoned hospital and their struggle and internal conflicts to maintain a communal society make for something interestingly different. It is as though Mad Max 2 had dispensed with its loner hero and instead placed its focus on depicting the small community that Max comes to defend during the course of the film. The tone is markedly different – less focus on action and the pulp poetry of social desolation, more on character conflicts.

This low key approach continues for twenty minutes. You eventually see that this is deliberate. It becomes a shock when the wasteland crazies enter and we see Robert Carradine’s throat being slit and a few minutes later Michael Madsen appearing and brutally hacking up Zack Robidas with an axe. Suddenly and rather effectively, Tooth and Nail becomes a film that is about a group of kids that have led a sheltered life being harshly thrust into the outside world and having to survive on their feet (although one finds it hard to think that someone could be sheltered in a world such as this). All of this looks promising.

Thereafter though, Tooth and Nail starts to lose traction and falls into standard patterns. It becomes yet another film about people at siege from anarchic wasteland crazies. Director Mark Young creates a moderate brutality, although most of this was surpassed by the overwhelming bleakness of The Road a couple of years later, which has a fairly similar plot involving the fight for survival and also featured cannibalistic crazies. Young creates some conflict but you are still left with the feeling that everything here could have been pushed for more than it is.

The film brings in some moderately well-known names – Robert Carradine as The Professor; Michael Madsen and British footballer turned actor Vinnie Jones as cannibal crazies; Michael Kelly, a rising supporting actor in films like Changeling (2008) and Man of Steel (2013), as one of the members of the community – but most of these are small roles as though the film lacked the budget to afford the actors for more than a few days at a time. The rest of the show is divided among the youth cast who all give strong and reasonable performances, with Nicole DuPort in particular showing herself up as a name to watch out for.

Tooth and Nail was the third film for Mark Young who has made a number of other works of genre interest. These include Southern Gothic (2007) about an undead preacher, the hostage drama/serial killer film The Killing Jar (2010), the monster movie Feral (2017) and the afterlife comedy Limbo (2019).